Why do the TO-220 79xx series voltage regulators conduct the input voltage to their heat sink? 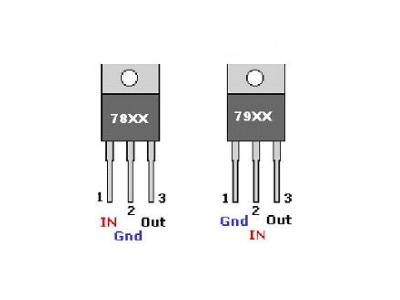 I find it somewhat dangerous to connect a large heat sink on 79xx series voltage regulators. Because, they transfer all the negative input voltage to the heat sink. Why just they didn't make the 2nd pin of 79xx series GND, as it is done for the 78xx series? GND is safer in some sense compared to large negative voltage levels. Is there any reason for their pin configurations being different?

Almost every TO220 packaged IC that you can obtain will have the most negative circuit point on the centre terminal and tab. "Insulated tab" versions are often available in cases where an exposed negative tab is liable to be a major disadvantage in many applications.

The reason for the negative tab is that this point is at the potential of the IC substrate or die - it is the lowest potential layer in the silicon construction for power purposes. Small signal voltages lower than this may occur BUT they are dealt with specially to ensure that the substrate is not reverse biased . Connecting this ground power level directly to the tab makes most sense thermally. Insulating it from the tab has a thermal penalty and makes cooling more difficult.

In the 7805 positive regulator the most negative point = ground = tab

Exception that demonstrates the rule:

An apparent exception to this rule (and an actual exception when the IC is in use) is the LM317 positive regulator which is a "floating design - the actual regulator is all above ground in normal use. In this case the most negative point when the LM317 is used as a voltage regulator is the "adjust" terminal BUT the tab is the output - which is 1.25 V more positive than the adj terminal when in use. A look at a block diagram f the IC shows that even this one obeys the "tab = substrate = most negative point" "rule". The digram below shows that tab = substrate = output BUT that the adjust terminal is then pulled to 1.25V below this level during operation. A minor node inside the IC is pulled to one Vbe below IC "ground" with the -1.25V appearing at the end of an internal resistor.

Not the answer you're looking for? Browse other questions tagged voltage-regulator heatsink isolation or ask your own question.