First Question for me. I have benefited from other answers here but have not fully resolved my problem. Here's my problem...

The LM311 Comparator output does not drive the N channel MOSFET fully on.

Any input or guidance is appreciated.

PSS-I realize that the pinouts for the LM311 are not right in my schematic. I have them right in my protoboard circuit. Its a single device. Pin 2 is noninveritng and pin 3 in Inverting 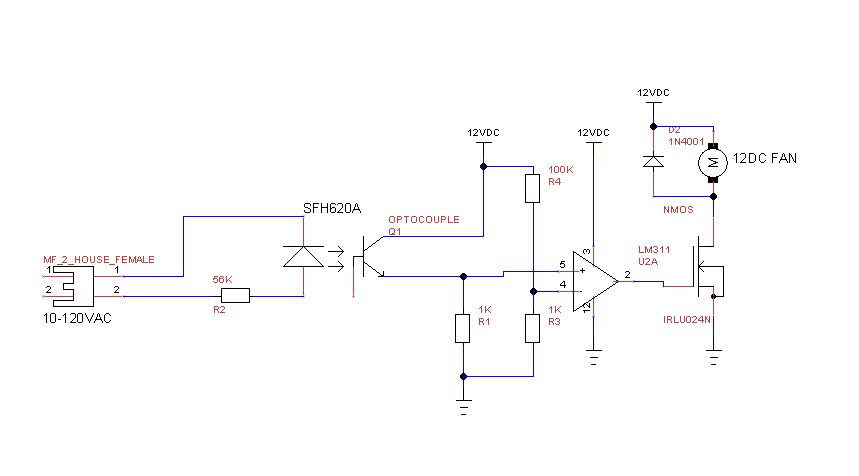 The suggested duplicate question and answer doesn't help for the following reasons: Both diagram and schematic are"No file found" making it pretty difficult to follow the answers. I am not using any positive feedback in my circuit as I don't think I need one. I have a simple pull up resistor to my 12V supply, not a voltage divider to the power supply as is mentioned in the answer. Thanks.

Just for the record I wanted to post a more accurate schematic and thanks for the response on using a Cap to hold up the opto isolator output. I actually have a full wave input to the phototransistor but I'm sure the cap will help anyway. To answer the last question, the Pin 7 comparator output has a pullup resistor to 12v. The issue is still that Vgs is only 10v when the comparator has 3v on pin 2 and 110mv on pin 3. I would have expected the LM311 output to go much closer to 12v (Vcc) with those inputs. The intent is for the FET to go completely on for pin 2 voltage > pin 3.

the maximum voltage output is around 3.3V and not at 5V. How would you explain that ?

how would you explain that the output is not exactly at 0V when the input is high?

Normally, when using a comparator, the output level when the comparator switches off is determined only by the power supply level. However, your circuit also has positive feedback via R52 and this will limit the maximum voltage. If you increased R52, R53 and the 1k by 10 times you'd see a bigger output voltage. Remember this is a comparator that relies on an output resistor pulling the output up to positive supply rail. If you used an op-amp (push-puul output) this wouldn't happen.

On the low side, the specs give a saturation voltage of 0.23 to 0.4 volts with 8 mA load. Your pull-up circuit will draw about 11 mA, so the output low voltage may be a bit more than the spec'd 0.4 V.

The basic problem with your circuit is that the mains voltage is AC, so the LED in the opto-isolator only lights up during positive half cycles and the comparator gets pulses at 60Hz. What looks like 7V, 8V or 10VDC on your meter is actually a square wave which is on for less than 50% of each AC mains cycle.

The graph below is an LTspice simulation of your opto-isolator's response to the AC mains input. The output voltage (green) is 1.6V average so your meter will show 1.6VDC, but the comparator will convert it to a 60Hz square wave with an on/off ratio of less than 50%. 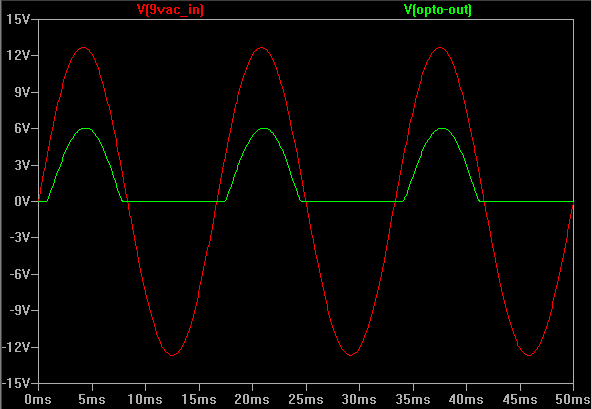 To get a continuous DC output you need some way to fill in the gaps between each half cycle. The simplest solution is to add a capacitor across R1 which charges up during the pulses and discharges more slowly between them. If the capacitor is large enough then this should produce a relatively smooth DC voltage which is equal to or higher than the original the meter reading, but with some 'ripple' caused by the capacitor discharging between half cycles. 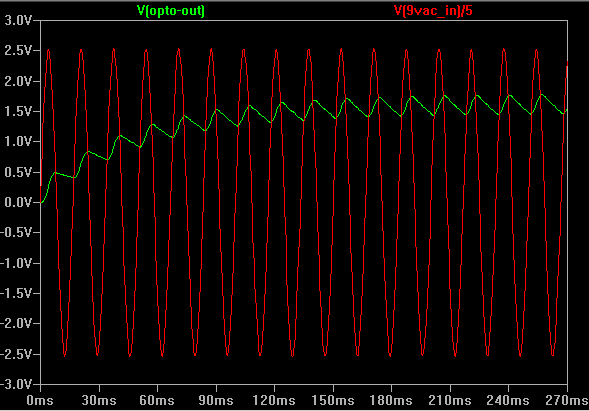 If the capacitor is too small then instantaneous voltage will drop below the comparator threshold between half cycles, but if it is too large the response may be too slow. As a starting point you can apply the RC time constant formula T = R x C (where T is the time taken for the voltage to drop to 37%, R is R1 in your circuit, and C is the required capacitance). Make the time constant much larger than 16.7ms (60Hz cycle time).

Looking closer at the SHF620A datasheet it appears to have two LEDs back-to-back, which produces output on both positive and negative half cycles. However this 'rectified' output will still follow the AC, dropping to zero at each crossover (the output waveform will just have two 'humps' per cycle instead of one). This will be easier to smooth due to the shorter time (~8ms) between peaks. With R5 = 10k a 2.5uF capacitor in parallel would produce about the same ripple as in my simulation, while 4.7uF would make it even smoother but with similar response time.

The IRLR024N is virtually fully turned on with 10V Gate drive (datasheet shows <0.1V drop at 1.5A). The way your comparator is configured the output should go to 12V, but if the input is dropping below the threshold for 17% of the AC cycle then your meter would only read 10V - even though the FET is fully turned on 83% of the time.

Diagnosing pulsing waveforms with a multimeter is tricky because it only shows the average voltage. To see what's really happening you need an oscilloscope. Even a cheap low bandwidth scope such as the JYE Tech DSO138 is fine for mains frequencies.

Not the answer you're looking for? Browse other questions tagged mosfet opto-isolator comparator or ask your own question.