When working with surface mount components with different pitches, or with mechanical dimensions on different grids, the situation inevitably occurs that you have two wires or lines that need to be connected, but neither are on the current grid - in fact they may not end up on any sensible grid.

As an example, here are two lines, neither on the routing grid, which must be connected together to form a right angle (or mitred join). 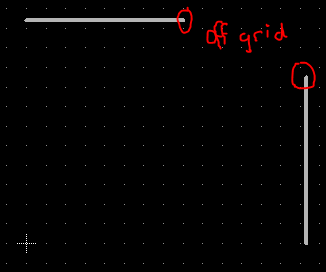 When these are traces being routed, it becomes fairly straight forward as the route tool allows for snapping to the ends of air-wires, so you can simply click on one end and then have the route snap at the other end.

However when such lines are not traces - such as silk screen lines or dimension lines, the snap doesn't work. You can CTRL+LeftClick on the end of the first line to start routing, but Eagle won't let you snap to the end of the second line.

You can also drag the ends of the lines so that they overlap, however there is no tool to intersect two lines unless the end of one lands exactly on the other.

The question arises as to what the simplest way of joining these wires?

There are actually a couple of ways to do this if we assume that both lines orthogonal. If they are not, neither of these methods will work, and you have to instead do a series of trigonometric calculations to work out the intersection point.

Personally I find this somewhat of a pain as you have to open each dialog box twice and copy numbers between them. It also means you have to make sure you have the correct end of the line and it's easy to get mixed up.

I have recently come across a simpler method which doesn't require opening the properties boxes, so I figured I'd share it.

Once you get used to the process, this approach is far faster than trying to merge them using the properties dialog.

Not the answer you're looking for? Browse other questions tagged pcb eaglecad or ask your own question.

29
Do you layout in mil or mm?
29
Finding air wires in Eagle
46
Competing PCB Crystal layout recommendations
2
Eagle PCB pad vs SMD
3
Use of grid in PCB design
6
What are the advantages and disadvantages of Manhattan-Style routing?
0
EAGLE Multiple PCB layouts