I have a power supply to power up a 8W LED board and a raspberry pi. 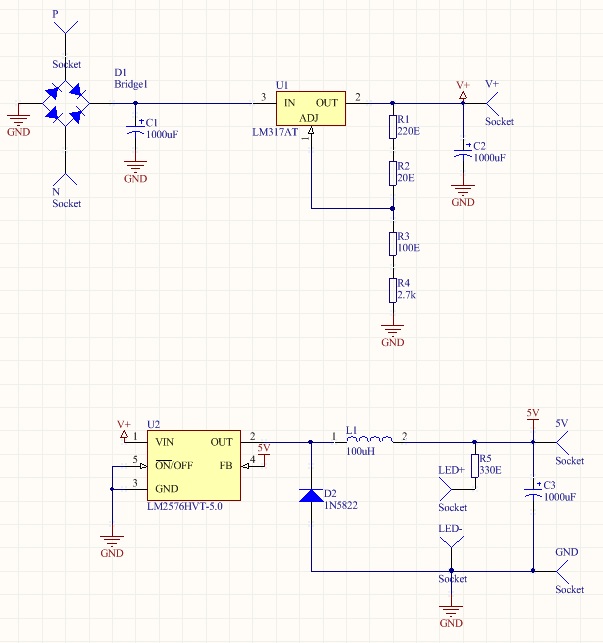 I have used a 24VAC (12-0-12V) 2A transformer to feed the bridge. I have also used a LM317 to provide a voltage of approx. 15.8V for the LEDs and the output is also used by the LM2576 to provide the 5V for the RPi. The V+ socket is connected to the LED PCB through a switch and the return to ground is an unbroken connection. The Rpi is always ON. The LEDs consume 500mA at 15.8V and the RPi consumes a maximum of less than 1A at 5V (measured using an ammeter).

When I power ON, with the switch connecting power to the LEDs (full load), the circuit works without a problem. However, when I switch of the LEDs after power ON, soon after a few seconds the RPi also goes down. The 5V output is now 2.3V and not sufficient for the RPi. The V+ reads 2.8V to 3.3V. Even if I power On without the switch connecting power to the LEDs, the RPi soon shutdowns due to low voltage.

This is really puzzling for me. How can a power supply work fine at full load but fail at lesser loads? Has anyone had such issues before and if so how did you solve it?

Your LM317 is regulating from 24V down to 16V, that is 8V drop. And you are drawing 1.5A. So regulator has to dissipate 12W of heat. You must use proper heatsink. The same applies to your buck convertor.

Put the lm317's output on a scope. That chip is known for being a little "ringy" under transient loads, and with that 1000 uF on the output it could be going unstable.

Not the answer you're looking for? Browse other questions tagged power-supply power raspberry-pi lm317 failure or ask your own question.