can you explain me the working of this circuit in detail? [closed] 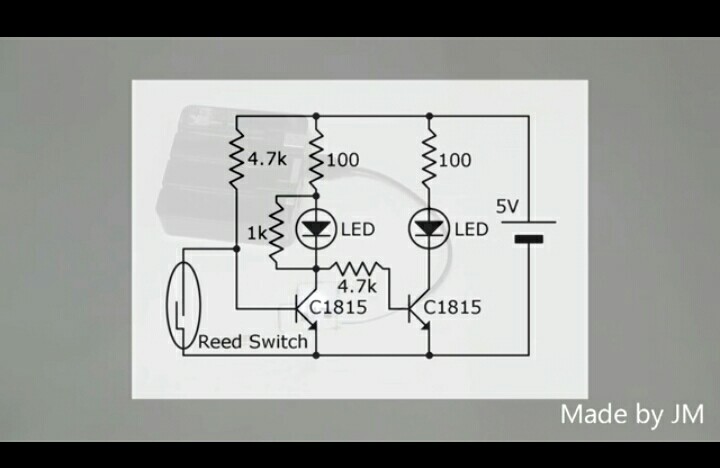 this circuit is a occupancy light circuit i want to know the working of the transistor regarding base,collector and emitter in the transitor

You really should use component designators in your schematics. Lack of them makes it more difficult to talk about the circuit, so I'll be more brief.

Consider what happens when the reed switch is open. The first transistor is on, lighting the first LED. The collector being low also turns off the second transistor, which keeps the second LED off.

In summary, one LED is always lit. The reed switch state governs which one.

Not the answer you're looking for? Browse other questions tagged circuit-analysis switches power-electronics reed or ask your own question.

1
Turn a LED on and one off, with a single Reed switch

2
Why this simple DC Motor + PWM circuit is not working?
3
How is the current through resistor same as collector current in this circuit?
1
Finding the output resistance of this circuit
4
Is this NPN with base grounded and collector at negative voltage functional?
0
Can you explain the resistors in this PIR circuit?
0
What are the real world limitations of using a transistor as a switch?
1
Identifying parts of a transistor die
0
How do I know that this BJT is in the saturation zone without having to simulate it?