I have been given this problem as Homework and I can't seem to figure this out. It seems that the only thing I have is emitter current Ie. However, it is known that BJT is in saturation mode, so I can't think of a way to find Vb, Ve, Vc, Ic, Ib. Assuming Vce = 0.1V for saturation and Vbe = 0.7V 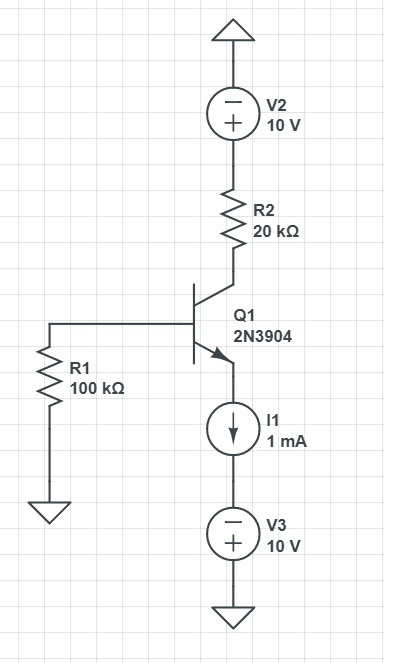 Think you can solve that for \$V_C\$? If so, do you think that may help solve all of the rest, as well?

Not the answer you're looking for? Browse other questions tagged transistors current bjt or ask your own question.

2
Bipolar transistor as a switch
1
PN junction voltage drops in a Saturated BJT
4
Reading BJT Transistor Datasheets. Two different values for collector emitter voltage?
0
Determining Voltage gain in a BJT amplifier
0
BJT cut-off currents magnitudes and directions
0
Transistor as a Switch in Cutoff and Saturation
1
Can I do KVL around transistors? (MOSFET and BJT)
0
Transistor - Saturation and Active Regions