Collector must be more positive than the emitter

My book (The Art of Electronics by Paul Horowitz and Winfield Hill) is stating something that seems to be the opposite of the example it is using. I am not going to school for my studies so I apologize for having no go-to resources but here. Can anyone shed light on where I'm getting confused? 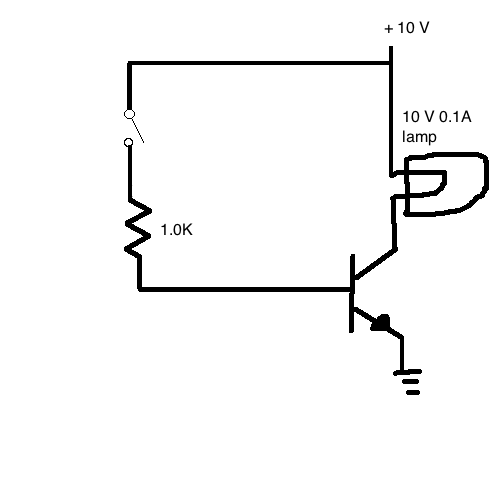 I'll type out the relevant bits: "A transistor is a 3-terminal device available in 2 flavors (npn and pnp), with the properties that meet the following rules for npn transistors: 1. The collector must be more positive than the emitter. 2. .... 3. .... 4. When rules 1-3 are obeyed, IsubC is roughly proportional to IsubB and can be written as IsubC = (hFE)(IsubB) where hFE, the current gain (also called beta), is typically about 100. ... When the switch is closed, the base rises to 0.6 volt (base-emitter diode is in forward conduction). The drop across the base resistor is 9.4 volts, so the base current is 9.4mA. Blind application of rule 4 gives IsubC - 940mA (for a typical beta of 100). This is wrong. Why? Because rule 4 holds only if rule 1 is obeyed; at a collector current of 100mA the lamp has 10 volts across it. To get a higher current you would have to pull the collector below ground."

What they're saying is that if IC were 940mA then VE would have to be higher than VC. Since the voltage follows rule 1, IC cannot be 940mA.

Assuming the switch is closed, the collector is at a few hundred mV in the example, not 10V.

The transistor stops having gain (Ic/Ib = HFE) as the collector voltage approaches zero.

Not the answer you're looking for? Browse other questions tagged transistors emitter hfe or ask your own question.

10
Why can't you go sticking a voltage across the base-emitter terminals in a transistor?
2
What is “pull the collector below ground” and saturation
4
Is the current gain value constant for a single BJT ?
0
Understanding transistor circuits
3
Art of Electronics: Transistor switch
1
BJT Transistors
3
Why is the collector current I_c for a normal common emitter BJT circuit LARGER than that of the Darlington transistor circuit configuration?
6
Art of Electronics 2.5 - Transistor saturation
0
Calculating base current without knowing current amplification