transformer primary/secondary resistance don't behave by rules for me

I've got an RLC meter which I can set so it's a fixed AC voltage amplitude source. I'm using a planar coil of 25 turns and in theory, when a secondary resistance increases, so should the primary. But this is not what I observe.

When the coil primary coil is isolated, the resistance is just the resistance of the wire, the reactance is high, so the current flowing is comparatively small.

But in induction heating if we increase the temperature of the load (effectively increasing resistance) the resistance felt by the primary also increases. So why do 2 different experiments give 2 different results?

EDIT: I've done some more testing and found out that the resistance of the primary actually increases if I add resistors to the secondary to about the same resistance that the primary had on it's own. Any more resistance, and the primary resistance starts to fall. It has something to do with the power transfer but I don't know exactly how. And I'd like to find out.

This is all fine, but I don't understand what is happening with resistance. Because it increases.

I'll try to explain. RLC meter measures imedance Z of the coil and converts it to one of possible representations. What are talking about (I guess) is representation by series R-L circuit:
Z = R + jX,
where R is resistance and X is reactance. 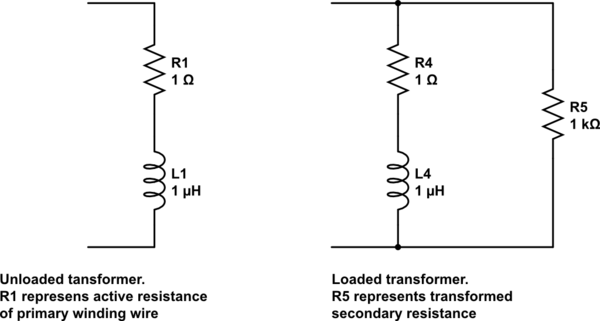 Here you talk about parallel R-L circuit, where inductance of primary coil (with it's own small series resistance) connected in parallel with transformed impedance (resistance) of secondary. But this parallel R is not that resistance, that your RLC meter shows in series representation mode!

EDIT:
At a given frequency the same imedance value Z may be achieved (or modeled) by various equivalent circuits, for example, parallel Rp and Lp, or series Rs and Ls. It's just an algebra. Which one to use it's your's discretion. In a frequency range it's likely that Z will be a function of frequency and equivalent circuit values may vary too (or not). So, the equivalent circuit that uses fewer componens, which values are frequency indepenent (or less dependent) will be more appropriate model of real object. Let's get back to the transformer. When it is idle, impedance of the primary is almost reactive (inductive). This can be modeled by ideal inductor in series with small Rs:
Z = Rs+jXl, or by ideal inductor in parallel with large Rp:
Z = 1/(1/Rp+1/jXl).
(If Rs much less than Xl, then Rs/Xl=Xl/Rp.) For idle transformer the series cirquit is more adequate, because Rs corresponds to the primary coil wire resistance. When active load appears it increases active (in-phase) part of primary current. This may be modeled by increasing of Rs or by decreasing of Rp. In case of heavy load (when wire resistance becomes negligible contributor to primary impedance) parallel equivalent circuit becomes more convenient, because Rp corresponds to (transformed from secondary-to-primary) load value.

Take a look at these links, they may not explain your observations directly but they will confirm which is the correct theoretical answer (what direction you should be looking into), hopefully they will help you "debug" your experimental process.

I hope this helps a bit!

Not the answer you're looking for? Browse other questions tagged transformer induction or ask your own question.