Calculate the electric bill of a phone charger (AC adapter input or output?) 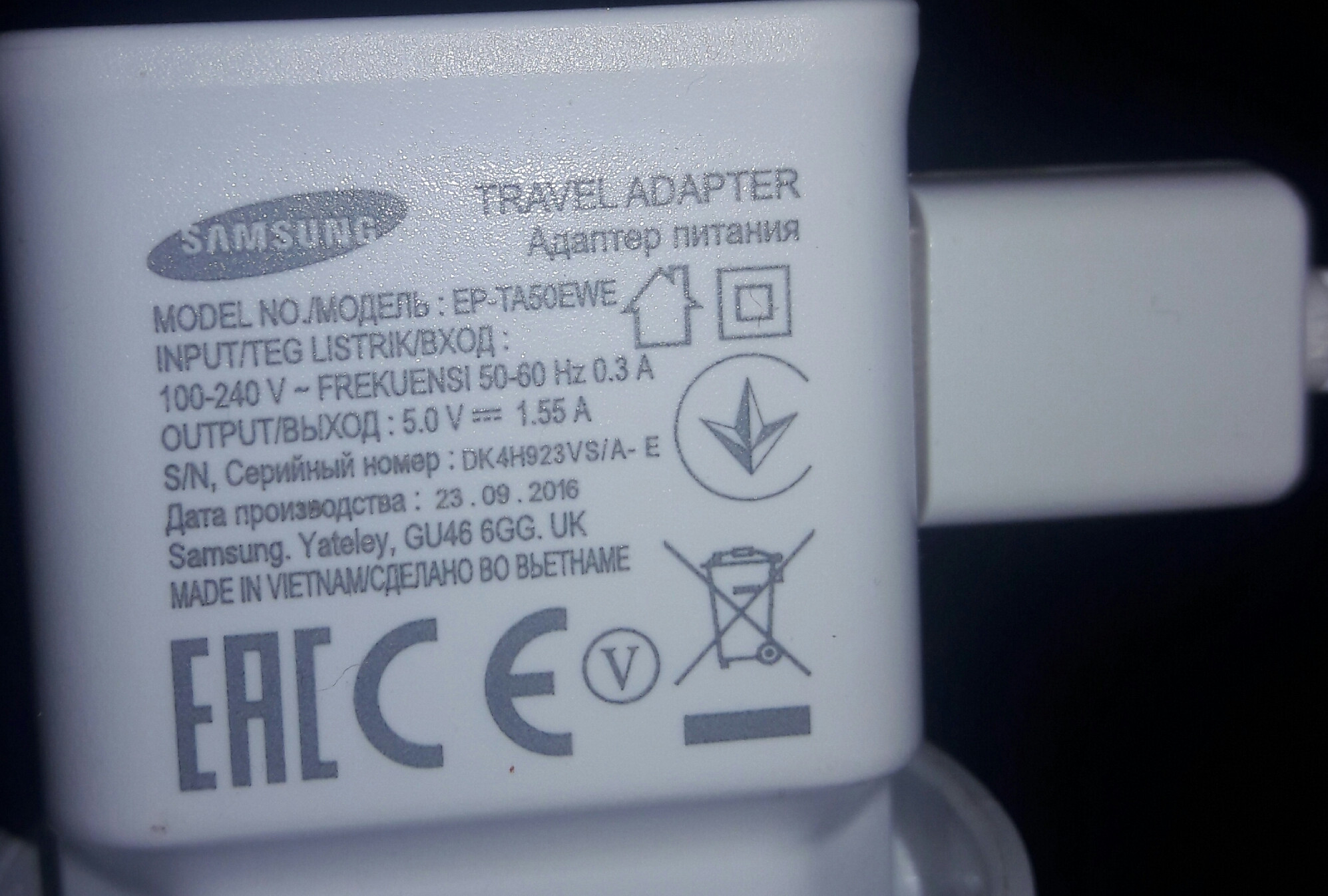 I know that I need to calculate the watts then kWh, so I multiplied 5 V by 1.55 A to get 7.75 watts and then use that to calculate kWh. I'm so confused though because whenever I asked anyone in my school they would say, "you don't pay for the output, you pay for the input, so what you did is wrong".

Are they right? Why or why not? What is the correct method?

Note: I'm not looking for a very accurate number because I don't wanna use a Kill-a-Watt. In addition, I watched a video of someone using it on their charger and it gave a number around 4 or 5, that makes me think my teachers are wrong.

Those numbers tell you the current that the supply can provide, not how much your phone needs. Your phone will only draw as much as it's designed for, and so you don't know how much power is coming from the mains. So, they are correct. You can't get anything meaningful from the adaptor text itself.

They are correct that you pay for the input. Now the question is, "How do I calculate the input when I only know the output?"

We need one more piece of information: the efficiency of the PSU. For this type of device it should be about 85%.

where Eff is efficiency.

From this you can calculate your watts and multiply this by your hours of use per year. Note that your result will be on the high side because the charger will taper off the current as the battery becomes charged and eventually drop to a trickle.

Yes they are correct, you need to consider the efficiency of the supply. Also the nameplate will not necessarily reflect what is happening under the hood, as it were. The phone will draw a great deal of current while charging and the adapter will waste a certain amount getting that power from the mains plug. When the charging is finished the current will drop, but not to zero since most phones will continue to operate from the adapter while plugged in, leaving the battery at 100%. Finally, when you unplug the phone but leave the adapter in the wall, the power supply will waste power just sitting there (efficiency drops to zero since there is no useful output current).

After the battery is charged it will drop considerably. With the phone unplugged the draw will be no more than 0.3W, so if we assume the phone is drawing no more than 0.5W with efficiency in the 70% range, we get 1W consumption while the phone is just sitting there after having charged. If you leave it plugged in 24/7 the total consumption is less than 0.05kWh/day. If your electricity costs you $.15/kWh it will cost around 50 cents a year to keep your phone charged.

In fact the charger is bound to be a bit better than the minimum required, so probably somewhat less. Also it will never discharge if you leave it plugged in all the time.

Note that the charger can use a significant part of the total consumption just plugged in and idling with no phone connected. This "vampire power" adds up with millions of adapters so connected, and governments have been tightening the regulations on quiescent consumption.

First, the cell phone itself will not have a constant draw down the USB side. Obviously it will throttle back to almost nil when fully charged, but it will also vary during charging based on the battery charging curve and other phone load (e.g. Plugged-in usage).

Second, the charger is not 100% efficient, and even that efficiency is not linear.

The 0.3A figure is the nameplate rating and is useless. Its purpose is to tell electricians how much power to provision for the device; i.e. If she is wiring a cellphone factory or cellphone store, can they wire all the kiosks with one 20A circuit or will they need 3. This figure accounts for worst case use x power factor** x whatever fudge factors UL wants to see in order to approve the item. On your charger the difference between rated input and output is 28 watts, that can't be real, something that small would get too hot!

Back to the Jello-nailing, I would guesstimate the rating of the phone's charger (typically 5w) and then double that to account for inefficiency (10W) , for the runtime of the recharge (e.g. 2 hour). Watts x hours = watt-hours. Divide by 1000 for kilowatt hours.

Americans pay typically 10 to 20 cents per kilowatt-hour of power.

** Power factor is the ratio between the power you actually use (cherrypicking parts of the AC sinewave), and what the transformer/wiring must carry to deliver the entire AC sinewave. For instance if you use a half wave rectifier, your PF is 50%.

There is another, potentially more accurate way to estimate the cost of one phone charge. The idea is based on capacity of phone battery. Say, you have an old Samsung S4 phone. It has an internal battery with 9.88 W*h capacity, say 10Wh.

Since your power meter is always on external AC side, you need to consider efficiency of the entire power supply chain. You have two converters, one is the wall adapter. It is a modern adapter, and therefore should be no less than 80% efficient (you need to check with standards). The second converter is inside the phone charger circuitry, so assume the same 80%. The battery also has some losses during charging process. I would say 95% efficiency.

Given the statement by Transistor this post has been heavily edited for his and others elucidation.

W and Wh are interchangeable.

Regardless of the comments below, there is a bit of nit picking going on here with regards to kW and KW, I am sure people understand what is being meant and that temperature is not being talked about.

That over with, just to explain a few points with my earlier post for those who saw it.

PSU's designed for the Eu and USA have strict tolerances they must meet, however that does not mean that every PSU made outside of those areas will comply with those regulations. Some low current PSU's are half wave rectified and rely on a tuned circuit at mains frequency to provide 5V @ XmA for use in low power circuits. Please see http://ww1.microchip.com/downloads/en/AppNotes/00954A.pdf

However I ripped apart a Samsung charger yesterday to find a switch regulator circuit. The efficiency of these are stated to be between 75% - 90% + any losses within the circuit. Again these losses are so small that its really not worth mentionig, unless you want precise, which is just not worth it in every day life or it is a cumulative circuit where the sum of the losses are important. I tend to look at switch regulator supplies as lower current devices, just to differentiate between switched mode regulator and switched mode power supply(multiple Voltages and higher currents), although strictly speaking you will find a switched mode regulator at the heart of a switched mode PSU.This stems from a work nomenclature where I want a SMPS does not mean I want a switched regulator.

There are a number of factors here with regards to charging and efficiencies. the latter you only need a rough figure for and best to take worse case scenario( and easiest calculation for) of 75% to calculate power loss.

So if we wanted we could just say that the actual W used would be 25% more, than that quoted for the output power, which would be approx 9.375W or if you want to go through the rigmarole of calculating Wh to find it means the same thing go ahead.

I could go on about charging batteries and characteristic curves for each of the devices used, however all you wanted was a rough figure and a way to get to it :)

So saying that I have seen others state things that need modifying a little. When a flat battery is put on charge it will, given the Voltage stated, want to suck current at its maximum of 3A, however as the PSU cannot provide this it will hit the limits of the supply current and the % efficiency may drop as low as 50%/ As current rises above the stated value, the efficiency of a switched regulator goes down Many Switch mode PSU's however have fold back current limiting to stop this, unlike these little switched regulator supplies. What will happen here, if left unfettered, is that until the battery has enough power to balance out at the figures given, charge rate will be slow and power consumed will be high. As the Battery power levels increase, the stated figures will apply and the efficiency will increase, that is until a low charge current is required and again efficiency will decrease. Most cell phone batteries do have battery management so can turn off and limit the current supplied for each of these conditions. Whether they do or not is solely down to the manufacturer/design team. Fast chargers work on the principle that the temperature of a battery is used to regulate charge applied, ergo hitting a battery with a large current will charge it fast but temperature rises at the same time. At a given temperature current is turned off, and the battery is left to cool down below a set limit, before charge current is again applied. Doing it this way should show you that calculating the power used is not simple, however fast charging is never very good when used regularly, as the battery material will degenerate faster. Maybe the next generation of fast charge batteries will be better, 12 minutes for a 4000mAh battery is touted.

Not the answer you're looking for? Browse other questions tagged battery-charging charger adapter watts ac-dc or ask your own question.

4
How to determine the total number of charges a portable charger can supply for a phone?
0
Phone charger reading no amperage?
8
AC adapter: Input power vs Output power
2
Battery charger output power higher than input?
0
What is internal battery dc voltage and how do I calculate some battery specs?
0
phone charger residual electric flow
0
Why does it take so long to trickle charge an AGM battery to the point where it matches the self discharge rate?