How to make this switch to act more realistic in LTspice

A series RL circuit is connected to a voltage source for a very long time and passes 1A constant current.¨

All of a sudden a switch between the voltage source and the RL circuit is opened and the circuit is let alone with its natural response as below switch 1 to switch 2:

I wanted to illustrate this by using LTspice. So I set the initial current for the inductor as 1A and used the built-in switch component in LTspice as follows: 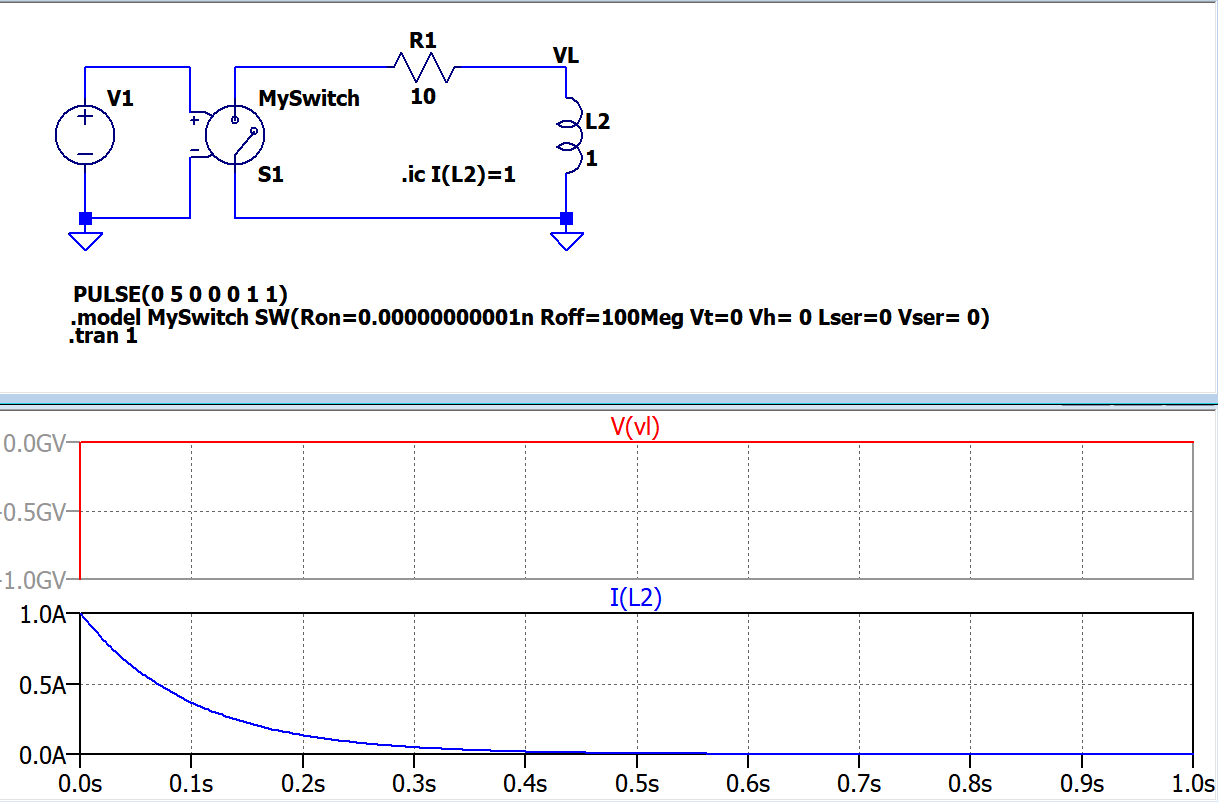 The current I(L2) in the above plot is exactly how we predict in real life and obeys the first order differential equation solution ect.

The inductor Vl's behaviour above is also how we would predict as it starts from a negative voltage and ends up as zero, as a back-emf.

What could be added or adjusted so that this switch causes more realistic back-emf?

The trouble with all the switches in LTSPICE and others is that they are not switches. The are resistors with different values. Note your Roff is 100Meg and you are starting out with 1A in the circuit hence the big values.

If you want it to act like a real life you would need to add some parasitics, especially capacitance back to ground. But that wont help you with the switch closed.

You could try an .ic of 0V at the top of the switch though

Ultimately, you would be better to show the whole schematic of the original and have two switches that do the changeover.

You are opening the switch, which is very different from shorting the R-L circuit.

If you change the voltage source to a dependent source and give it a step from (say) 1V to 0V at 0+ you'll have a situation similar to the image.

Just because it shows a switch does not necessarily mean you need to simulate a switch.

Not the answer you're looking for? Browse other questions tagged switches ltspice back-emf or ask your own question.

2
Back EMF of an inductor in a DC circuit?
1
How realistic is this model for an inductive spike?
1
Can every voltage source accept fly-back diode's current?
0
Decomposing a waveform in LTspice to view only the transient component
2
How to simulate constant current - constant voltage source in LTspice
0
LTSpice: simulate transient voltage and current in RL-circuit
0
How do we reduce or nullify the back current from the wheel motors of the modern electric vehicles?
3
Solenoid and mechanical damping, options for ways to minimize
1
Why does the measured back-emf decrease when R is shorted in this circuit?