Should Resistor be before or after an LED series [duplicate]

I am still trying to figure out the very basics of electronics, or certainly the parts I need to know for what I am trying to do.

I've got the very basics (when it comes to using LEDs). + is Positive - is Negative. Resistors are required in order to pump 12v through 3.3v LEDs without burning them out. I can chain 3 LEDs in series per single resistor.

This is where I get confused, and I am not sure if it is just the online simulator I am using that is confusing me.

So, for example, take 5 chains of 3 LEDs (3.3v) with a 120ohms resistor (as suggested by the LED series/parallel array wizard.

Should the resistor be placed before or after the LED? Or more specifically, the 12v side or the ground side?

Wouldn't both burn out the LEDs as they are only meant to have 3.3v? Or am I massively misunderstanding all this? 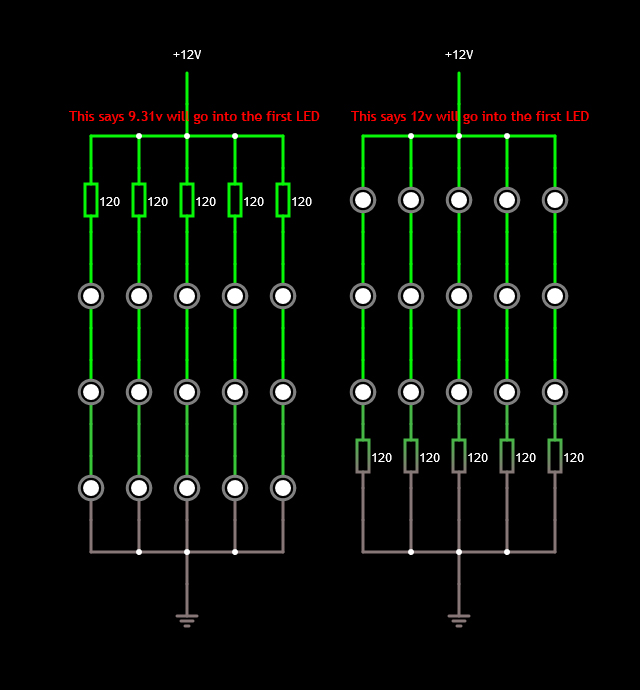 Edit: I was told to edit my post to explain how my question differs from another. The reason for that is I know very little at this point, and I didn't understand a word of the other question. It helps me to understand by wording it in a way I understand. I can then translate my own understanding based on the answers I receive. Thanks

Instead of looking at the potential ( voltage going into the led) you should look at the voltage across the led.

As others have mentioned it does not matter where you put the LED in the series chain. You can even put them in the middle if you want.

However, there is another factor not discussed here so far.

If the LEDs are remote from the source, you really do not want to pass the raw power rail through the wire that goes to the LEDs. The reason being, if there is a short to ground out there somewhere you are shorting your entire power supply. As such, it is normal practice to put the resistor on the high side to provide a little protection.

Writing that 9.31V or 12V will go into the first LED makes no sense. In reality, there is no such thing as a voltage in one point. Only voltage differences between two points exist. The ground at 0V is only a convention. Each LED will only see 3.1V between its pins.

This is a common misconception that every beginner including me had once. In a circuit with an LED and a series resistor, the only thing you have to worry about is the voltage applied across them, and whether the total current flowing through them, exceeds the current rating of the LED. Say if the applied voltage Vin > LED's forward Voltage (3V), then current starts flowing and a voltage, V = (Vin - 3 ) volts drop across the resistor and a current = V/R flows. If you still want to think " what goes into LED first ? ". Just check how is the current flowing. No need to think like "voltage goes into LED first "

Not the answer you're looking for? Browse other questions tagged resistors series or ask your own question.

0
Leveraging DC series circuit to power higher voltage LED panel
4
LED Voltage Drop in Series
7
12V LED strips in series with a 24V power supply?
1
LED resistance calculation for combined Series/Parallel Configurations
1
led lights resistor
4
Is there any pitfall to using resistors in series AND parallel for an LED array?
1
24V supply run 12V 3014 LED strip in series; help with resistors for series
0
Why does LED dim when adding second LED in parallel with a single resistor
13
Do I still need a resistor in this LED series design?