How negative feedback increases the bandwidth

Can you explain how negative feedback affect the bandwidth ?

You have to realize what Bandwidth actually means.

Let's take an example of an amplifier. It has a frequency response as shown below:

This amplifier has a voltage gain of 1 Million but a bandwidth of only 10 Hz.

This plotted gain of this amplifier is the maximum it can do, there can never be more gain than this. From the plot it is easy to see that the maximum gain depends on the frequency of the signal. At 1 Hz the gain can be 1 Million but at 10 kHz the gain cannot exceed 1000.

Since Gain x Bandwidth remains constant and we reduced the gain by a factor 1 million/100 = 10 thousand we can expect the bandwidth to increase by a factor 10 thousand so that would make 10 Hz time 10 thousand = 100k Hz. Which is where the blue dotted line crosses the "open loop gain" curve.

The resulting transfer curve of the amplifier with feedback would then look like the green curve on the plot below. In the plot below the blue curve is the open-loop gain. Please do not compare the numbers in both plots, I just pulled these from the Internet, they do not apply to the same amplifier. It is the shape of the curve and the relation to the open-loop gain curve what matters. 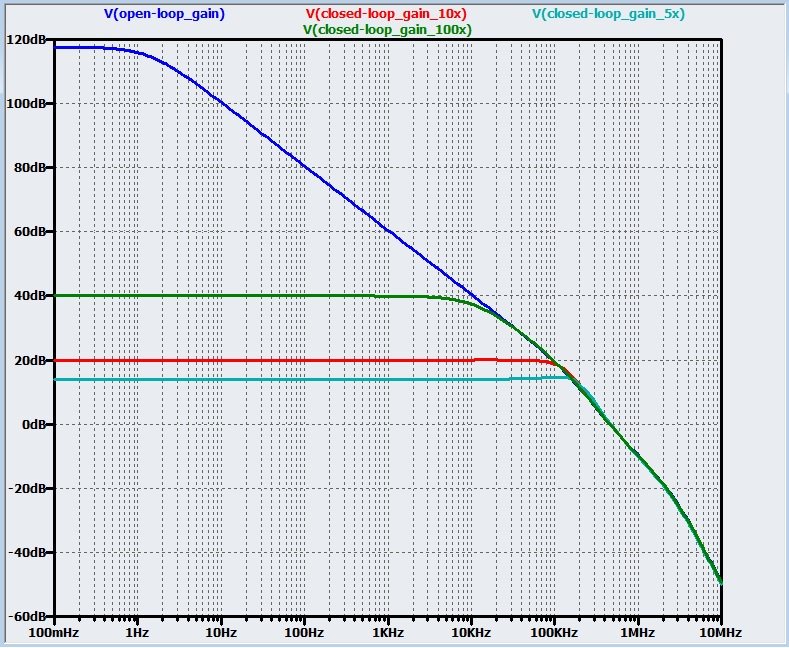 Not the answer you're looking for? Browse other questions tagged feedback or ask your own question.

15
How does this inverting opamp circuit with adjustible bandwidth work?
0
Bandwidth and Gain bandwidth product