What is the best type of magnifier to use for general electronics duties?

Ask Question
Asked 11 years ago
Active 3 years, 7 months ago
Viewed 44k times
9
votes
\$\begingroup\$
Locked. This question and its answers are locked because the question is off-topic but has historical significance. It is not currently accepting new answers or interactions.

I am looking for a magnifier tool for an electronics workbench and was wondering what sort of product would be best.

The device must be an all-rounder capable of doing some SMT as well as through hole stuff.

I reckon that something like this would be about right, its a 1.75x 7' ring 28w magnifying lamp. Is this going to be a usefull addition to the bench? 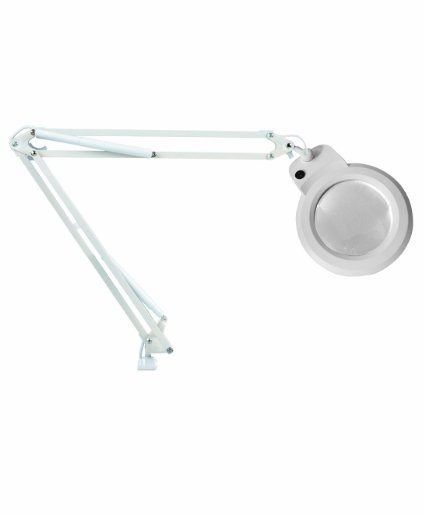 I've got one of the square ones on my desk at work, and I can't get used to looking through the magnifier. For me, the magnification benefit is cancelled out by the distortion. Moving my head moves the view and focus far too much to be useful, and my hands aren't where I see them, and, because I can see my wrists, my arms get confused. Maybe I'm just dumb, but it doesn't work for me - Some of my coworkers do all of their work under one of those.The light, however, is very nice - The color doesn't make my eyes tired, and I always have it on when soldering. Sometimes, I tolerate the distortion because placing the light between me and the soldering iron redirects the fumes out of my face.

Since you asked, the best magnifier is a stereo boom microscope, and they're priced accordingly (Think $1000-2000 for an industry-grade model). Think of the question "What is the best power supply." The answer is the $1500 Agilent, but a modded computer PSU will also work. That's the contrast between the stereo scope and the boom light.. We have models like this in the labs at my school and work; if you need the best, and can afford it, this is what you want. Maybe you're starting a business or something, I don't know. It's got to be stereo, because that's what gives you depth perception. A ring light around the lens is also a necessity; at high zoom, the ratio of the lens to your pupil diameter divided by the magnification means that a lot less light is going to your eyes. Something in the range of 8-40x zoom is good for soldering, you won't need more unless you're a magician with your soldering iron. Most of the time, 8 to 10x is adequate, and I just zoom in for inspection.

Scienscope carries more reasonably priced ones than the name-brand Luxo (Reasonable being $600+light source), and other stereo boom scopes run for around $500 on eBay. You can also get the traditional microscope style instead of of the boom, like the National Optical 400TL that you used to look at frog livers in high school for as cheap as $175 new, or look on eBay.

Get some cheap loupes and learn how to stick em in your eyes so you have both hands free for soldering.

I use the Luxo 17113, KRM Series, 3 diopter lense on my bench. The combination of the light and magnification is excellent. The Luxo looks similar to the lamp you linked to.

I also use the Bausch & Lomb 81-42-00 visor. It comes with 3 Lenses 1.8x, 2.2x, 2.6x Magnification Power. These were around $40 or so from Amazon. I have a pair on my bench and a pair in the garage. These work quite well but when I work on the bench I only use the lamp + magnifier. The portability of the visor is a major convenience. The multiple lenses is also handy.

I do primarily SMD soldering. My other tool picks are at http://wiblocks.luciani.org/FAQ/faq-tools.html

The best magnifiers for electronics work are the Mantis range from Vision Engineering. Expensive, but the best. the x4 magnification gives about the right balance between magnification and field of view. Unlike a stereo microscope, you get a small amount of 3d effect by moving your head around, and you can also move it about hands-free with your forehead!

I personally prefer the square style magnifiers, something like this.

I'd also recommend a good "third hand" type of device, i use a panavice unit they make a ton of different models though with various attachments and arms.

I use a cheap stereo dissecting microscope (20x) for small surface mount assembly. It's Chinese, and cost about £60. The optical and mechanical quality are surprisingly good for the price.

Lakeland Microscopes. I got the SM20.

The boom version would be better, but costs a lot more. I have thought of making my own boom.

The techs where I work invariably have something that looks quite like what you linked to, I don't know what the brand would be, but the concept is the same. Large area, illuminated, on an arm so you can position it for hands-free use seem to be the critical requirements.

I use an Edsyn MA10 magnifier headset for SMD work. It comes with 2.5x lenses, and 5x and 7x are available as extra lenses. 5x lenses work best for me.

Ooh, you can also use a digital camera in macro mode! 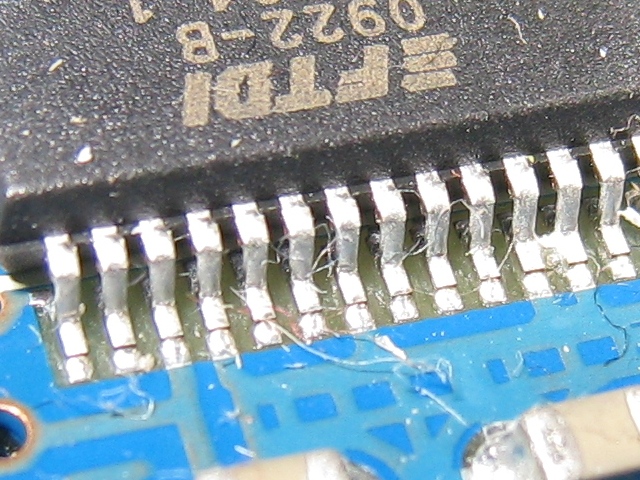 I just took that with my 8 MP Powershot SD870, and I totally can't see that much detail with a 10x loupe.

I bought a little USB digital microscope for about Euros 60 whilst in Italy. It has a 30x ~ 220x - can capture stills as well as video. A very nice gadget to have.

I am not suggesting that it is a stereo optical microscope replacement, but is a beautiful tool to have on the bench.

Well worth the money.

I've had good luck with my Donegan OptiVisor headband magnifier (model DA-5 gives 2.5x mag, which was a nice compromise between mag and focal length). It's especially handy when I'm soldering small things, fits over glasses, and allows me to get right up close to the work.

(However, I don't always want to be literally quite so close to the work so I came here looking for info on illuminated ring-type magnifiers as an alternative. Each has its place IMHO.)

I use several different magnifiers.

The magnifier at my work bench is an early Luxo Wave unit with two- PL-style fluorescent lamps (one on each side). I regard that magnifier as one of the best and most productive tools that I have ever purchased. It was horrifically expensive when I purchased it - most of my wages for summer jobs one year went into that unit. They are still expensive today - around US $500 for the current LED version.

I modified my unit slightly by adding a cheap jeweler's loupe to the bottom of the lens on one side such that I get an extra 10X or so magnification in that particular area.

Our main magnifier / microscope for SMD work is a Vision Engineering TS-4. This uses a 250 Watt Halogen lamp feeding a fibre-optic illumination ring that surrounds the bottom lens. Magnification range is 6X - 40X and the microscope is a joy to use. The image is projected onto a screen - you aren't hunched over a standard microscope and you can work at the microscope for hours without getting either a strained neck or strained eyes.

I have another magnifier that isn't really intended to be used as a magnifier but it, also, works well. This is an old electronic microfiche reader that uses a gorgeous lens assembly driving a 1/2" B&W Vidicon which in turn feeds a 12" B&W monitor.

It works extremely well but the image is only B&W. I eventually plan to replace the electronics with something modern but I'm waiting for it to die - and it just won't!

We also have a plethora of much less expensive magnifiers scattered around - there are a couple of original Luxo round magnifiers with the circline fluorescent lamp as well several of the knock-off imports that mimic the Luxo units. These all work well but are not anywhere near as nice as the Luxo Wave.

We have tried using the inexpensive USB microscopes available today but the image lag, although tiny, is extremely annoying. I keep one in my laptop case for use in the field but I really don't like using it much.

Not the answer you're looking for? Browse other questions tagged tools surface-mount workbench light or ask your own question.

43
What tools, equipment, and techniques do you use to solder fine-pitch SMT parts?

8
What is a general set of components for a robotics hacker?
17
What is the best way to short adjacent SMD pads?
6
What type of method for producing White-Light LEDs is the most common?
4
What is the best tool to hold small printed circuit board?
0
What is the type of this surface mount transistor?
1
Which type of surface finish to use for low-temperature SMD soldering?