I have that power amplifier schematic. 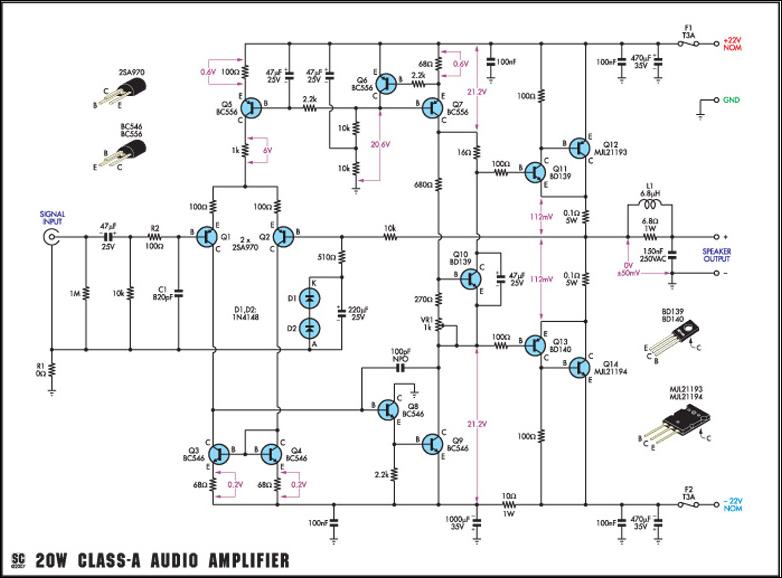 1) Class A simply means that even under maximum signal conditions, the output transistors (here Q12 and Q14) should always have some collector current flowing through them.

So is it simply a matter of biasing (choosing the operating point) of the output stage such that this (Ic > 0) is always true. You can do that by making the quiescent current large and/or limiting the maximum power.

So I could also for example say that this same design is a 40 W class AB Audio amplifier (I'm for argument's sake assuming it can do 40 W in class AB) which works in class A up to 20 W.

2) The collector of Q8 just needs to be connected to a supply rail. If it was connected to the +22 V rail then Q8 would need to dissipate a lot more power. Since the emitter of Q8 is at about -21.3 V (-22 V + 0.7 V) there is plenty of "headroom" for Q8 to have 0 V (ground) at the collector. So there's nothing special about the connection to ground, it is used as a supply rail.

Yes Q8 and Q9 indeed form a darlington pair. This limits the load on the current output formed by Q1 and Q3. If Q8 was removed the gain in the amplifier would drop significantly.

3) The "zener" made by Q10 sets the quiescent current in the output stage. So as mentioned under 1) you can then choose the range in which the amplifier works in class A. In creasing the voltage means a higher quiescent current and also a higher power dissipation!

The overall distortion of this amplifier is not only determined by how much voltage you set across Q10. This amplifier also has feedback, not the 510 ohm and 10 kohm resistors connected to the base of Q2. This feedback network (10 kohm + 510 ohm + 220 uF capacitor, ignore the diodes, they are for protection only) sets the gain of the amplifier and this also reduces distortion.

So the overall distortion is determined by both the feedback and how you set the quiescent current of the output stage.

Not the answer you're looking for? Browse other questions tagged power amplifier multisim or ask your own question.