What could be causing this sine on 7810 output when powering BLDC fan?

When the fan is connected to the regulator, on the output I get this wave: 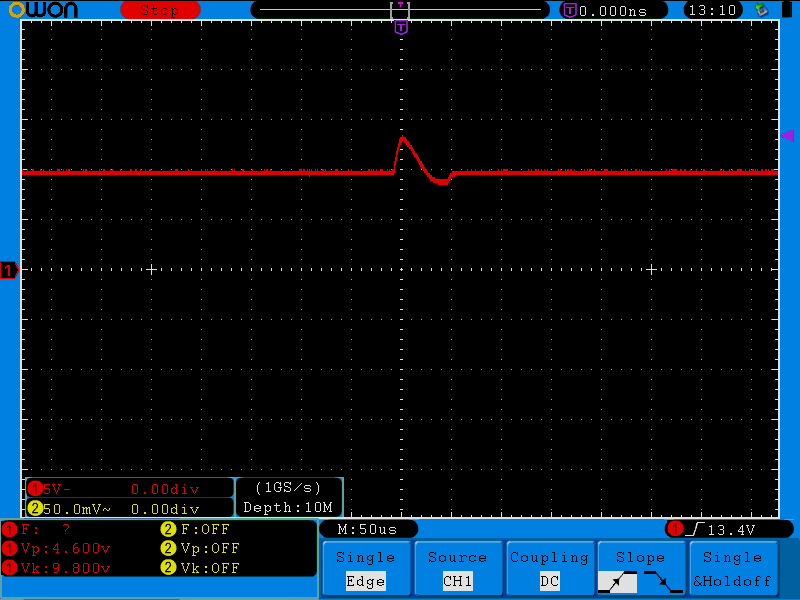 When I zoom out in time, I get something that looks like this: 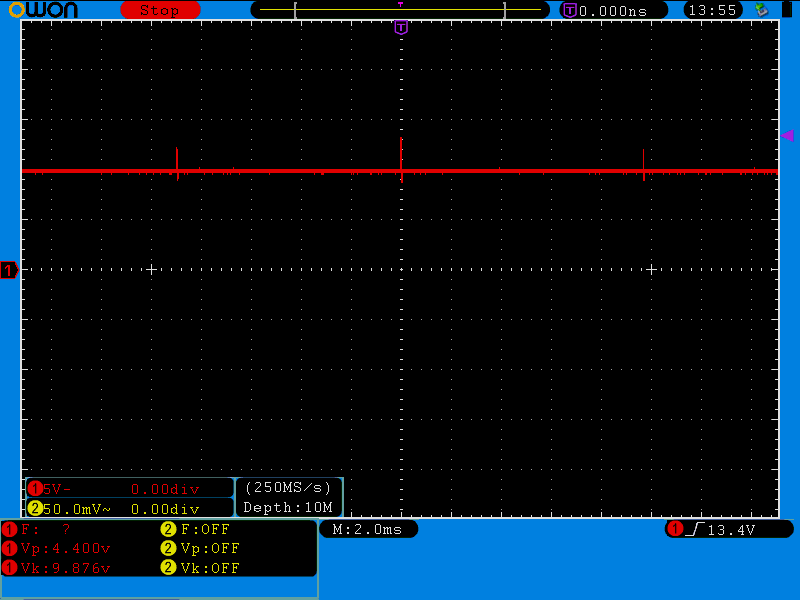 For those who can't be bothered to click on the image, the distance between the peaks is almost 10 ms.

When I zoom out a bit more, I can see that there is another wave here riding on top of those peaks like this: 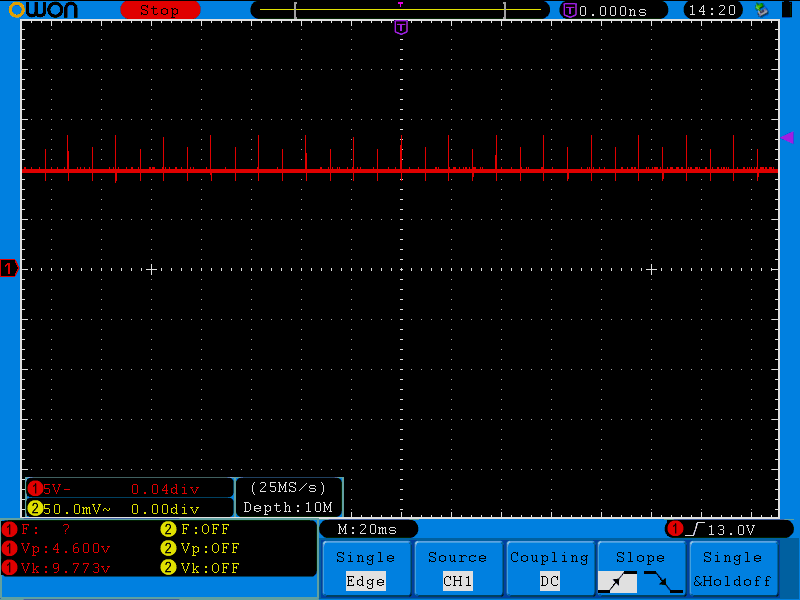 So any ideas what could be causing this?

Here's the input waveform with the output peaks: 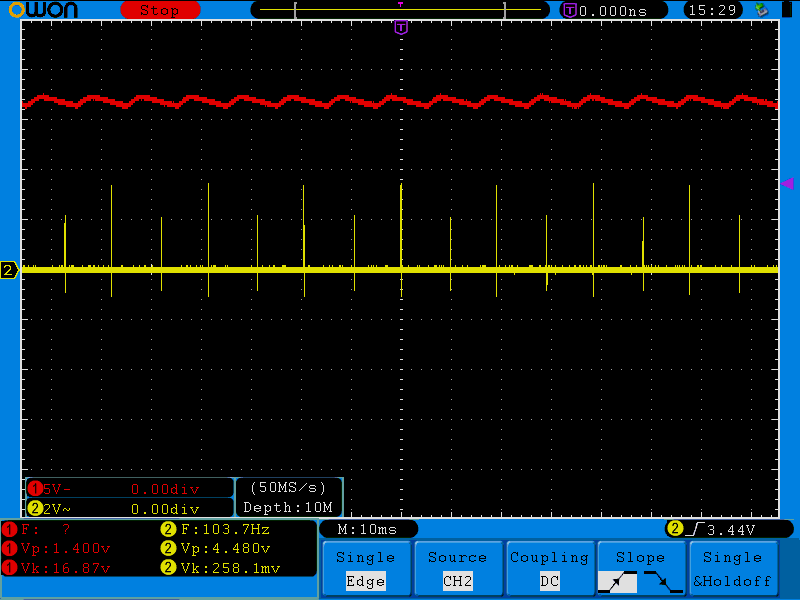 The input peaks are 10 ms apart and are in phase with AC line transitions, as expected since the AC frequency here is 50 Hz. The input is coming from a diode bridge rectifier. The input voltage is a bit high since I changed the original 1N4007 diodes with STPS2H100 Schottky diodes because I initially believed that one of the input diodes developed a short.

I can't determine the exact relationship between the input and output wave. When I trigger by one of the waves, the other is flowing from left to right on the screen.

This all looks perfectly normal and should be expected. Look up the load transient response spec for the regulator. As the motor is commutating, the load it presents to a constant voltage changes suddenly. The regulator can't change its output current quite that suddenly, so for a short time the voltage is out of regulation. Then the regulator catches up and the output voltage goes back to being nicely regulated. Again, this is all to be expected.

If you are just driving a motor, there is no problem here except perhaps for using a linear regulator to supply the motor voltage in the first place. That is going to waste a lot of power as heat in the regulator. Wasting the power may not be a big deal, but dealing with the heat often is.

The only problem is if you are trying to use this 10 V for something else where that ripple matters. The first way to attack that is to use a larger output cap on the regulator. 100 nF is very small, especially for something with high current transients. Nowadays there is no point using something that small. My minimum would be 1 µF unless the regulator would not be stable with that (in which case using a different regulator is probably a good solution). Just because this regulator is specified to be stable with 100 nF minimum, it doesn't mean that's a good idea.

A better solution all around might be to drive the motor from the higher input voltage and use PWM to make the apparent average motor voltage what you want. Beyond a few 100 Hz, the motor won't know the difference. Some motors make audible whine at the PWM frequency, so often 25-30 kHz is used since it is just above the human hearing range.

About your update. The two signals are totally unrelated. It just happens that the fan's noise seems to repeat at about 100 Hz, so giving about 1 pulse per half mains period. That they're unrelated can be seen from the fact that triggering on one signal, the other one won't remain in sync. The speed at which the second signal moves across the screen is determined by the frequency difference between both signals. It should be obvious that the fan's noise can't be in sync with the mains, since it's powered by a DC power supply which ideally has removed all reference to the 100 Hz at its input.

As several people have noted, some types of ceramic material exhibit piezoelectric effects which cause both audible responses and voltage spikes.

Assurances that all is well in the garden will be true in many cases, but not all.
A ceramic capacitor that is excited by a sharp edge / rapid transition can produce voltage spikes which are high enough amplitude to destroy nearby circuitry. A "filter" capacitor mounted near an LDO regulator is in an ideal position to be damaged by this effect due to short connection distances.
Some modern LDO's have very limited Vinmax ratings - perhaps 6V max for a 3V3 LDO). Real world destruction has been observed in such cases.

Here is an extremely good tutorial on the characteristics of ceramic capacitors , the differences between the 4 EIA classes and the tradeoffs involved. Note that very high capacitance ceramic caps, which are most likely to be used in power supply input applications, are the types most liable to cause problems due to piezoelectric induced spikes.

Not the answer you're looking for? Browse other questions tagged voltage-regulator noise or ask your own question.

7
Why do the inputs of this CC circuit op-amp need clamping?
36
Identifying Source of Periodic Artifact at Op-Amp Output
0
A question about interpreting and reducing high frequency noise in a low level square wave
4
Controlling max voltage (power supply) when Vin varies?
0
How to limit current for voltage regulator/decrease power dissipation?
0
What can be said about the nature of the noise by looking at this spectrum?
0
What could be causing this interference and how to eliminate it?
3
Voltage Regulator Design Not Working