Is it technically possible to divert a lightning into a moving vehicle as in "Back to the Future" movie?

In "Back to the Future" movie the characters try to power the time machine installed into a car by diverting a lighting.

They know that a lightning should strike the clock installed on a specific building at a specific moment of time. For the time travel to happen they need a huge jolt of energy and the car moving at 88 miles per hour. So they attach a thick wire (looks like a thick steel cable) to the clock and position that wire above the road at the height slightly greater than the height of the car, install a conductive rod onto the car and somehow connect that rod to the time machine.

They drive the car to the wire so that the lightning strikes exactly at the same moment when the rod on the car touches the wire and so the lightning energy goes into the rod and into the time machine in the car.

I always wondered whether this is practically possible (time travel aside of course).

I expect the following two problems:

The first problem can be solved by using a computer to drive the car. The second problem can perhaps be solved by insulating the wire everywhere except above the road. Neither seems to have been done in the movie.

Are there any other problems in that electrical setup? Can it technically work?

Yes it surely is. People divert lightning all the time using fine wires dragged up into the sky, as user30997 suggested. 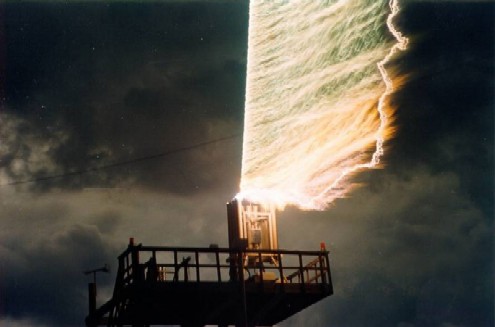 The Doc already knew approximately when the tower was going to be hit, so all he had to do was to give the lightning a nice length of wire to follow.

The mistake they made though was trying to get the car to touch the wire at the exact moment the lightning struck. As you pointed out, they'd have to get the timing superhumanly accurate.

What they should have done was have a spool of fine wire in the car, paying it out as they drove away from the clock tower. That way they'd only have to make sure that the car was travelling at 88mph when the lightning struck. This would still have required timing accurate to a few seconds, and I don't know if the clock had a second hand.

Personally, I think he should have just carved out a nice little niche for himself as the inventor of Rock and Roll. 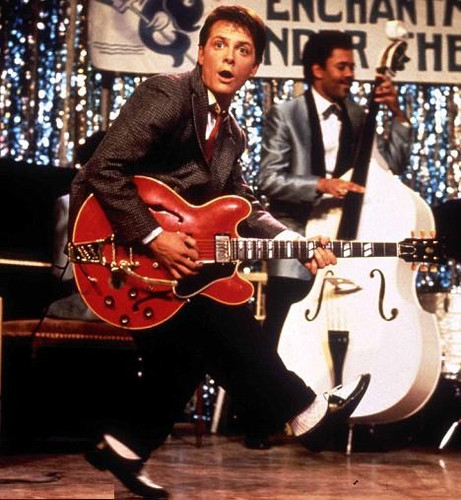 I have frequently considered what it would take to get lightning on-demand, though my application was to create a weird formation you see in sand when it is struck by lightning - called Fulgurite.

The way I've always figured that I'd do it would be to use a couple thousand feet of fine wire on a fast-payout spool, connected to a very good ground at one end. You attach the other end of the spool to a model rocket with a BIG engine and when you have your thunderstorm, you simply launch several thousand feet of wire into the thunderhead.

You'd probably be much better off using a helium baloon, but a rocket is so much cooler.

The wire wouldn't have to be very thick. Any wire is going to conduct better than air, which ionizes and becomes a better conductor in the first microseconds of a lightning strike. I always figured that thin wire is a better conductor than any human that's ever been struck, so it should work - at least as far as getting the strike. But you'd probably be doing this in a dozen thunderstorms before it ever worked. Forget about getting split-second timing.

88 miles per hour is about 130 feet per second. In the movie they had at best - what - about 3 feet of slop? That's +- .01 seconds of error? How were they supposed to know to that degree of accuracy when the clock tower was hit? Was the pendulum fused by the hit at some exact, measurable angle that gave them the time of the strike to within a hundredth of a second... AND they happened to print that information on the brochure? =]

So you think this movie portrayed unrealistic physics? Shocking! Gee, that never happens.

Lightning will take whatever path it can to discharge. It is often said that it takes the path of "least resistance", but it is usually hard to know what that is because there are so many unknowable parameters, like exactly how much charge is built up on surrounding objects, where the air might have just a little lower breakdown voltage due to pressure, humidity, rain content, and other factors, etc. The net result is that general trends are predictable, but specifics usually not. For example, a tall grounded conducting tower is going to get more lightning strikes than a nearby tree, but any one lightnening strike might still hit the tree instead. There have been cases of blue sky lightning where the discharged travelled miles horizontally before hitting a very unlikely-seeming object, passing many seemingly better conduction paths along the way.

However, a cable tied to a high conductor, like the clock in the story, should provide a easy path for lightning. If the cable is uninsulated, then I'd expect the current to arc between it and the ground in several point. A car driving over the end of the cable shouldn't be all that effected since the current wants to go into the ground. If the top of the car were electrically well connected to the ground somehow, then maybe current would go thru the car, but it doesn't make much sense that lighting current would jump from a cable already lying on the ground to the car frame which doesn't provide a better path to ground than the cable already has on its own.

Like I said though, with good quality flux capacitors lots of things are possible.

Not the answer you're looking for? Browse other questions tagged power-supply power high-voltage or ask your own question.

7
How is inductive wireless charging of a moving vehicle on a public road possible in efficient way?
5
How large would be the transformer for converting a lightning into useful electricity?
5
Why does this insulator separate two conductors with equal voltages?
1
Intel Atom board (DN2800MT) power supply, can I add battery?
0
Car stereo wired to computer power supply with backup battery to keep memory
2
Homebrew Redundant PC Power Supplies
0
Increase emf received from a coil without changing flux source
1
How do I connect this crane machine motherboard to my power supply? What connectors do I need for the power supply header pins?
0
Generate a higher-than-power-supply voltage with capacitors