As part of furthering my understanding of opamps and audio electronics, I put this headphone amplifier together on a breadboard. Only one channel shown: 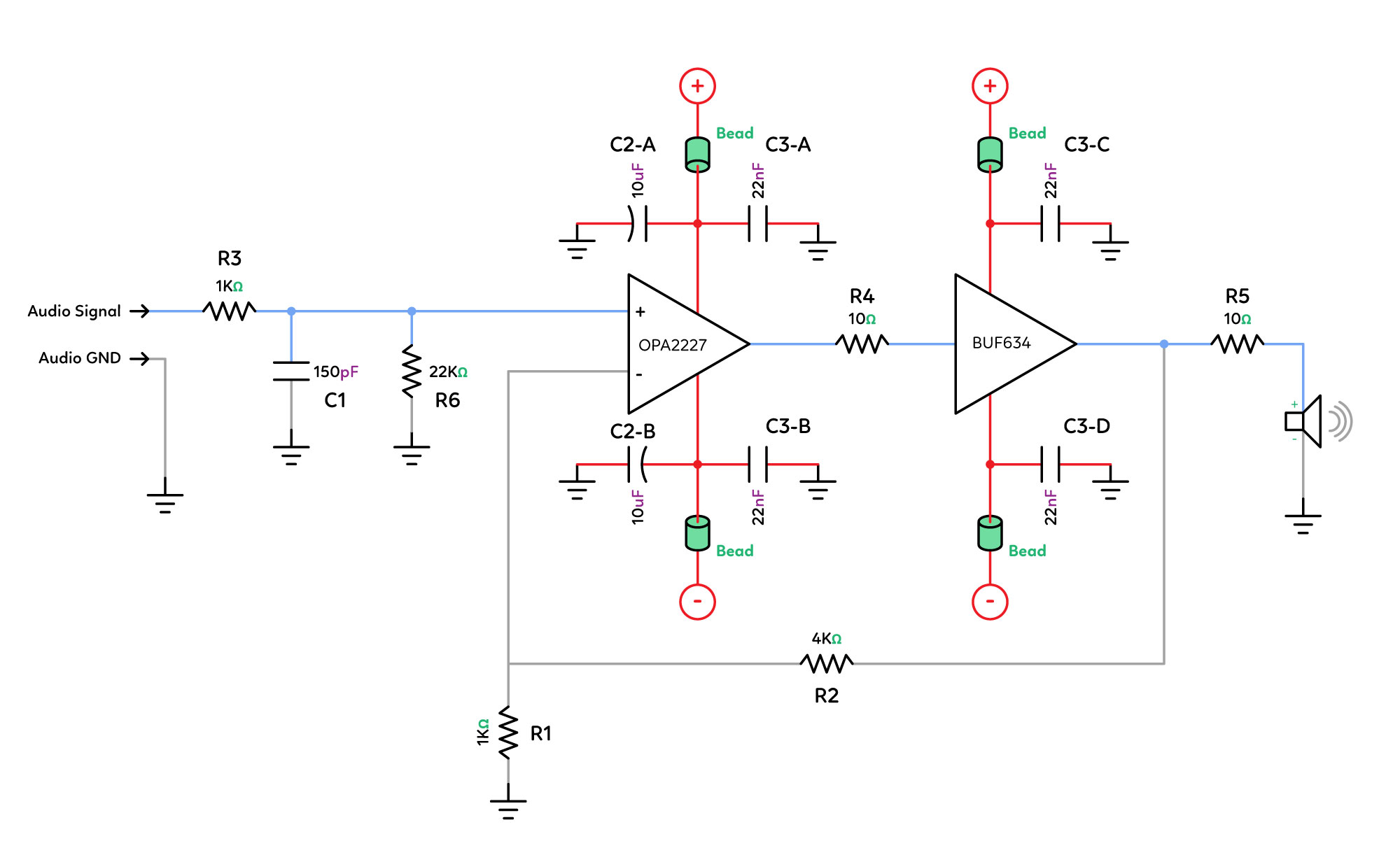 The circuit works like a charm, and is based on a number of schematics I scrounged on the web (swapping alternative parts in and out with whatever I had in my junk drawer).

I'd like some help to identify the purpose of some of the passive components, how their values are chosen and why they're necessary. The parts I understand (although correct me if I'm wrong!):

R3/C1 make a low pass filter which will remove high frequency interference (like cellphone RF picked up by cables) as this can be rectified and detected by the opamp and create audible noise. C1 should be a low-distortion capacitor, ie ceramic C0G, not X7R and the like. Its value is chosen to cut well above the audio band, here at about 1MHz depending on source impedance.

R6 provides a path for the opamp's input bias current to ground. Since the opamp inputs are BJT transistors they have a base current. Without R6 when nothing is plugged into the input jack, the base current would have nowhere to go, so the input voltage would rise (or fall) and the opamp would clip.

About the buffer: the opamp is a low-noise low-distortion model but it does not have enough output current capability to properly drive headphones (this is the case with most opamps). The buffer is unity-gain and has a much larger current capability. This creates a composite amp. Since feedback is wrapped around the buffer, the opamp will control it and correct the distortions introduced by the buffer. The buffer must be very fast (and layout tight) since it is placed inside the feedback loop, you want to avoid adding extra phase shift which would make the whole amp unstable (check on control theory and Nyquist stability criterion for details).

A composite amp is a pretty common design, sometimes the buffer will be implemented with discrete transistors.

R5 is a bit tricky. Normally you would not want a resistor here, as adding impedance in the output will make the frequency response depend on the impedance of the headphones, which varies with frequency. Si depending on the value of R5 it will sound a bit different. However, headphone jacks are stupid: when you plug them in, every pin shorts to pretty much everything else while the jack slides in. Thus the resistor provides protection against this short-circuit. However the buffer datasheet specifies : "Output short-circuit (to ground) Continuous" which means it is protected (it will heat up, though).

The resistor has another use: it isolates the amp from the cable's capacitance. Driving capacitive loads introduces phase shift in the loop and risks instability. So adding a resistor works well to avoid this.

About the decoupling caps:

It would be much better to replace the 22nF caps with the largest value you can get in X7R dielectric for your favorite SMD package, say 1206. More capacitance is better here. 22nF is not enough for a high current chip like BUF634, especially with the added impedance due to the beads.

A smaller cap (physically smaller) would have lower inductance but this doesn't matter here, as the inductance difference between a big 1206 and a tiny cap is swamped by the IC's pin inductance anyway.

Likewise, the ferrite beads are of dubious interest... In the way the circuit is wired, they would introduce a LC resonance with the 22nF caps on the buffer, and this could lead to ringing in the output and other nasties. If you absolutely want to have ferrites in your power lines, get the spice models from Murata website (they're a free download) and sim it to avoid any ringing.

If you use a noisy power supply, the place to filter it is at the connector where it enters the board, not inside the circuit where the opamps are.

If you want to make this thing short-circuit safe, mind the dissipation in the buffers, and also in R5, in a shorted output scenario. Don't use a 0805 SMD resistor for R5, it will just burn. The buffers may require a small heat sink.

As for the resistor choice, if you pay for a low-noise opamp, you may as well use low noise resistors (ie, metal film or thin film in SMD) and avoid carbon, thick film, etc which produce current-dependent noise. They only cost a couple cents extra.

Not the answer you're looking for? Browse other questions tagged operational-amplifier circuit-analysis audio components schematics or ask your own question.

7
How do I protect analog circuit from relay switching noise?
3
Advice to improve my microphone circuit
2
How do I change the output volume of this audio amplifier circuit?
0
headphone input to arduino for FFT usage
0
How do parallel resistors and capacitors reduces frequency peaking in opamps?
0
Active band pass filter + offset
0
Understanding purpose of a resistor in reference schematic TIDU034
0
Audio amplifier components