How does a DC clamp meter measure current? 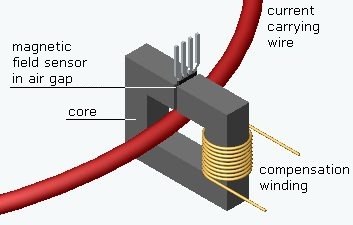 This is one way of doing it. Ref

A normal transformer can't deal with DC currents. Therefore the operating principle of DC current probes is rather different from AC probes. Here also is the current carrying conductor the primary winding and is inserted through the core opening. There is also a secondary winding, but now it functions as a compensation coil. The core is provided with an air gap that holds a sensor, e.g. a hall-sensor, which measures the magnetic flux in the core.

The current in the primary wire will magnetize the core. This magnetic field is measured with the sensor and as a result of this, the control circuit runs a current through the compensation winding in a way that the magnetic flux in the core is kept zero. As a result of this the core will never be magnetized. The advantage is that the non-linear properties and hysteresis of both the core and the magnetic sensor have little influence on the measurement results.

Beside the described measurement circuit there is also demagnetization circuit. Before using the current probe the core must be degaussed without wires inserted in the core.

Gain can be increased with compensation turns ratio at the expense of bandwidth.

True RMS RF power meters work something like above, except instead of magnetic loop matching, they use a thermal resistor and using a bridge to compare RF heat with a DC heater for accurate measurements and obviously much lower bandwidth from thermal time constant, but very accurate.

Static magnetic fields can be measured with an Hall effect sensor.

If an AC clamp is put around a wire with DC current, a DC pulse occurs at the output of the winding of the clamp. Feeding that pulse to an integrator gives the current because the pulse voltage is equal with the flux growth velocity through the winding and the final flux is proportional to the current.

8
Why is a clamp meter unaffected by nearby wires?
0
Is it possible to tap a wire without breaking it?

1
What's the dual of Faraday's law of induction?
0
Question about magnetic field induction and AC generator
0
Does electric field generated by changing magnetic flux generate an opposing magnetic field?
0
Mutual Induction in Transformer
0
Can I use rectified AC current to heat an object inside a induction coil?
1
A question about Faraday’s law of induction for a closed path
1
Multi-Conductor DC Clamp Meter
3
How does this RPM sensor work? – Induction in an open circut
7
Can two voltmeters connected to the same terminals show different values? Circuit with induced EMF
1
What're the differences between eddy current, current generated in electric power generator and inductive crosstalk generated between adjacent lines?