I have built a circuit, which consists of a 9V AC transformer, feeding a bridge rectifier and the current to the load (a length of resistance wire ~3Ω) controlled by a MOSFET. The gate of the MOSFET receives a PWM signal from an Arduino control module which allows the duty cycle to be varied from 0% - 100%.

NOTE The MOSFET is intended to chop the full wave rectified AC voltage.

The circuit works, and has been in use for a year.

I decided to add a circuit, consisting of a diode and filter capacitor to derive a DC power for the Arduino, but several electrolytics went up in smoke, and the output voltage considerably exceeded the 13V I was expecting (so it ended up being removed).

I recently bought a BitScope and was using this to circuit.

When at 0% to voltage is the expected full wave rectified DC.

As the duty cycle of the PWM control increased there appeared voltage spikes on the rectified DC, and also on the input AC. 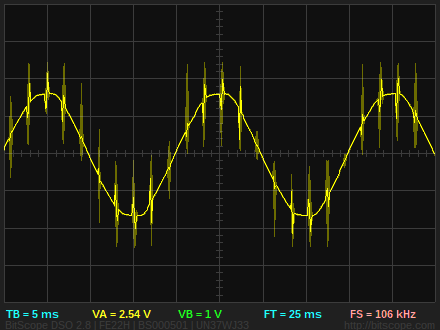 It appears that when the MOSFET turns off the falling current generates a spike. As there is no other component with any inductance, this seems to be coming from the transformer itself. This was unexpected, as I am working well below the current rating of the transformer, at a much higher frequency than it would normally run. I modified the control circuit to produce 4kHz PWM, which reduced the amplitude of the spikes, but they are still of concern.

I had expected some ripple, but not the massive spikes, which I am concerned may exceed the 60V rating of the MOSFET.

My question is, can anyone suggest some way of suppressing these. None of the normal techniques for suppressing inductive pulses from the load seem applicable.

First Note: You're talking about pure DC but I cannot see any high-value electrolytic capacitor (except 100n) for filtering after the bridge. I assume that you've forgotten to add that to the schematic in the question.

It's pretty normal to see spikes because there's switching. But please note that measurement technique is also important. Because when you use the ground clip of the probe, it acts as an antenna. This leads to some unwanted measurement artifacts. So, please make your measurement like shown below: 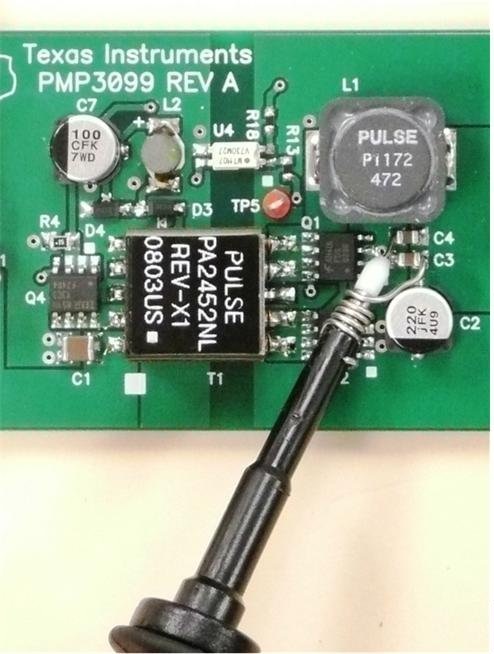 Note that even if the circuit does not contain any inductances, there can be seen some spikes/ringings caused by:

So, check these first.

As for suppressing, you can put a pi filter between supply and the load. And also you can place a RC snubber across D-S terminals to suppress the spikes right at the switching node.

All of your problems can be explained by a simple application of Ohm's Law.

For low loss the caps need to be at least 2x the transformer voltage and have a dissipation factor of <<1%.

Not the answer you're looking for? Browse other questions tagged power-supply pwm or ask your own question.