If I am correct, a typical loudspeaker's impedance will change depending on frequency. The impedance will be comprised of the resistance and the reactance of the voice coil. As frequency increases, so will inductive reactance.

Mechanically, the loudspeaker coil and cone have mass, and are supported by at least one spring, the cone suspension, and often another spring in the case of a closed box, which is the compliance of the air in the box. This mass/spring pair has a resonance, usually down in the high 10s or low 100s of Hz. In a ported box, the mass of the air in the port forms another order to the resonant system, this is usually done to push the resonant frequency down.

The air has an impedance (it is medium through which waves propagate), though the cone is usually poorly coupled to this, especially at low frequencies, which is why speakers tend to be so inefficient.

There will be some capacitance across the loudspeaker coil. I suspect the electrical resonance with the speaker inductance is well above audio, and well damped by the resistance.

So it's a bit more than just the inductance and resistance.

Most speakers have a low Q factor or in other words L/R ~ 2 for the series R= DCR.

But when energized with AC, the moving cone presents a shunt resistance from air. Since current is proportional to acceleration which controls force of cone and resulting air pressure, the shunt air load is fairly constant but not flat due to structural effects.

The inductance is shunted by the air impedance which dominates the speaker impedance in series with the DCR of the coil, so an 8 ohm speaker has a DCR of about 4 ohms and a dynamic load of 4 ohms over the compliant audio range, ignoring resonances.

The impedance of a loudspeaker is rather complicated.

It is basically an inductor, so you will have L and R due to the resistance of the voice coil. R can rise quite a bit with voice coil temperature.

However this inductor is part of a motor, which is connected to a mass (the whole moving mass, coil, former, cone, etc) which is then connected to the armature by two springs (the spider and the surround). The air inside the box is also a spring, and the pressure it exerts on the cone adds to the force of the spider spring.

Since you have a mass and a spring, you have a resonant mechanical system, and the movement of the voice coil will induce a voltage back into the input. Thus we have an impedance curve like this, usually:

You should read the source of this image, it is interesting.

The large peak corresponds to the mass/spring system resonance. Note this is with the speaker mounted in a box. The frequency of the peak, will change depending on box volume, since this influences the strength of the "air spring" behind the cone. Box stuffing will also change the Q of this peak a bit.

The rise at high frequency is L.

And the two small peaks are reflections of the waveform from the back of the cone on parts of the speaker basket. The reflected waveform exerts force on the cone and thus induces a voltage in the coil, so it modifies the impedance. 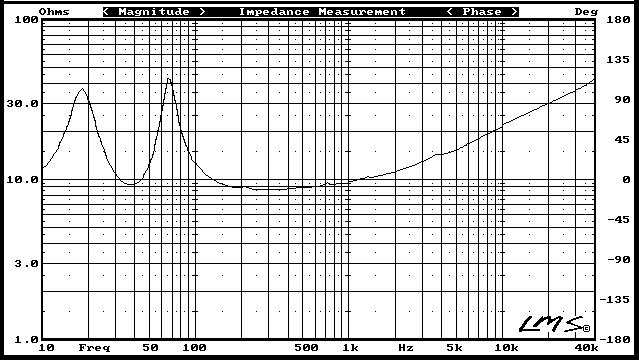 My point is that besides L and R, the whole impedance mostly depends on mechanical parameters, and also on the box, its tuning, its volume, whether it is bass reflex, sealed, or any other design. So knowing the impedance of your speaker outside of its box is only part of the story.

For example, if your speaker was mounted in a horn, then the acoustic wave would go out of the cone, then into the horn, but some of it will reflect at the mouth of the horn back to the speaker. So you get a kind of organ pipe with resonances, and an impedance graph from hell: 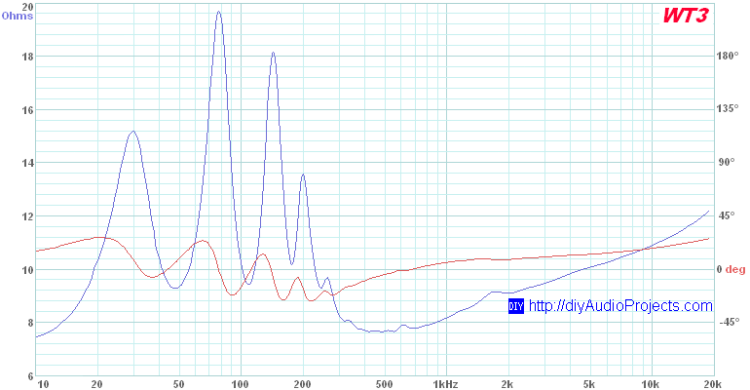 (I wouldn't expect this one to sound good. Having resonances above 100Hz will do really weird things).

Don't forget that most speakers have more than one driver, and a set of passive crossover and matching components for splitting between frequencies AND stabilizing things electrically for max power transfer.

Part of the design is to mitigate the peaks in the physical/electromechanical systems of the drivers themselves to maintain frequency flatness and more muted impedance variations for the benefit of the amplifier.

7
Does a voice coil vibrate at the same frequency as the source sound file?

49
How can PCB trace have 50 ohm impedance regardless of length and signal frequency?
3
How can I describe mathematically what is happening in my home made LVDT variant?
0
What effect does Permanent Magnet have on an air-core coil?
0
How do I use series and parallel combinations of inductors and resistors to achieve a certain resistance+inductance?
1
Why does an induction motor draw more current when the load is increased?
1
Does reactance increase noise?
1
Inductive Charging 2 layer coil transfer to 1 layer receiver. Any issues?
12
What really causes series inductance of capacitors?
0
How to know what this impedance is?