How to design a combinational circuit that finds the minimum among multiple given numbers?

There are quite a few articles (for example, this) that can be found online discussing the design of a comparator that takes two numbers (say, A and B) as inputs, and outputs whether A > B, A < B or A = B. But what if I want to compare multiple numbers?

Let's say we have four 4-bit binary numbers denoted as i0, i1, i2 and i3. I want the output of the circuit to be the index of the minimum value among them. Below are some examples:

The highlighted value in each row represents the minimum value among the four which the output should correspond to.

I've thought of comparing the bits one-by-one starting from the MSB, but things got ugly when I tried to realize using combinational gates. Is there any efficient ways to do this?

An approach that is fairly easy to explain is the following idea:

I'm not saying this is the most efficient method. Only that it is the more obvious and more easily followed method: 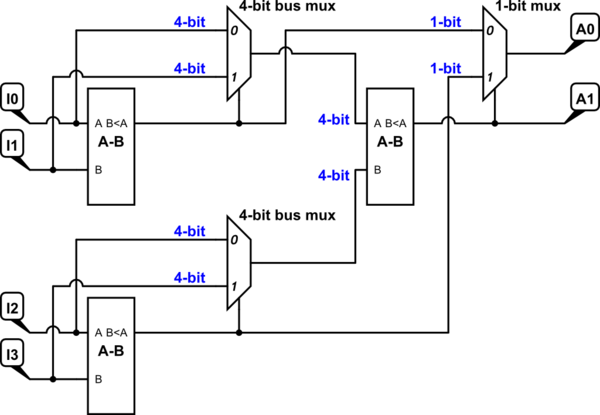 I'm sure you can work out the logic for the indicated special function in step (1) above. It's not terribly complicated. The rest is just standard mux logic, which is found almost anywhere you want to look.

This may be a benchmark design. I'll leave the problem of making it still more efficient up to you.

Start with the first bit; if any bits in that column are cleared, exclude the input that has it set from further processing, e.g. by OR'ing it with 1111.

Then repeat the circuit for the second bit, and so on.

AND together whatever is left.

if you want a simple way. run the inputs into demultiplexers to convert the 4 bits into 1 of 16 signals. OR those together across inputs and then feed the result to a priority decoder.

Not the answer you're looking for? Browse other questions tagged digital-logic comparator digital-comparator or ask your own question.

0
Combinational circuit to check if two four bit numbers are equal
0
How does design compiler constrain combinational paths?
0
How do I design a cascade network of 1-bit comparators to determine if two n-bit numbers are equal?
2
CMOS circuit design: How to implement an interrupt circuit that detects minimum or maximum peak?
0
Designing a 4-bit Adder-Subtractor Circuit
0
How to multiplex one clock among multiple selectable outputs?
2
Designing a combinational circuit that converts a 5 bit binary into its 2's complement
1
Dual Comparators connection that affect the design
1
Given 4 inputs (A,B,C,D) how can I design a circuit that counts the number of 1s?