Circuit with 10 LEDs with 9V battery

I know that a 9V battery can only power so many LEDs. I need a 9V battery to power 10 of them maybe less or a few more and keep brightness and im not sure where to go to make it happen.

Or if i need a capacitor or an amplifier in the circuit to make all of them work and be bright or what size of either i need or if i should then add a resistor to it or so on.

So far i have a 9v battery connected to a switch then LEDs (x10), i think i need 32V to power the whole circuit but not sure how to achieve this.

Well, the first question is, do you really need 10?

I actually did something similar to this to make a little flashlight circuit recently, using a 9v battery and a matrix of nine 3v 30mA LEDs connecting like so: 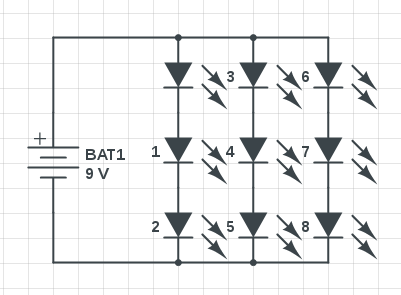 So in circuit 1, we see that we have 3 strips of 3 LEDs, for a total of nine. Each strip is connected in parallel, so the voltage across each strip is the same as the battery (9 volts). The current is triple what we'd have for a single strip of LEDs, but is still tiny, and well within what the battery can supply (~90 mA).

LEDs that function best at 3.2 volts can probably function at 3 volts, so this circuit should achieve close to maximum brightness with no power wasted on resistors.

Edit: It's notable that this design might have cascading failures over a number of possible things. If any one LED fails open circuit, one string will fail, and the current across the other 2 strings will increase. Conversely, if it fails closed circuit, it will put more voltage across the other two in the LED string, also potentially causing a cascading failure. This is all useful information, but this seems like an entirely acceptable product design as long as you consider what it means for the LEDs to fail. Your circuit should be prepared for the possibility that the entire cluster of LEDs becomes a dead short, and shouldn't catch anything on fire (fuses, anyone?).

Furthermore, if longevity and reliability is your priority, you might be better off using Transistor's schematic, baring in mind that you will waste a rather significant percentage of battery power. Or better yet, use a buck converter module. But all of these options, it seems to me, are out of the scope of OP's goal -- which was decidedly not to make a final product design for a company that needs to be UL listed.

If you need 10, this design doesn't work of course. One option is to do something like this:

Which one person already suggested. This would work, but generally speaking, the less voltage you have to drop across a resistor, the better. I'd recommend something more like this: 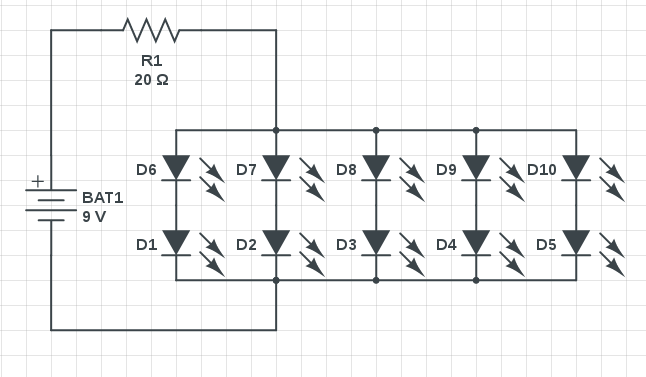 As you can see, we are dropping 6 volts across the LEDs, and are left with only an extra 3 to drop across the resistor. We know each LED takes 30 mA, so the total for each string of LEDs is also 30 mA (0.03 amps), since series of components have the same amps. Each string is connected in parallel, and we have 5 strings, so the expected total for the LED matrix is .15 mA. We can calculate the value of resistor to use, with ohm's law, like so:

Edit: I did a bit more calculating, and the resistor from this diagram, that I suggested you use dissipating .45 watts (0.15 * 3 = .45). Thus, I suggest you use at least a 1 watt resistor. There are also ways to use multiple smaller resistors as one larger one, to spread the heat out.

Edit 2: As Transistor pointed out in their answer, you can also split the resistor up into multiple resistors for each. The efficiency of this is exactly the same (about half a watt dissipated by the resistors in total), but it is actually considered somewhat better practice to split your heat across your circuit, rather than just using a bigger resistor. I mainly try to go for minimum component count in my designs, but you might be better going with Transistor's design if you want better longevity.

Addendum: as one person pointed out, Transistor's circuit also is more reliable if there are wildly varying electrical characteristics of the LEDs -- if one string pulls more current, the other ones will be affected, with my single-resistor circuit. So if you're going to use a resistor-mediated circuit, theirs is probably objectively best (in terms of reliability).

To ensure full current over a reasonable range of battery voltages - 9.5 V down to 8 V - you can only have two LEDs in series on a 9 V supply. These will drop about 3.4 V each and 6.8 V in total. A series resistor will drop the remaining 2.2 V to make up the 9 V battery voltage.

The total current draw will be 100 mA so a PP3 type battery will not last long.

Connecting LEDs in parallel without balancing resistors is usually a bad idea. The one with the lowest \$ V_f \$, forward voltage drop, will hog more of the current than the others and glow brighter than the rest. 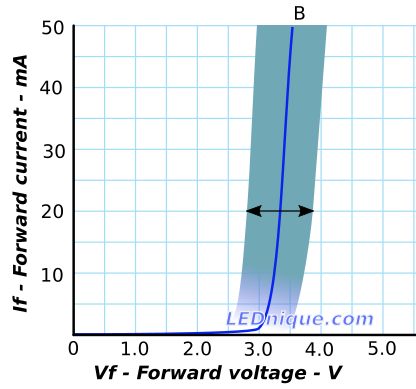 Figure 2. The Lite-On LTST-C170TBKT-Vf-variation, for example, is rather wide. Source: LEDnique.com.

There can be a surprising variation between LEDs. The linked article above explains some of this and the manufacturers' method of "binning" whereby LEDs of similar \$ V_f \$ or luminous intensity are graded sorted into separate bins and can be purchased in matched lots.

Since you should not hook up more than two at a time in series to the battery, that means your efficiency is only about 66%. For this application you really should use one of the many switch mode LED current driver modules or devices that are readily available.

That way you can hook up all 10 of your LEDs in series and get the most out of your battery.

BTW: If your 9V battery is your typical transistor radio battery, do not expect it to last long.

Not the answer you're looking for? Browse other questions tagged led low-power series low-voltage or ask your own question.

0
How to solve for current given resistor value for LED circuit?

1
IR Led Strobe - Arduino
1
Connecting LEDs to a 9V battery
6
Why are red LEDs so dim & how do I make them brighter?
22
Why do these LEDs have different brightnesses
2
Will a USB port be able to power a series of LEDs?
5
How many LEDs can you chain in series?
0
High power LED vs. standard LED
1
10m 3.4 volt leds
1
Determining LED safety compliance
0
LED viewing angle for POV display