How can we measure the voltage at the coil of a Slayer Exciter?

How can we measure the voltage at the coil of a Slayer Exciter?

We have built a simple 9V Slayer Exciter for a school project. We are examining the conservation of energy at the transformer. The Slayer Exciter works fine: when held in front of it, a TL-light gives light. We use a BD-139 transistor. But we haven’t succeeded at measuring the voltage of the coils.

We have built the Slayer Exciter through the following scheme: 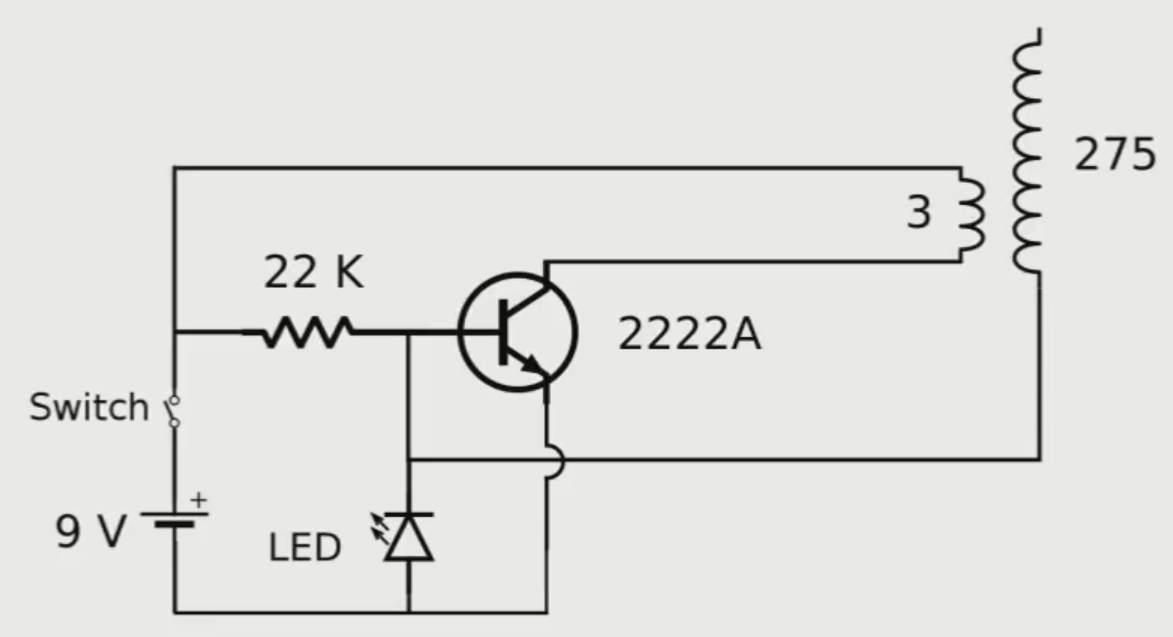 EDIT: The divider circuit should meet at least two criteria: 1.It should attenuate input signal by factor of about 100 (because the transformer have about 1:100 turn ratio). 2. It should have at least 100 MOhm input resistance (to minmize it's influence on secondary voltage level). Divider, consisting of 100 MOhm and 1 MOhm resistors meets both criteria. Ideal oscilloscope has input with infinite impedance, so when you connect it to the divider where will be no influence. But typical real oscilloscope has input, which equivalent circuit presented on the drawing (parallel connection of 1 MOhm and 10 pF, this values probably printed near scope input connector). The input Rosc plays role of second divider resistor and you needn't add another one. Oscilloscope input IS the second resistor of divider. If you want to get 1:1000 attenuation you may either use 1 GOhm at divider 'high side' and continue to use scope input as 1 MOhm at 'low side', or continue to use 100 MOhm at 'high side' with 100 kOhm at 'low side'. In the last case you neet to place 100 kOhm 'low' resistor in parallel to oscilloscope input.

The circuit generates at about 2 MHz frequency. It's quite high, so there is the need to take into account electro-magnetic radiation and reception. Main rule: keep area of any loop with high frequency current as small as possible. Magnetic field radiation is proportional to that area. The same is true for oscilloscope connection circuit. It have to be shielded (to be protected from electric-field) and must have as low loop area as possible. For your setup at least two points must be fixed: 1. Use coaxial cable to connect oscilloscope to the circuit. Two separated wires (black and red, with that huge distance between them) – is inappropriate oscilloscope connection method. To test amplitude of signal induced directly on oscilloscope/cable, measure signal at both disconnected cable input (as you do on second picture) and short-connected cable input. This amplitude must be as small as possible. 2. Reduce area of primary coil loop. Twist first winding wires on all their path from coil to breadboard. Use decoupling capacitor (parallel ceramic C2+ electrolytic C3) to bypass HF current near T1. Try to keep wire lengths from these caps as small as possible.

Some other ideas: 1. Try to insert ferrite rod into the coil. This will increase coupling between windings and reduce both working frequency and magnetic field radiation. Try to increase first winding turn amount (for example to 10...30). 2. Try to measure voltage across first winding, connecting OSC ground to '+power' wire.

It's right decision to solder the circuit! It should be much reliable now.

According to you experiments, I think that electro-magnetic coupling between circuit and probe still exists. To estimate it's value, try two experiments.

Consider each wire in the probe and in the circuit as receiving and transmitting antennas. After these experiments you can get estimation of non-conductive coupling strength, which interfere with conductive coupling while you are trying to measure secondary coil voltage.

To minimize magnetic field radiation, all loops of significant current must have as small area as possible. Te only such loop in the circuit is primary coil loop, which consists of collector-emitter path of Q1 and of battery. The function of capacitors is to exclude battery from this loop. High frequency (HF) current will flow through the capacitors, not through battery. To further reduce area of HF loop, twist the ends of primary coil (red wires) on their path to Q1. Place them and C2, C3, Q1 as close to each other, as possible. You can measure radiation level using closed loop of oscilloscope cable, as mentioned above.

When you measure secondary voltage, connect GND clip to 'minus' pole of battery to make conductive path of scope's input current. The length of coax cable is not so important (coax configuration is intrinsically immune to radiation). But the length and configuration of non-coax part of cable (red and black wires) is important. So, the best way is to make your own specific coax cable with very short non-coax part (about 1 cm). At least, twist non-coax part of existing cable to maximize it's HF radiation immunity.

The goal is to significantly reduce 'radiation' path of signal, to make possible accurate measurement of signal via conductive path.

Not the answer you're looking for? Browse other questions tagged transformer coil tesla-coil or ask your own question.

10
How to overcome transistor heat in slayer exciter?