Is there a way to estimate the magnitude of the current that would flow through the protective earthing of an electrical equipment in case of a fault?

I recently had an equipment fail in this manner and it tripped a 10 A circuit breaker.

If you know the resistance of the short path from the power panel live back to the grounding point, you simply use Ohm's Law to figure out the current.

How much that resistance is depends on where the short is.

Consider the two examples below. 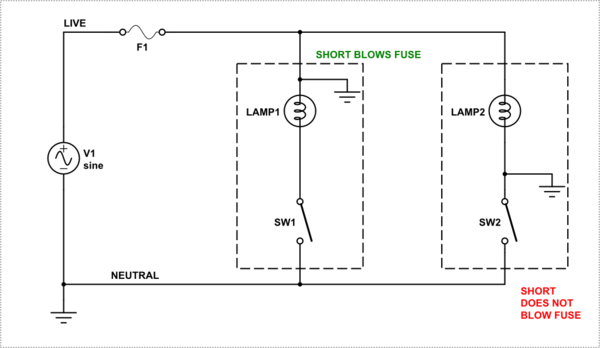 In the left lamp the short is direct from the live line to earth, there is no resistance in the short circuit other than the wiring, and so current will be large.

10A on a direct live line short is actually very small. Hundreds, or even thousands of amps would be typical for a direct short from live to ground till the breaker or fuse goes.

In the right lamp the short is downstream from the lamp, as such the short circuit current will be whatever the lamp would take normally with the switch closed. Note, also in the right circuit, when the switch IS closed, some of the return current flows back through the neutral line and some through the short path to ground.

Notice in the right circuit, when the switch is in either state, the short circuit would NOT trip a classical breaker or blow a fuse since the current is no greater than the regular load. As such, a regular circuit breaker or fuse does not protect individuals from being electrocuted with this kind of short.

This is why modern standards require the use of earth leakage circuit breakers (ELCB), also known as ground fault interrupters (GFI). These devices effectively monitor and compare the current going out the live wire against the current returning via the neutral wire. If there is a difference, current has leaked to earth, (or somewhere else), and the breaker trips and cuts the power. 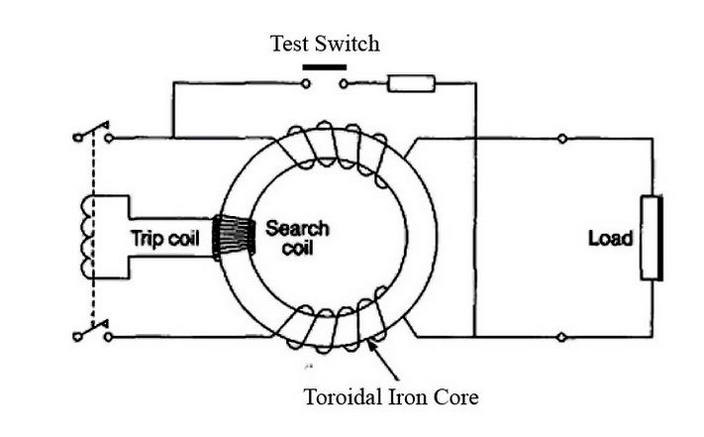 Looking at the typical ELCB circuit above, you can see that the live wire and neutral wire are wrapped round a toroid on their way to the load. When there is no leakage, the coils cancel each other out and no net magnetic field is generated in the toroid. If there is an imbalance in currents a field is generated that creates a current in the search coil that trips the relay.

The current imbalance required to trip these devices is very small in the low milliamps range. However, be aware, that does not mean there can not be a short burst of high current, Amps. If that short path is through you, and your heart, that can still be capable of seriously hurting you.

Sure. V=IR. Measure the resistance from the fault location back to the ground bus in the breaker panel. That resistance is R. V = voltage of fault. I is the current you are trying to calculate. Solve for I and plug in your number. The goal of grounded electrical systems is to keep R very small so that the breaker trips very quickly. It is good that your breaker tripped, not bad. That is the whole idea.

Note: I have glossed over something here that could be important in some circumstances. The voltage available at your utility panel is reasonably constant with normal loads. But if your fault is a short circuit, then the utility voltage will droop quite a bit due to resistance in wires, transformers, etc. If you wanted to accurately predict the current in a fault, you would want to add all that resistance to "R" when you do your calculation. But the current will still be very large, assuming the fault resistance is low.

You can estimate the current by analyzing the fault path like any other circuit. Include the resistance of the live line from the breaker to the equipment and the ground path back to the breaker. To estimate a maximum current assume the live and ground are connected at the equipment. Then any fault current should be equal or less than that depending on where the fault is in the equipment.

You'll need the material and gauge of the lines to look up the resistance per unit length. If you can't get a good length then assume shortest path. In other words estimate path length low. And while you're there check if the breaker is rated to break that much current. (Thanks to Big Clive for that last one.)

Not the answer you're looking for? Browse other questions tagged current protection grounding circuit-breaker or ask your own question.

20
How does earthing work when earth is dry?
2
Why can closing a circuit breaker into a short circuit result in an arc flash?
0
Can current flow to earth in TN-S Earthing system?
0
Protective-Earthing the chassis with the earthing point being the star-point - How does it keep the Chassis at Earth potential?
2
Floating DC power supply (solar panels) - do I need double-pole breakers and why?
1
How does grounding prevent electric shock?
0
Flash in MCCB when switched off
9
Why can an AC circuit breaker not be used in DC circuits?