I'm trying to build a frequency modulated LC oscillator but all circuits I've tried have terrible mains hum after demodultaion.

The oscillator is tuned by capacitive sensor but I'm using a fixed capacitor instead until I solve this problem. I've tried different topologies: Franklin, Clapp, Vackář, Hartley at different frequencies from 60 to 500 MHz but there's no difference between them in terms of mains hum. I'm using an SDR receiver for demodulation, it works fine and cannot be the source of hum. Using battery instead of AC supply didn't help. I`m using 10 µF and 10 nF capacitors for decoupling. Using physically smaller inductors helped a little, but the noise is still unacceptable.

As suggested in comments, I've tested all circuit nodes with and without powering the circuit and 50 Hz component appears only at the antenna output.

Here are some PCB drawings, maybe there are mistakes in routing? 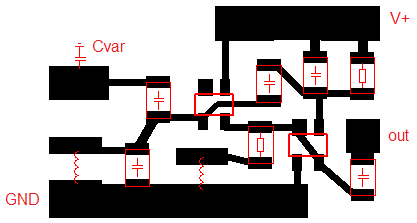 Uploading my setup and schematics as requested. The setup is just an SDR receiver and the oscillator with a piece of wire at the output as a makeshift antenna. The capacitive sensor Cvar is absent, as I'm using a fixed capacitor C4 instead. 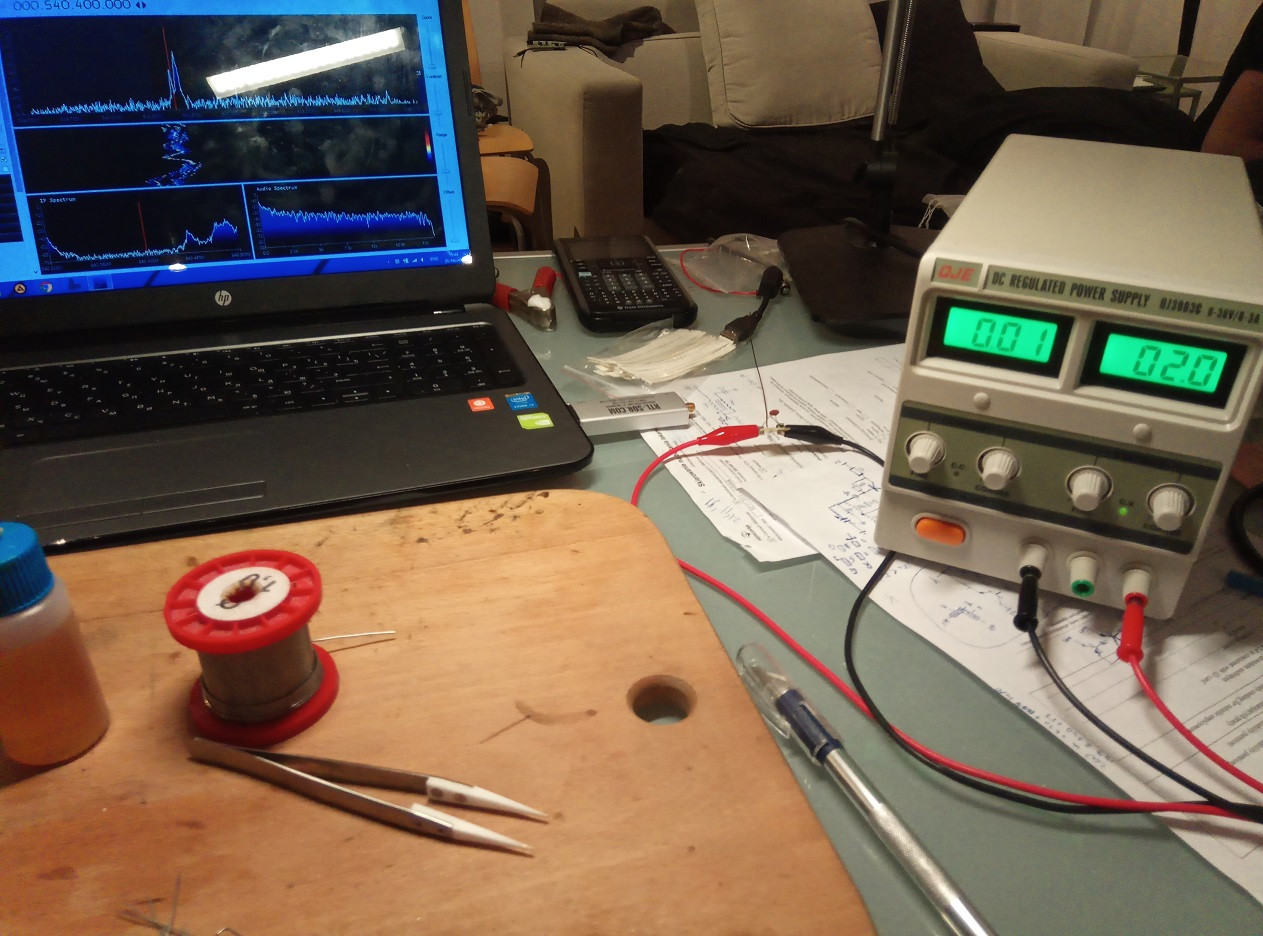 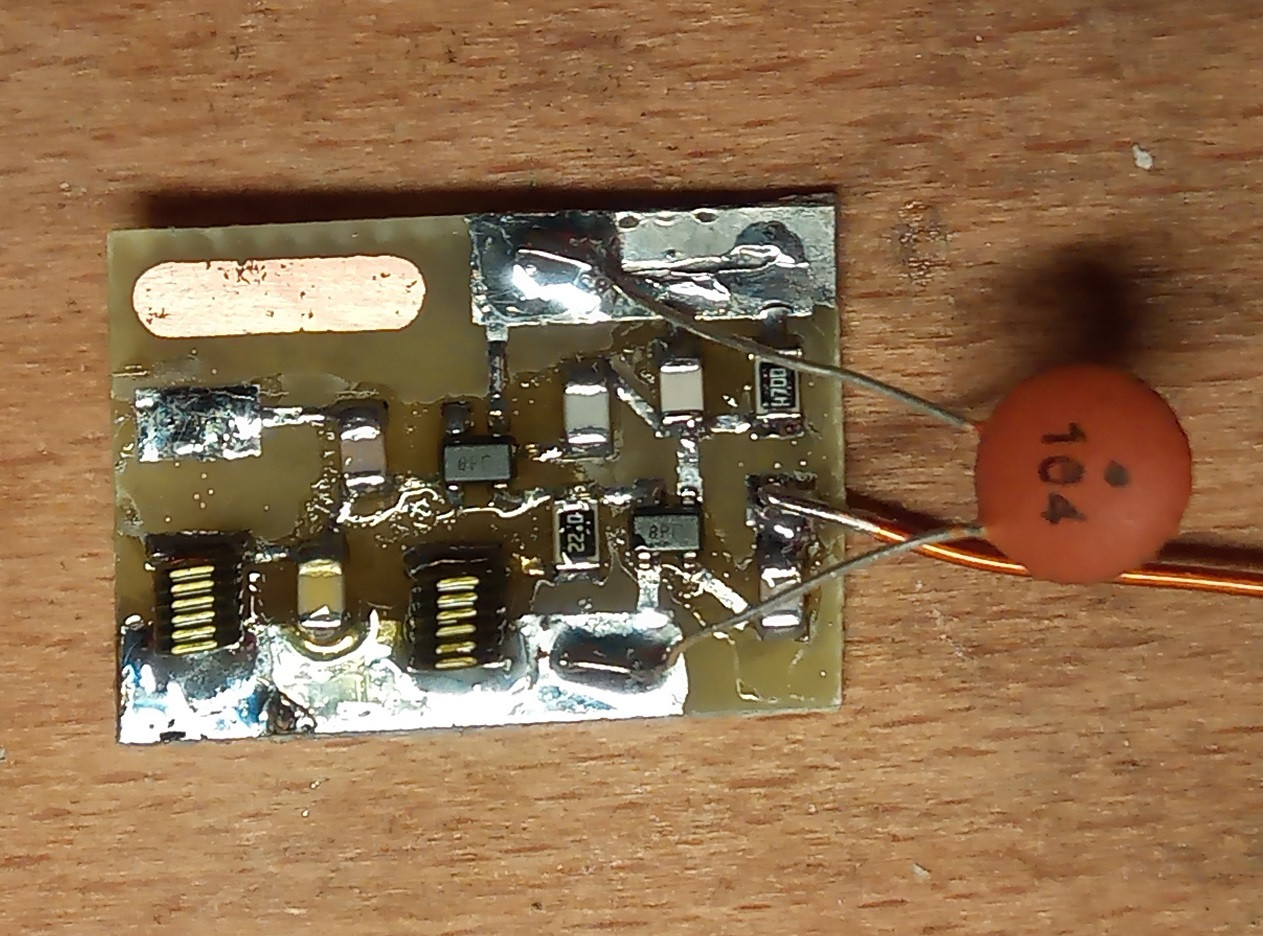 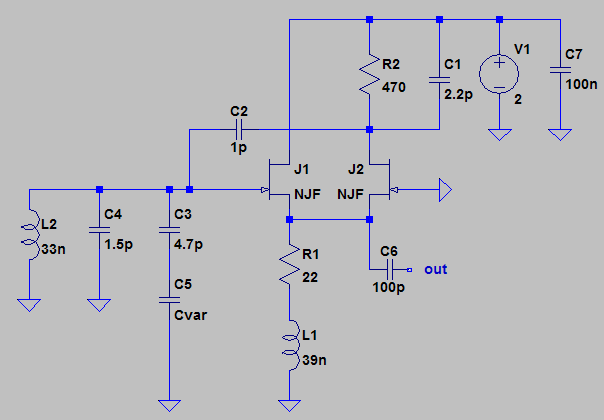 I've made a new board with a ground plane and a nickel silver EMI shield. I've added a 1.8V LD1117 regulator and 100pF and 390pF NP0 decoupling capacitors — and still no luck. There are no significant changes in the noise performance. Unfortunately, I couldn't find an iron box to put the whole circuit in, but I'm almost sure there are some clever circuit and PCB design techniques that do not require magnetic shielding. For example, I've tested the SDR receiver on a cheap unshielded FM transmitter: there's no hum at all, even with the volume maxed out, so the culprit is definitely the circuit and PCB design.

Here are some photos of the board (sorry for the flux, I did try to remove it but failed) 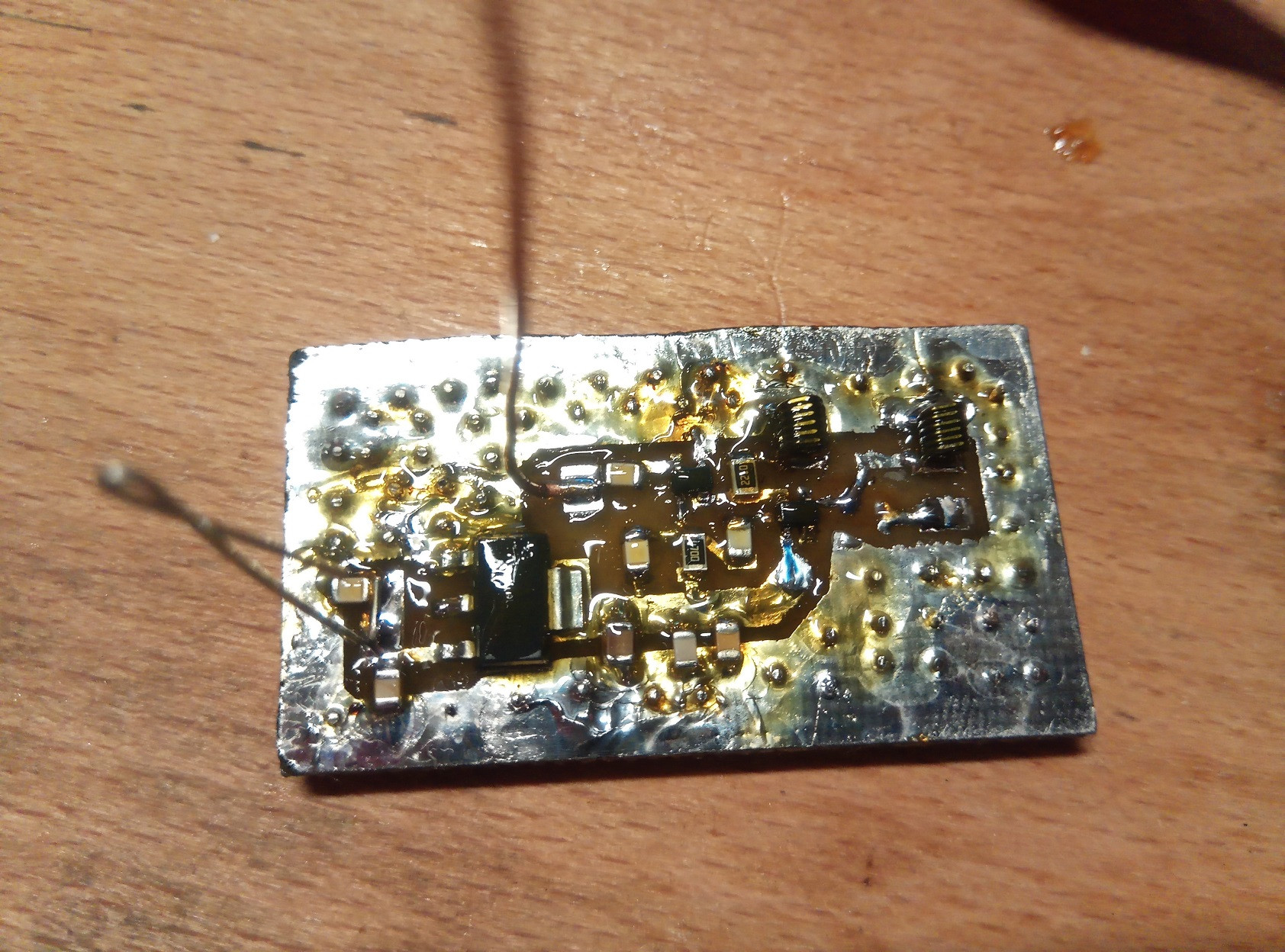 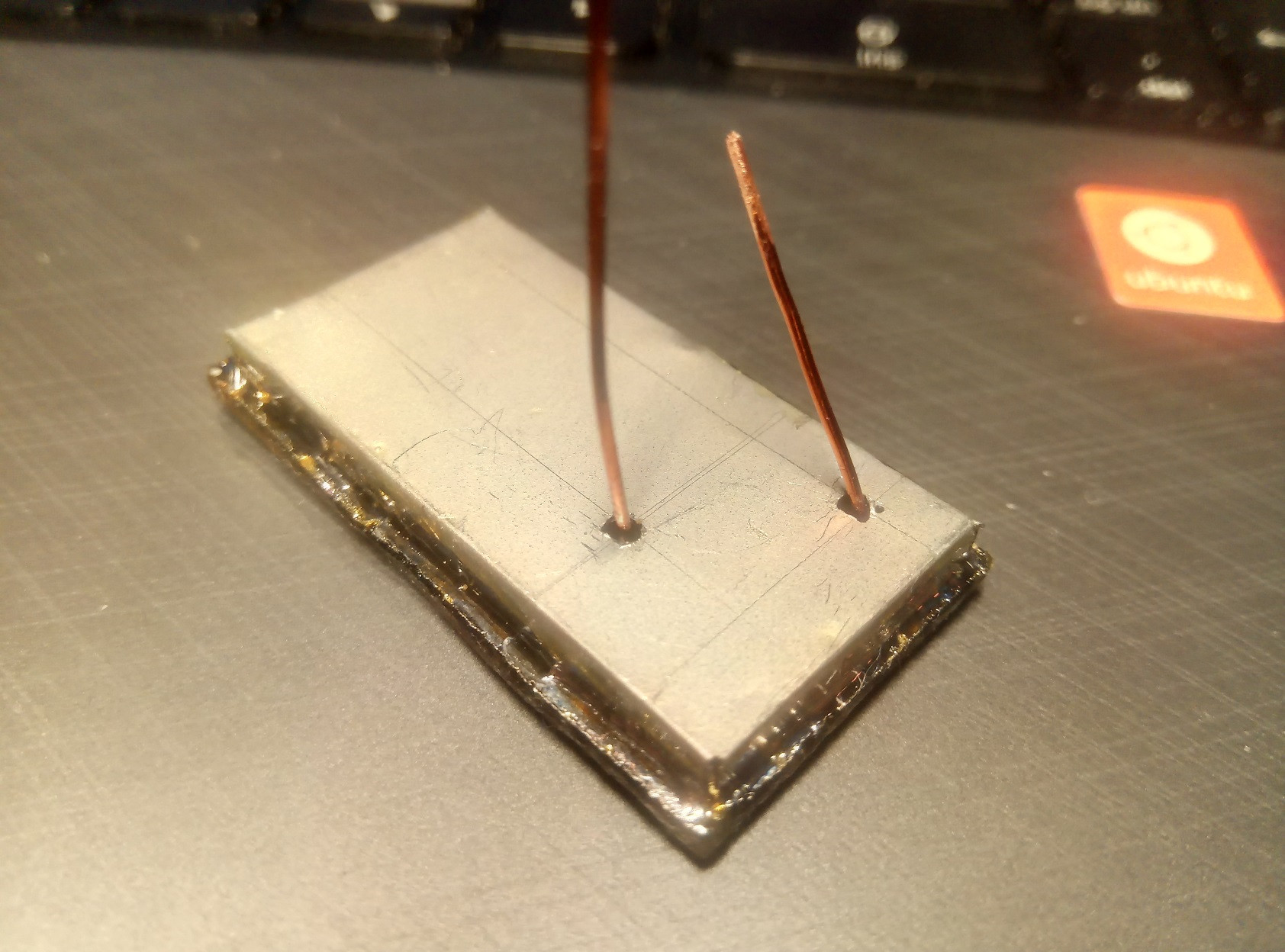 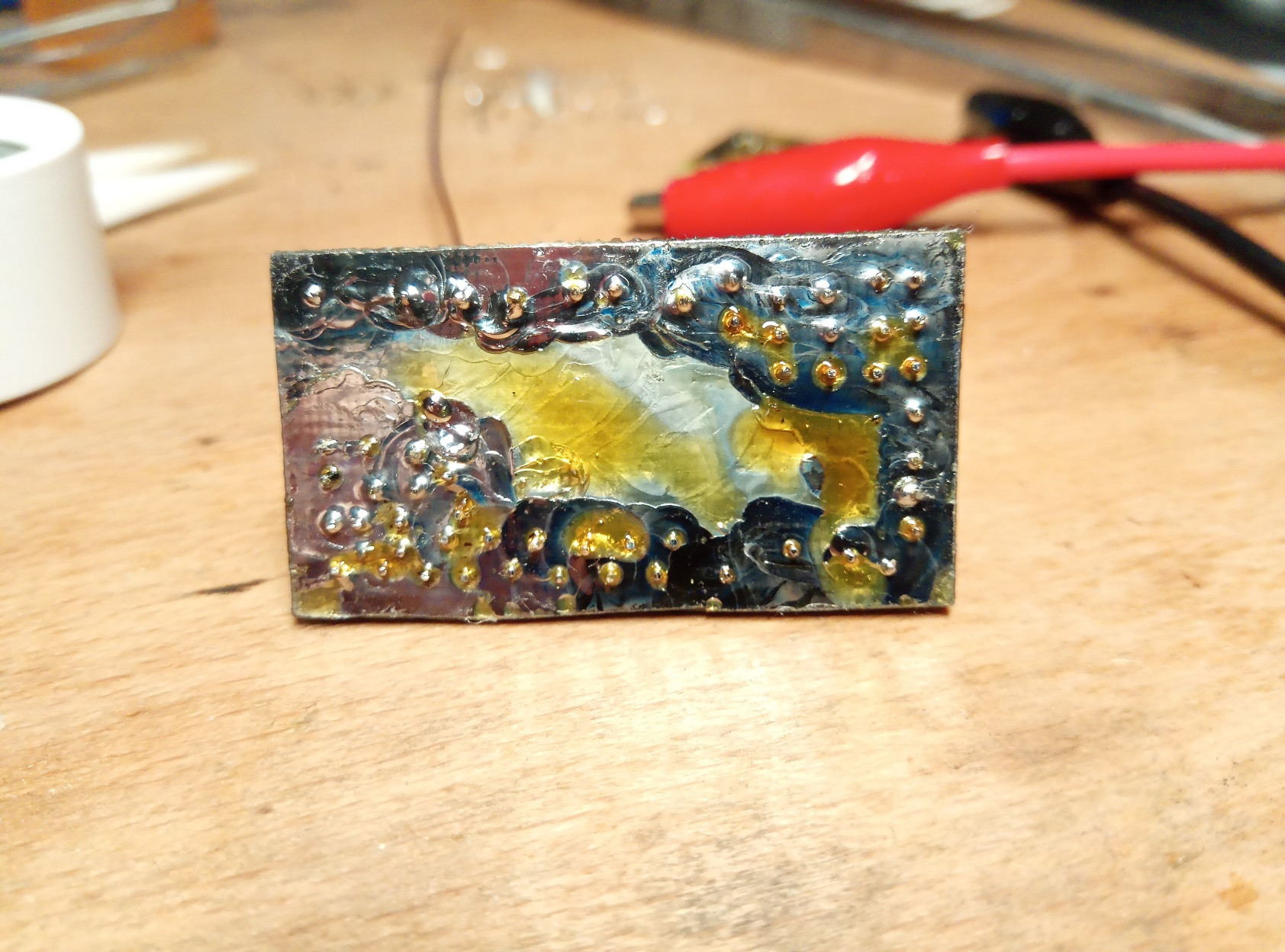 Also, as suggested in the answer below, I've recorded an IF from my SDR receiver and generated its spectrum at low frequencies.

Fig. 5a: Without the EMI shield

Fig. 5b: With the EMI shield

Now that is interesting.

Increasing C4 (see Fig. 3c) reduces the noise significantly. Look at the demodulated signal spectrums (the 440 Hz component is a test signal recorded from the sensor for SNR measurement): 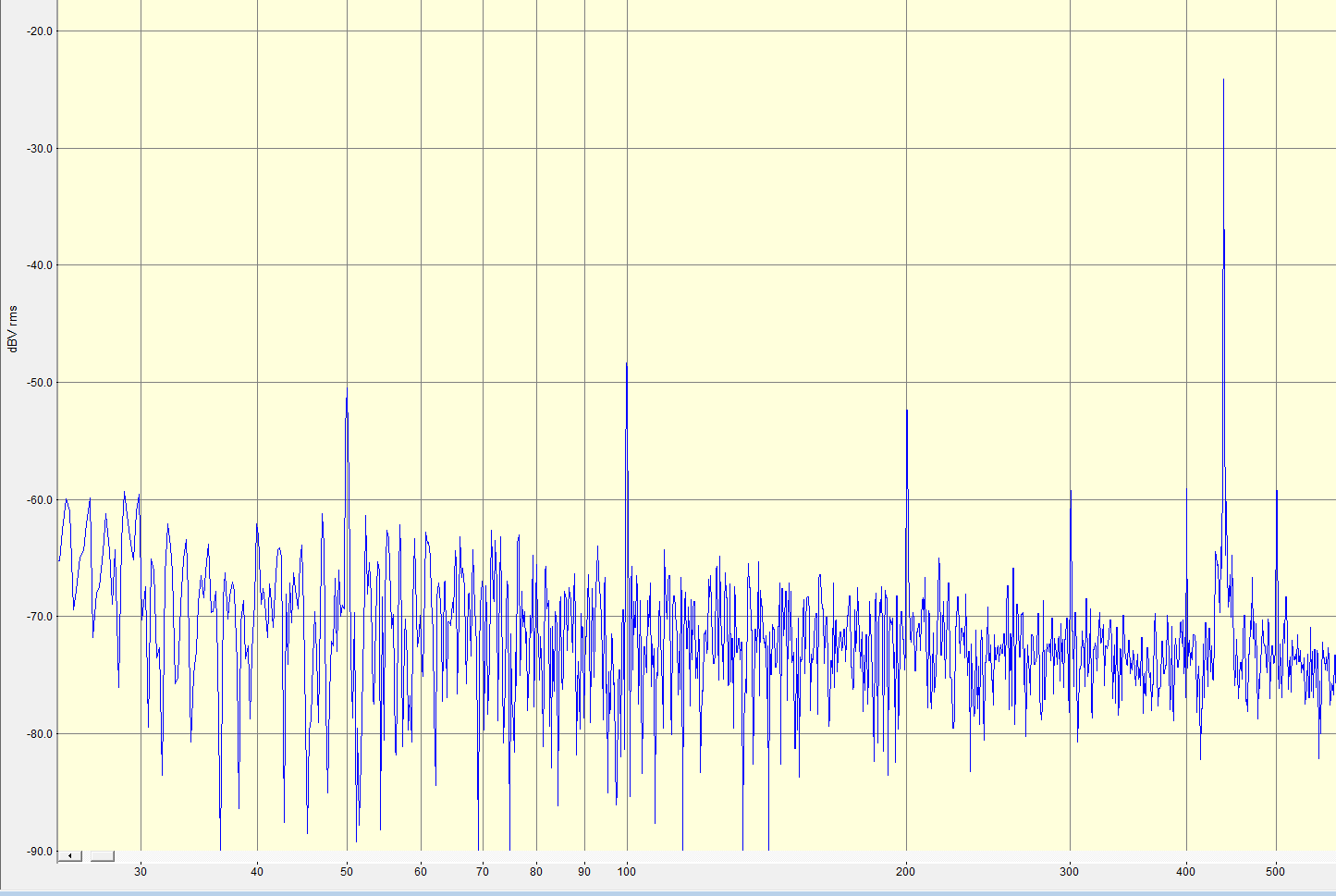 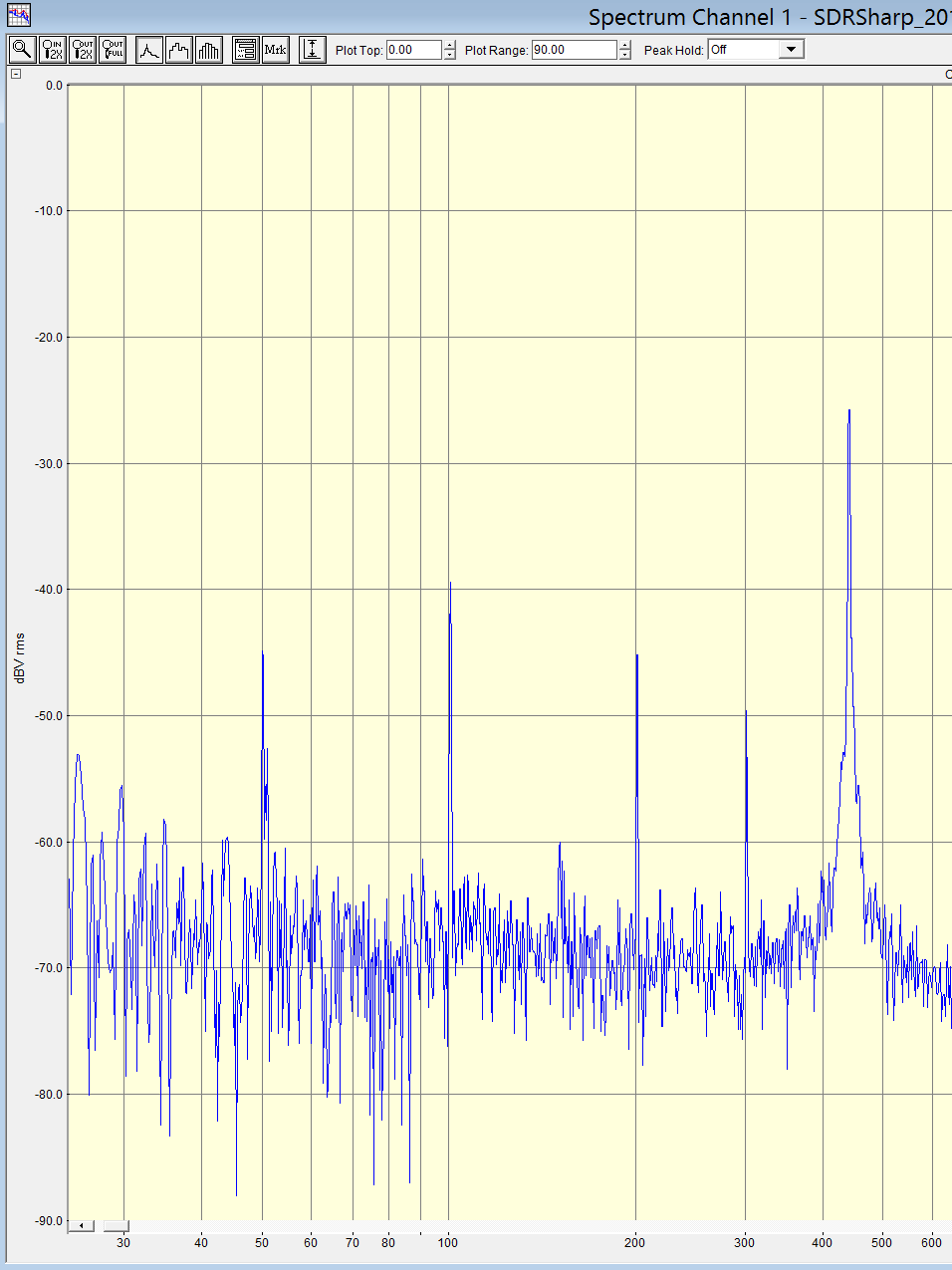 Unfortunately, I've got no other capacitors in the range between 1 and 10 pF to make further tests (the oscillator won't start with C4 ≥ 10 pF). I guess that the AC line noise picked by PCB traces and L2 changes the gate capacitance of J1, and increasing the value of C4 reduces the influence of those changes on frequency. This is also confirmed by adding a strong noise source, e.g. a cell phone making a call. You can see large spikes on Fig. 6c and the frequency does actually increase when I add a noise source, meaning that the gate capacitance of J1 is inversely proportional to voltage. Makes sense to me. Seems like I need to either reduce coupling between J1 and LC tank or add some high-pass filtering between them, but I'm not sure what the best way of doing it is. 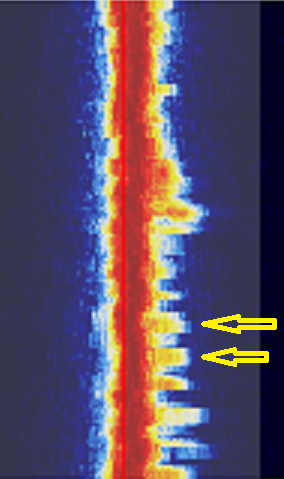 Gomunkul (in comments) & @user287001 may have nailed most of the hum problem:

It's probably your probe or the antenna that catches the hum from the air because the capacitor is an open circuit for 50Hz.

C6 may be a poor-quality capacitor that varies capacitance with voltage:

There is another possible hum mechanism, somewhat less likely....
This oscillator with antenna can be considered a crude direct-conversion receiver: its oscillations serve as the receiver's local oscillator. With such low-voltage DC bias voltages, this oscillator's active device junctions may have significant capacitance variations with changes in voltage. Where a junction sees both transmitted signal (strong) and received signal (weak), its bias voltage can vary, depending on the phase relationship between the two signals.

Far away, some diode junction(s) may receive some transmitted signal from your oscillator. Where these junctions are also turned on & off while rectifying 50 Hz mains, they re-transmit a 50 Hz. modulated signal back to the oscillator via wires or traces. At UHF, even a short wire becomes a coupled antenna element in this 2-element system. The 50 Hz modulated diode may inject a phase change back at the oscillator. It is characteristically full of harmonics, since those 50 Hz modulated diodes switch from on-to-off fairly rapidly. Your spectrum's 50 Hz harmonics seem quite strong.
DC power supply rectifying diodes are often the source.
LED lighting circuits could be another source.
Your cell-phone shifting frequency also supports this theory.

You might test for this phenomenon with the following (incomplete) circuit: 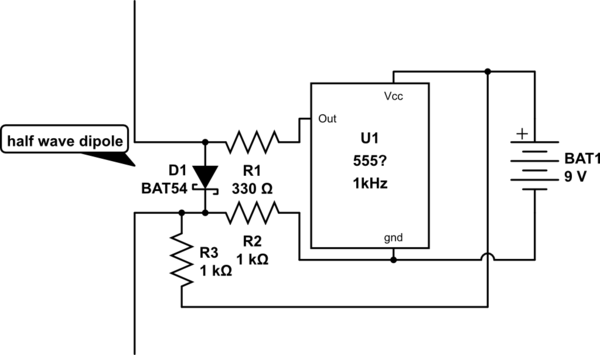 The half-wave dipole is cut for the oscillator-under-test's UHF frequency. Its diode connects between each 1/4 wave element. A 1kHz function generator could be used to turn the diode on-and-off rather than a 555 1 kHz oscillator. When this "mosquito" circuit is coupled to the transmitter's antenna, a monitoring receiver (AM PM or FM) may detect the 1kHz signal. Moving this "mosquito" circuit away from the oscillator-under-test should reduce the monitoring receiver's audible output.

An aside: this same coupling mechanism is sometimes present in doppler radar, and motion-detecting theft alarms. In this case, phase changes as the reflecting signal distance varies from the UHF signal oscillator.
You may get more insights by googling "tune-able hum" or tunable hum.

You schematic is inaccurate in the real physical model so it won't work as expected in your schematic.

For example your decoupling 0.1uF cap is about 20nH in the 2 leads of 2cm and 1mm thickness (est) and 1cm track length. Meanwhile your resonator uses 33nH , so your supply has poor impedance and as others suggest perhaps 100pF in a small SMD cap is needed. The overall layout is too big without a ground plane and therefore has a large loop antenna area for radiating and receiving stray electric fields.

I agree most of your hum is due to the large layout >5% of a wavelength for supply, ground and circuit loop path. This makes is prone to radiated noise and conducted ground noise. Using an RF CM balun or RF CM choke is essential for your DC supply to decouple it from AC grounds in addition to an RF cap preferably a 100pF NPO cap for lowest ESR.

Without a super narrow IF band Spectrum Analyzer (<100Hz) to examine AM vs FM , it is impossible to tell how much noise is in your SDR and how much is in the Tx. But either way the hum is mostly in your LCO design and DC power/return paths. If you had a lab RF gen. , then you can validate your SDR and a good RF SA to validate your noise source.

When we made VCO's in the mid 90's for 928 MHz ISM band for we made custom ceramic hybrids with custom metal lids seam soldered over the hybrid soldered to a GETEK FR4 substrate with another ground plane > 60 dB CNR ( carrier to noise ratio and low phase noise for a 6kHz Tx bandwidth used for automated 2 way meter reading.

If you master Ohms Law for RF using calculators for impedance of tracks, wires and coupling capacitance between stripline, you can understand better how to use a Balun to raise CM impedance then attenuate with shunt loads while controlling the differential impedance. This applies to 1GHz PHY networks as well as your Oscillator designs so you can observe similar designs to see these features and apply impedance ratios and Q of resonator to control the resulting SNR. It's all in the complex impedance ratios like a 2 dimensional version of Ohm's law with reactive impedance, then it starts to look simpler with antenna aperture effects. (Directional loop antenna)

If smaller coils help, your circuit probably catches magnetic fields. They can be quite strong near transformers or fluorescent lamps.

Your sensor cannot be elsewhere than in your circuit board at 500MHz. I guess it senses acceleration, humidity, some gas or pressure. You probably can put your circuit into a thick soft iron box which short circuits the external magnetic fieds even when having some holes for the needed connection to ouside air. You need a local voltage regulator to keep the AC fields out of the 2VDC operating voltage.

Sync your scope to mains AC and see, is the hum stable in the scope screen. If it's not, your circuit oscillates itself at about 50Hz.

Test also, is your circuit mechanically microphonic. I have made a transmitter which (unwantedly) picked quite weak vibrations.

You wrote "50Hz AC is present only at the antenna output" It's probably your probe or the antenna that catches the hum from the air because the capacitor is an open circuit for 50Hz.

The mains hum+harmonics also can be filtered out from the demodulated signal by filtering software. The filtering is essential for example in brain or heart tests and cleaning the audio signals.

Test your receiver with another transmitter. Is the receiver itself hum-free.

I understand an oscilloscope is expensive(unless you live in US. I've seen a lot of cheap scopes going to 500 MHz or so on ebay). You should get a signal generator and a milivoltmeter for those frequencies(you might be ok with a SDR for milivolmeter, depending on what you have). From the pictures you attached I suspect the oscillator doesn't work at all. That's not what a sinusoid looks like (be it 400MHz or 50Hz, a sinusoid is a sinusoid). Whatever shape you got there is so ugly you can't even name it. Try to analyze it in two steps: first step, make sure you can amplify a signal in that range. Second step: check what your tuned feedback does in that range. Yes, you need a signal generator for that. You might use the SDR as milivoltmeter/scope, but you do need a signal generator. Had you had hum, it should either 1)be gone on battery power supply or 2)be present even after you remove the battery.

Not the answer you're looking for? Browse other questions tagged rf noise oscillator or ask your own question.

1
How to filter low frequency noise on power supply from ChipCorder?
2
Mains hum without ground loop
1
Can RFI be radiated by connector wire even if shunted at opening?
3
Generation of Higher Freq from Lower Freq. Crystal
2
Colpitts oscillator's capacitors
0
Oscillator drift on presence of hand
4
Homemade GPS Receiver: Cascading LNAs and Band-Pass Filters?
5
Is removing noise with shield/capacitor making communication fail in this circuit?