I'm in the process of turning a Raspberry Pi project into a simpler circuit board powered with 555 and 4017 chips.

I want to be able to start by showing 7 LEDs, then go to 6 then to 5 and so on until all are dimmed.

I had tried using the step by step outputs of the 4017 chip and diodes to form an OR circuit, but I think I have all the LEDs in series (draining too much voltage) so the resultant brightness with more than a couple of LEDs is terrible.

Question 1: How can I have the LEDs counting down (AND with good voltage to the LEDs when they are lit), as above?

Question 2: The LEDs are just one half of the circuit board. How can I make sure that once the 4017 chip enters its eighth state, the LEDs STAY off (until the circuit board's power is turned off and on again)? The examples I'm finding on the web seem to circle continuously. Thanks.

There are many ways to do this, some include a bag of diodes.. or a micro, which would be overkill in my opinion.

The simplest is just to cascade some OR gates. 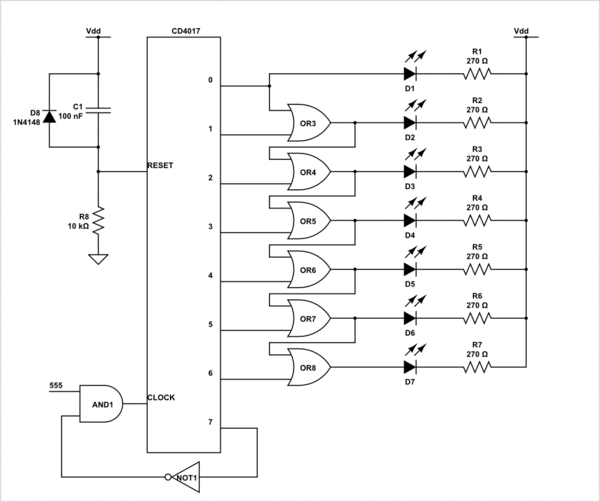 However : If that is all these outputs are being used for, you are using the wrong part here. You should consider using a shift register instead. Perhaps a CD4015. 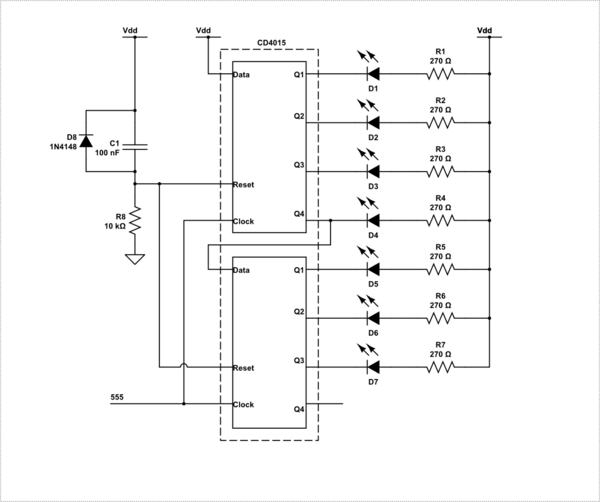 I did this for 5 leds using an ATTiny85, a reset button with 10k pulldown, and 2x AA batteries for power. No current limiting resistors required (due to the voltage of the two AAs). In theory you could use the reset pin for a 6th LED, but then you'd have to use the power switch to reset the controller. Arduino Sketch:

To program the ATTiny 85, see http://www.hobbytronics.co.uk/arduino-attiny for example.

Not the answer you're looking for? Browse other questions tagged led 555 cd4017 or ask your own question.