So I understand that the term "voltage" refers to the potential energy difference between two points. So, in a 5v battery, there is a 5v difference between the positive and negative ends. When these are connected in a circuit, the electrons naturally want to flow from one end to the other.

Also, does the potential energy difference between two points (voltage) determine the speed at which the electrons travel?

You're confusing (electrostatic) potential (aka voltage) with potential energy.

The choice of defining one type of charge as negative and the other as positive was made arbitrarily, before the electron (with negative charge) was identified as the primary current carrier in metallic conductors. By the time that was discovered it was too late to go back and re-define the charge polarities for the convenience of engineers. In any case, the "mixed-up" polarity definition should help you remember that electrons aren't the only charge carrier and when other carriers are present they might behave differently from electrons.

In order to understand electricity you have to go down to the atomic level.

The simplified model of an atom states that it has a nucleus of protons and neutrons that is surrounded by electrons that orbit around it.

The protons have a positive charge, and the electrons have a negative charge. Which is which polarity was discovered after the concept / standard of positive and negative voltages was created.

Normally there are an equal number of electrons as there are protons. The charges thereby cancel out and there is no net charge on the atom as a whole.

However, the electrons are only loosely bound to the atom and it is relatively easy to force an atom out of orbit. When this happens the atom then has a positive charge and becomes an ION. The free electron of course has a negative charge. As such, there is now a force between the ION and the free electron pulling them back together. This force is the electrical potential between the two.

With a battery or other power supply, the mechanism of the battery of power supply, forces large numbers of electrons to leave their atoms and accumulate at the negative terminal, sort of like parting the sea. This means there is a force pulling between the two which we can measure as the voltage across the terminals. The makeup of a battery or power-supply is such that the electrons are held apart and can not return through the supply.

When you connect a wire, or load, across the terminals you provide a path for the electrons to return to their natural state back at the ions.

However it is not quite as simple as that.

In the wire between there are more atoms with their electrons buzzing around them. When current flows what actually happens is electrons hop from atom to atom in a kind of long chain, akin to a bucket brigade. As each electron hops forward it leaves an ion behind it which attracts an electron from the previous atom and on and on down the wire.

How fast the electrons move will depend only slightly on the voltage across the terminals. How many of them are moving at once does depend on the voltage. In reality, individually, they move quite slowly. 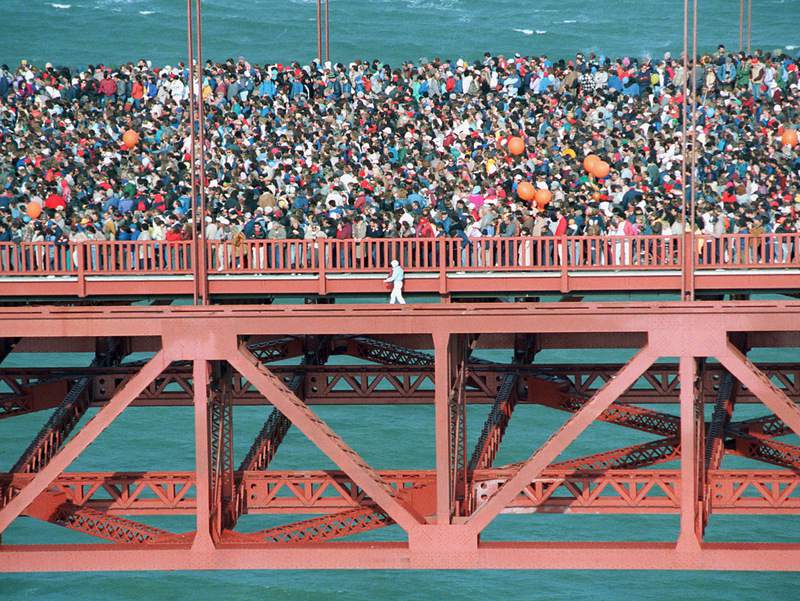 They are all walking about the same speed, but there are so many more people jostling to cross at the top that the total "current" of bodies is large. The poor guy in white on the girder is all alone, the "current" on that path is small.

Electron flow mostly comes down to the fact that opposites attract and likes repel.

As to speed of movement of electrons: it depends on what exactly you're talking about. An electron normally orbits the nucleus of an atom at a fairly fixed speed. Voltage doesn't affect that to any significant degree.

For a loose analogy, think of a person pushing a heavy weight. Higher voltage is equivalent to a person who's stronger, so he can push a heavier weight. Being able to push a heavy weight doesn't necessarily mean he can run particularly fast.

For conservative fields, like the electric (electrostatic) field, the force on a charged particle with charge \$q\$ due to the electric field is given by: $$F = -q\frac{dV}{dx}$$ From Newton's Law we know that any particle will move in the direction of the net force applied to it. In the absence of any other force there will just be the electrostatic force applied to the particle (given by above equation). And it is clear from the equation that the force is in the direction of decreasing V (because negative \$dV\$ makes the right hand side positive). Thus any charged particle will move from a region of higher potential to a lower one if acted upon by only the electrostatic force.

All have answered very well. Let me explain it in another way:

now we know that here q is negative for an electron. So its obvious from the equation that the force on electrons is in the opposite direction to the electric field. Hence, electrons will move from B to A. i.e, from lower potential to higher potential.

You have it the wrong way round.

When we have a battery, and connect a conductor between the terminals, we notice that a current flows. We notice that this current deposits heat in the conductor.

If we do careful experiments, measure the current, measure the power, we find that their ratio is well-behaved, and we can identify it with the voltage of the battery. If we put batteries in series, their voltages add, and it all works.

As to why this all happens, nobody knows.

There are all sorts of 'explanations', which are really ways to do sums to predict what happens, at various levels. With volts and amps, we are doing sums with circuit theory. With electron charge and fields, it's electronic physics. With photons and QED, it's quantum mechanics.

You can use any of them to explain what's going on, if you take for granted the validity of the underlying assumptions. If you ask why, then you find yourself going deeper and deeper down the rabbit hole, and the ultimate answer is 'because that's the way the universe works'.

Not the answer you're looking for? Browse other questions tagged voltage electron or ask your own question.

2
Electric potential and the flow of electrons in a battery
0
current flow from positive to positive between batteries?
2
If an electron has 0 electric potential after passing through a resistor, how does it flow to the other terminal
0
Why does high voltage imply a high "pushing force" on electrons?
2
Visualizing Electrical Potential
0
How can an electron have 0 electric potential after exiting a resistor but have current?
4
Potential difference and current flow
0
Does current flow between a positively charged conductor and a neutral conductor?
1
If greater potential energy is toward pos charge, then why PN energy band diagram show lower energy toward pos charge across depletion region?