I'm wondering if it's possible to drive 50W via PoE (cat 6e or cat 7) single cable? I want to power up a quite hungry ARM board, which has power rating of 5V 3A (15W) and a camera, which needs 12V 2.5A (~36W), so it will be a total of 50W power. I was thinking of driving 48V 1.1A via the cable and use two DC-DC step down converters, one for camera and the second one for the board. Cable length shouldn't be more than 10m, so power loss is neglectable. Am I overthinking this too much and standalone power cable will be an easier/safer solution?

Thanks everyone. I was unaware of special PoE equipment for network and power on the same rail, and since I'm going to use gigabit ethernet, it really seems that standalone 48V cable would be a better solution.

Yes you can deliver 50W over a cat 5 cable, the POE standard supports this: 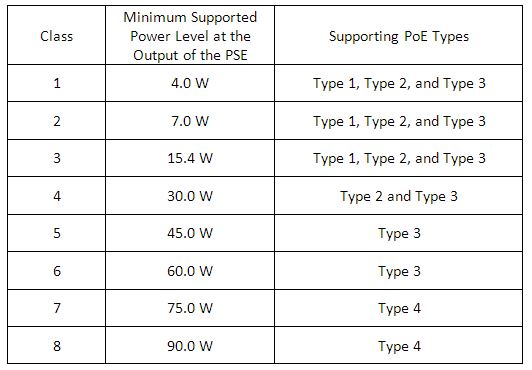 There are two ways to do this:

So you would want to use the first method, with a step up DC/DC converter to boost the voltage to 48V. On the device end you can use your step down DC\DC's. The voltage is boosted to cut back on resistive losses in the cable. There are transformers that block DC on ethernet devices so your probably not going to get into too much trouble if you mix things up.

If you want it to be compatible with standards, then you will want to use the appropriate detection circuits. Usually POE uses rectifiers on the device end so either AC or DC can be used, but you also have a diode drop. If your running your own custom solution and pay attention to polarity then you would not need this.

In order to call what you (want to) do PoE, you have to adhere to the standards, see this wikipedia page.

In the article it is mentioned that there is a PoE variant in the making for 55 W and more, so yes, it is possible.

However you might just want to use the cable for delivering the power, adhering to the standard might be less of a concern assuming you're not going to use proper PoE equipment.

If so, do you need only 100 Mbit networking because that uses only two of the four pairs of connections meaning you can use the other pairs for power delivery.

If you want 1 GBit ethernet, things become complex as all 4 pairs will be needed for ethernet as well. It is possible to do 1 GBit ethernet and power over the same cable (that's how PoE works) but that means you need filters or real PoE equipment (which I believe does not exist yet for 55 W).

You should not just put a DC voltage on the cable when it is also used for Ethernet as that could damage your equipment.

Cable length shouldn't be more than 10m, so power loss is neglectable

Not the answer you're looking for? Browse other questions tagged power dc-dc-converter ethernet poe or ask your own question.

4
Passive POE: Need 5V @ 2A at the destination
2
Powering multiple devices from a single supply with 48V
1
How to implement PoE with WIZnet W5500?
0
Battery and voltage connections
0
How can I make a PoE circuit that is compatible with 24V passive PoE and 802.3at active PoE?
0
Parallel PoE injector from pc psu?
0
Gigabit detection DIY
1
DC-DC Buck Converter Failure Mystery