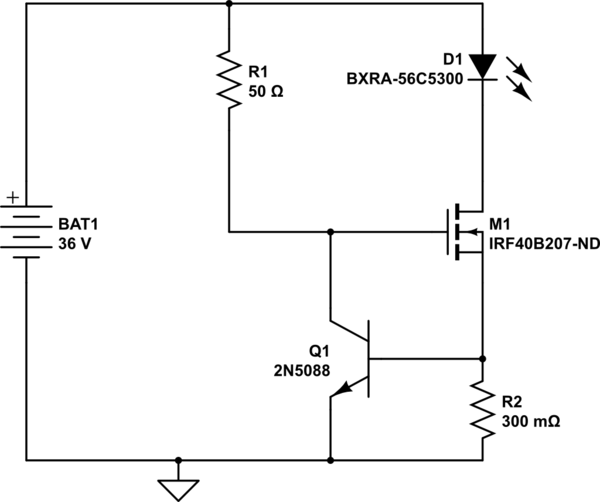 simulate this circuit – Schematic created using CircuitLab Above schematic is for limiting current to 4A when battery is connected to LEDs.

Powering 32 such LED with DC power supply of 24V 67A. Limiting current to each parallel connected LED to 2.1 A using current limiting resistor of 1 ohm 5W rating. LEDs are mounted on heat sink

Requirement is to drive each LED string at Max rated current of 4A when required and then switch back to regular operation which is described in current design above.This switching should be digitally controllable.I understand my current DC power supply cannot supply so much of high current.So I was thinking to use another power source.I have in mind to use SLA(car batteries).

Since LEDs are connected in parallel each LED will required its own current limiting circuit so equal amount current is supplied to each LED.

Can anyone suggest me circuit for achieving this digitally switching between current limiter circuit of 4A(shown above) and 2.1A?

I simulated this circuit in proteus and I was getting 3.8 A flowing through LED string. But I am still figuring out how can I switch between this limited current to my current setup of 2.1 A . I need to run entire array of LEDs @2.1A most of the time and only on requirement need to switch to 4A . So I need to switch between two these two power supplies. 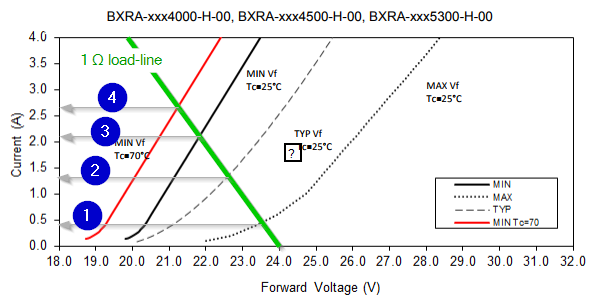 There are four curves given from MAX Vf through "typical" to MIN Vf all at 25°C. Then there is the red line at 70°C.

The green load-line represents your 1 Ω resistor. It will drop 1 V/A so at 4 A the voltage will have dropped to 20 V. The voltage and current for each LED curve can be estimated by the intersection of the curve with the load-line.

The problem is that you haven't enough headroom for a simple resistive current limiter. If you had several more volts available the load-line wouldn't be so steep and the current wouldn't vary so much.

Note also that you are assuming your batteries will give constant voltage. They won't!

Many of the LED power supplies such as those by Mean Well, etc., offer three modes of control: output constant current level can be adjusted through the control input

In your case you would purchase a PSU model that would supply the required peak current and run it normally in dimmed mode (reduced current).

I haven't checked all the details for you so you have some engineering to do. In particular, make sure that the current can be controlled over the range of Vf voltages you are interested in.

I've written more on the subject in the article lined above. Load-line resistance graphic tool may also be of interest in explaining in more detail how to use the load-line - although the article deals with lower voltage circuits.

I see some problems with your approach. With a 24V power supply, 23.5 Vf and 1 ohm resistor you are only going to get 0.5 Amps, not 2.1. Also Vf is a typical value and slight changes in Vf could result in big changes in current and brightness because Vf is so close to yout 24 V power supply. You really need a an LED driver, Linear Tech is a good place to start. FET switches could be used to switch between the two power sources, but you may find an LED driver that can achieve what you want with a single power supply.

You can't put 50W Leds in parallel because there is no current regulating device for such powerful Leds. Your resistor will not make it: it's rated 1/10 of the Led power and 1 Ohm regulates almost nothing. Transistor explained that more scientificaly with the chart. Each Led must have its own AC/DC constant current supply, and even two if you want to switch different currents as there is no other way to control current at these power levels. Each supply being monitored with a relay. Also I wouldn't use the LEDs at or near maximum current. 3A should be the maximum in your case, and for a very short time, one minute or so and with an X-large heatsink. 3A is 75W. Also consider that you don't put 64 such LEDs next to each other, so add to this cables with monstruous diameter. Were your LEDs be 10 times smaller, it would be another story.

Not the answer you're looking for? Browse other questions tagged power-supply led switching current-limiting led-driver or ask your own question.