Are hand held AC power testers (the ones that looks like a screwdriver) completely safe? Why/why not? 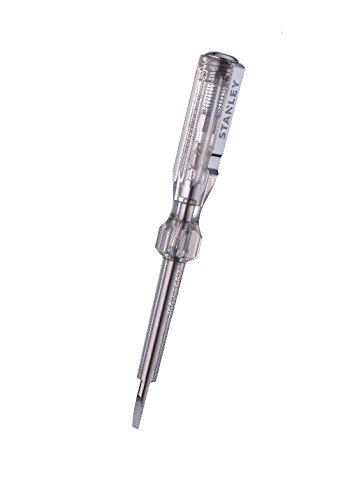 What are chances that the carbon resistor gets shorted and we experience lot of current and die? Cause of doubt arisal:

This is the type of tester where you're expected to touch the metal contact at the top of the screwdriver, which completes a circuit from the live wire at the tip through a high-value resistor and a neon bulb. (And through your body's capacitance back to ground.)

In order to get a shock, the resistor would have to fail shorted and the neon bulb would have to allow enough current to be dangerous. Fairly unlikely at mains voltages if the tester was constructed with proper creepage and clearance distances.

What's far more dangerous in my opinion is that the neon bulb may not light under certain conditions leading you to believe that an energized circuit was not powered.

You're far better off getting a multimeter, even a relatively cheap one is better than this thing.

These have been around since Adam were a lad, and yet you never hear "Another home owner died today using an AC test screwdriver!" on the news.

The truth is, like any tool, if you maintain them properly, and use them as intended, the chances of them hurting you is minor, but not zero.

The thing to remember with these though is the logic is...

That means, never rely on one to test a wire before you grab it with your fingers.

Those screwdrivers work by capacitive coupling of the body to the power lines. As long as you are not physically touching ground, even the loss of the limiting resistor won't cause much problem.

However, if you happen to be connected to ground and touch a live connection AND the limiting resistor is shorted, the only thing between you and electrocution is the ability of the neon bulb to act as a fuse. I don't know what the current-limiting characteristics of a small neon lamp are, but it's not something I'd bet my life on. Just as importantly, if you're up on a ladder checking fixtures (and the ladder is making contact with ground - for instance through a water puddle or carelessly placed wire with pinched insulation) and you make the circuit, you're going to take a header onto the floor no matter how well the neon/fuse works.

Is it likely? Nope. Is the risk acceptable? That's for you to decide. It is, however, the sort of easily-avoidable risk that most safety folks get riled up about.

Those screwdrivers have an advantage over multimeters. The screwdriver shows you if there is a voltage between the wire and the ground (beneath your feet) rather than between two wires.

I've seen screwed up wiring where you measure between hot and what is supposed to be neutral, and get zero volts - because things are wired so far wrong that a wire color coded as neutral is actually hot.

Don't think it happens? I went to put up a new lamp in the living room of my daughter's apartment a few weeks ago.

The existing lamp was connected to two blue wires - by color code, that's neutral. One of the two was hot, and there was also a black (color code for hot) in the junction box in the ceiling.

So, between one blue and the black I would have measured 0 volts with the meter, but the screwdriver showed hot for the black and one blue.

I installed the new lamp, then told my daughter to complain to the landlord. The reaction was "Meh. An electrician did it, it must be OK."

I don't trust the screwdrivers completely, either. I always check first to see that it shows power on the hot, and nothing on neutral. Then I flip the circuit breaker for that circuit, and check that it now shows dead on hot and neutral. If it showed live before and dead after flipping the breaker, then I'm pretty sure the power is really off.

Another thing that makes it safer than you might think is that carbon resistors fail open.

Too much current, and the resistor literally burns out. It gets hot, and the carbon smolders and burns through. This leaves you with an open circuit, so you can't get zapped when using the screwdriver tester.

Carbon resistors also increase in resistance as they age. They also fail open if they are mechanically damaged - they crack, and don't conduct anymore.

Of course, if it fails open you might think there's no voltage present when the circuit is live. That's why you check to make sure it works before you use it see if a wire is really safe to touch.

Looks safe when new. But I would never recommend it when better alternatives exist.

It is almost equivalent to connecting an ESD wrist strap to line voltage.

If water or condensation coats the carbon, it won't be safe.
If the voltage is > 0.5kV it may not be safe.

0
Resistance as a function of base voltage in a transistor
2
Voltage Regulator vs Voltage Divider
2
Is high temperatures breaking the circuit?
3
Why doesn't the winding coil burn
5
use of toroidal ring in hair dryer safety plug
6
Safely burning resistors - carbon film vs. metal film
5
Why does a pull down resistor eliminate floating input
1
Why would doing the "outlet challenge" cause notable damage to outlet and wiring?
0
How is the current through this resistor not obeying ohm's law?
1
What is the difference between European and American "Ground/Neutral" desgination?