Please tell me what will happen if the instrumentation amplifier is constructed as this circuit? As in this, two resistances R1 are grounded in between? What is the problem in this circuit?

In short, with the split and grounded R1 circuit, A1 and A2 amplify both common and differential mode signals by the same gain. 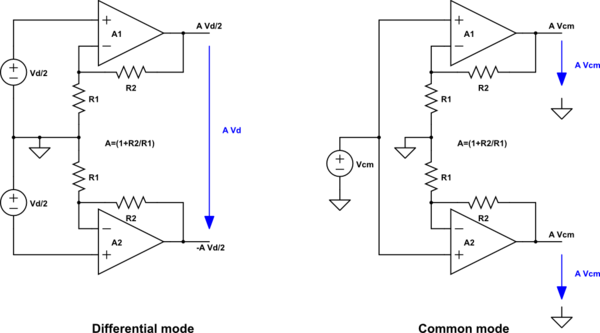 So their outputs will be easily saturated when trying to extract a tiny differential mode signal superposed on a high common mode. 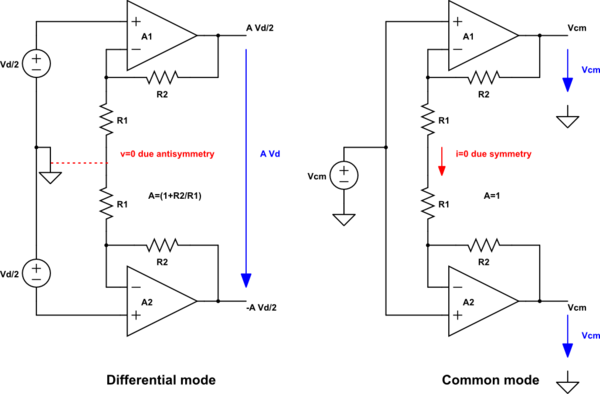 That's the clever thing about it, it helps extracting "small" differential on "high" common mode, improves CMMR and dynamic range.

Usually the R1+R1 resistor is not split and grounded in the middle. That allows for the adjustment of a single resistor to adjust the overall gain.

With your circuit the two inputs are effectively amplified seperately, this causes several problems.

Your points 2 & 3 apply to both topologies.

They apply slightly to the conventional topology and far more severely to the OPs topology.

As a first approximation lets consider the case where the op-amps are ideal but the resistors are not.

Ext. Icm*Zcm to Gnd and local gnd here cannot be equivalent voltage thus suffer from high gain of this "difference", so CM voltage gets high gain in the front end relative to local gnd. Not good.

12
Why are two stages used for an instrumentation amplifier?
0
Parallel OpAmp configuration
-1
Why is an Instrumentation Amplifier Used Over a Standard Differential Amplifier?