I've just finished designing my own laboratory power supply unit. At first I wanted it to be 0-3A current limited, ~1-30V, but I've changed my mind about it - I think I might need more acuracy in the lower current levels instead of higher currents. For ease of design I decided that it'll be powered from a laptop charger. The choice of charger and LT3080 for current precision made it 0-1A, 1-20V. The whole thing is monitored and controlled by microcontroller.

About the whole project idea: this is a hobby project. I know that one can buy better bench PSU cheaper, but beside having a power supply I want to build it.

I have some concerns about parts of the circuit, namely:

Is there anything else you see here that doesn't seem right? Are there any flaws with the schematic readability (there are everywhere, but how can I improve it)? 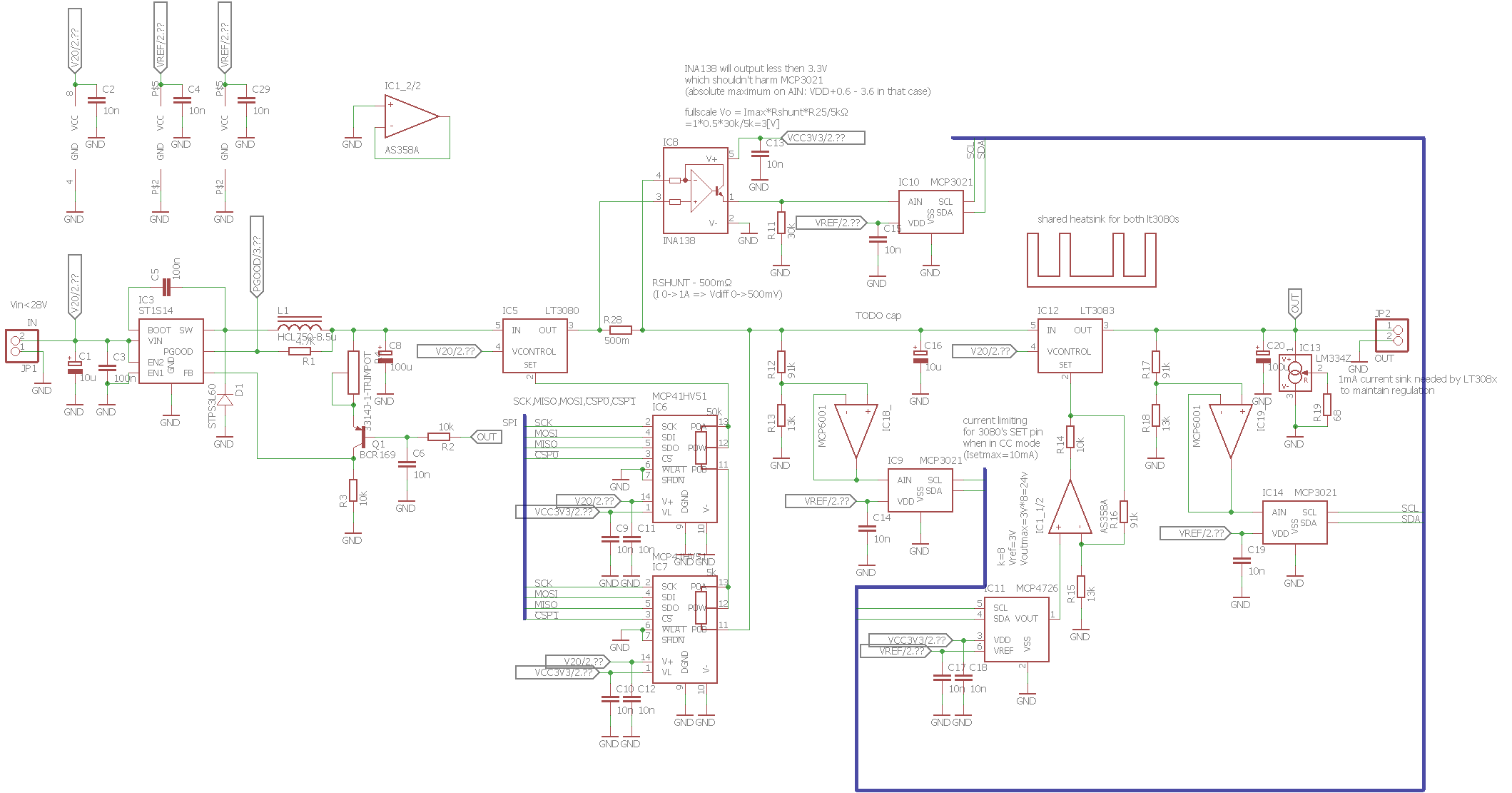 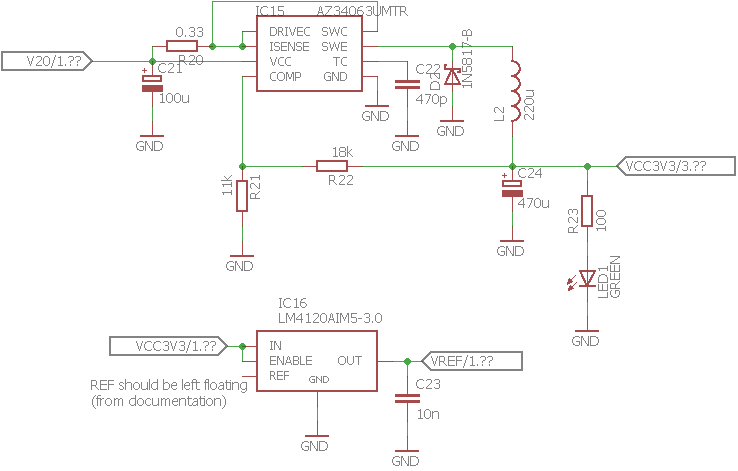 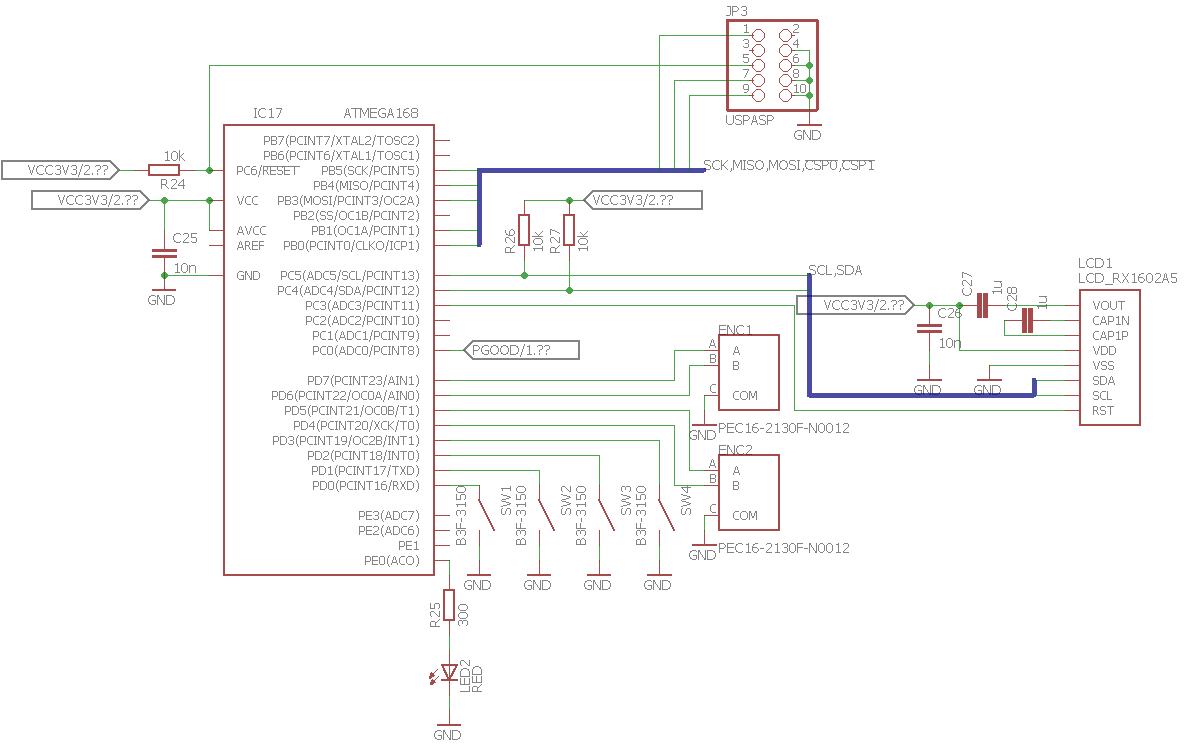 Update - I've rethinked preregulator control part and came up with a way to drive it with analog feedback. This makes things a bit less complicated. I tested it in LTspice (with some LT dc-dc ICs) and it apears to be working.

LT3080 is not a great choice for a postregulator. It has maybe 30 dB of ripple rejection at 850 kHz, where the ST1S14 switches: 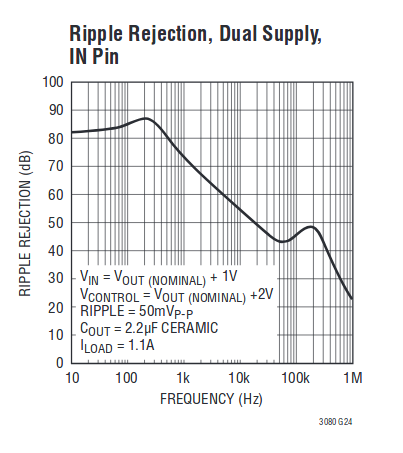 You can probably replace IC8, IC9, IC2.2, and IC10 with a single INA129. Current measurement is compromised at that location by the extra load of the voltage dividers and IC12

The LM334Z works to 1V, so don't expect this circuit to regulate below 1V because the LT3083 won't have its minimum load current.

Consider the circuit behavior at 20V, 1A setting. When you short the output, IC5 will dissipate 20W. Unless you put the microcontroller inside the control loop, but then you will have compromised the transient response when the load is removed from the output.

You have two MCP47x6 DACs on the same I2C bus. You will have to be careful to order them with different I2C addresses. Why not replace them with a dual DAC and spare yourself the hassle? Same goes for the different MCP3021 on the same bus.

IC2_1/2 and IC2_2/2 are not connected correctly. I assume the (-) input is meant to be connected to the output. As it is now, the op-amps will saturate to their positive rails, possibly damaging the ADCs.

Whenever there is an op-amp driving an ADC, I like to power the op-amp from the same-voltage supply as the ADC, so the ADC will never have its absmax input voltage exceeded. This may require the use of rail-to-rail opamps.

Not the answer you're looking for? Browse other questions tagged power-supply switch-mode-power-supply schematics or ask your own question.