Why is there no tri-state during T2 state of this machine cycle?

My teacher provided this as part of printed notes where he writes there is no tristate during the T2 state of Memory Write Cycle. I am quite confused about why it is so.

After a short search in the internet, I didn't find any such statements anywhere. Can the tristate exist in T2 too or is this optional? If it is true, why is it so? 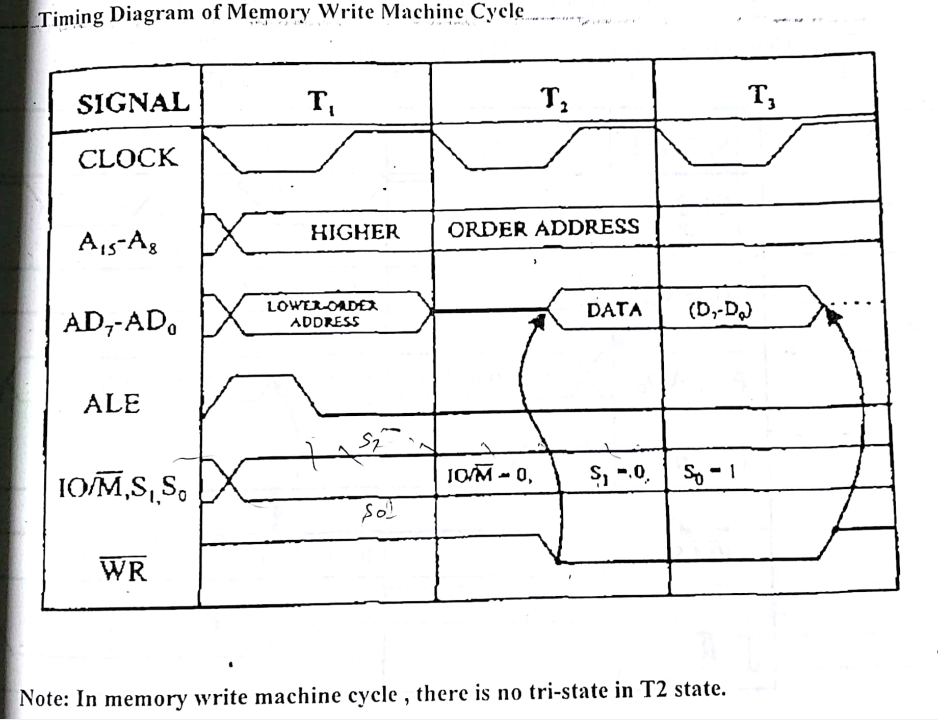 Obviously, there can be no "tristate" on AD[7:0] during either T2 or T3, because the CPU must use those lines to drive the data that is to be written to memory. The data needs to be valid for the duration of the WR- pulse and a little beyond.

What the footnote is saying is that while there's a transition between the low-order address values and the data values during T2, the bus is never actually "not driven".

A more detailed timing diagram would show a certain amount of hold time for the address bits following ALE. It would also show a certain amount of setup time for the data bits with respect to WR-. In between, the bus values are "undefined", but not high-impedance. In the diagram, this difference is denoted by the solid line before vs. the dotted line after the DATA bits on AD[7:0].

There's actually a subtle reason that they felt the need to add the footnote. Sometimes a system designer would rely on the fact that bus capacitance effectively extends the hold time when a bus driver switches off (tristates). In this case, they're explicitly stating that this is not true during this type of cycle.

I think that at the end of the T1 state the processor removes the lower-order address and immediately places the data on the bus.

I suspect the timing diagram is a little "off" and the words are an attempt to fix it without paying the graphic artist.. 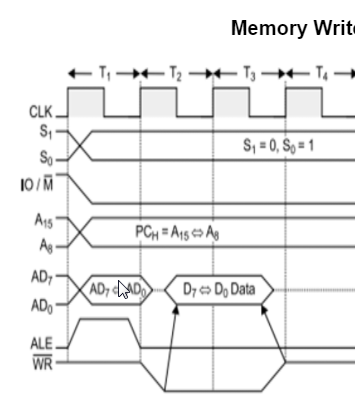 Anyway, the line down the middle between high and low should be taken to indicate that the data is invalid, not that the bus is tristated, but it makes very little practical difference.

Not the answer you're looking for? Browse other questions tagged microprocessor 8085 or ask your own question.

0
Why the time of execution is never shown in any Instruction Cycle?
1
State of mutli-cycle processor during execution of instruction
0
What is difference between Wait state & Bus idle machine cycle in Case of 8085 Microprocessor?
4
Finite State Machine Handling Timers Gracefully?
1
8085 μp; Why does Read cycle take 3 T-states and not 2?
3
8085; Why RET doesn't require a 6 T-states Fetch cycle?
2
8085 ; High impedance state of lower order address/multiplexed data bus during memory read and write machine cycles
2
Why does the conditional CALL instruction in the 8085 microprocessor take 2 machine cycles, when the condition is not satisfied?
0
Difference between clock cycle, machine cycle and instruction cycle of the CPU