I have been dealing with these differential amplifiers for weeks now and still don't understand the basic principles of its operation and how should it be used inside an audio amplifier.

I understand everything to the point when input (say AC) signal is applied to circuit. I completely do not understand how should negative feedback from output of amplifier back to non-inverting input do anything at all. All that distortion canceling within diff-amplifier pair negative feedback is totally unclear to me (in practical way mostly). 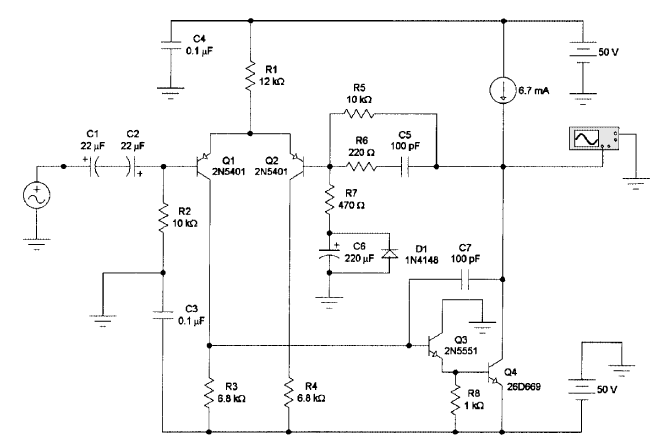 Any answer to one of this question with practical example would certainly improve my understanding of this "wonder".

And in general case, the negative feedback always reduces distortions.

In your amplifier, the Q1, Q2 as its name suggests working as a differential amplifier. And the job for this Diff amp is to amplify (only) the difference between the two its inputs.

If Vout is larger than expected (Vin) the Q2 will reduce his Ic current. But at the same time, the Q1 Ic current will goes up. And Q3 and Q4 current will also increase so the Vout voltage will drop.

And to show you how this "error signal" seen at the diff amp input looks like.

I made this simple circuit in LTspice. 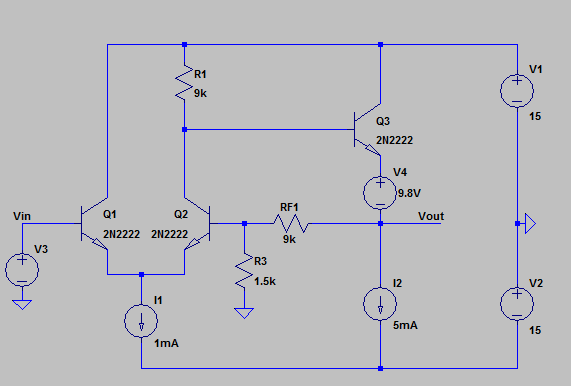 And the output voltage for "pure" sinewave at the input looks like this (together with the signal error in red): 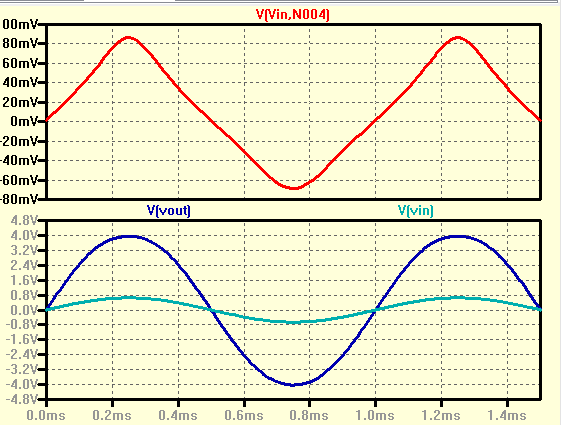 It seems like what you're having trouble understanding is about differential amplifiers and negative feedback in general rather than this specific circuit, so let's generalize this.

The first thing we need to do is identify the feedback going from the output to the input, and then consider the circuit without it. I've highlighted the feedback network here: 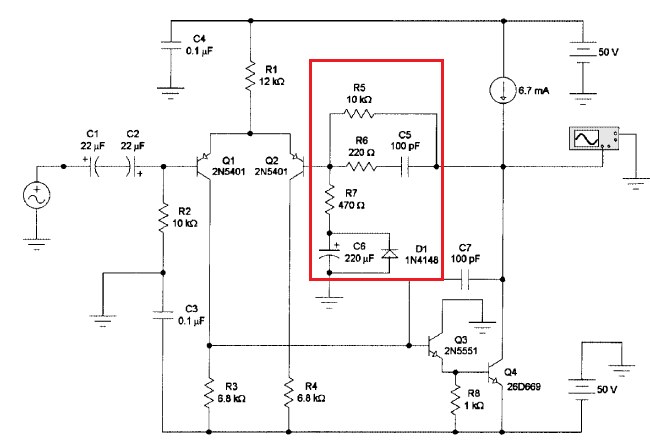 I'm also going to ignore C7, the compensation capacitor, which is very important but can be thought about later/separately.

I'm not looking to do the full analysis here, but the small signal resistance looking into the inputs is about \$\beta R1\$, the output resistance is about 15k (and is proportional to the Early voltage of Q4), and the differential gain \$A_{diff} \approx 15\cdot\beta\$ (also going to ignore the common-mode gain for now).

So then we can replace this with an equivalent looking like this: 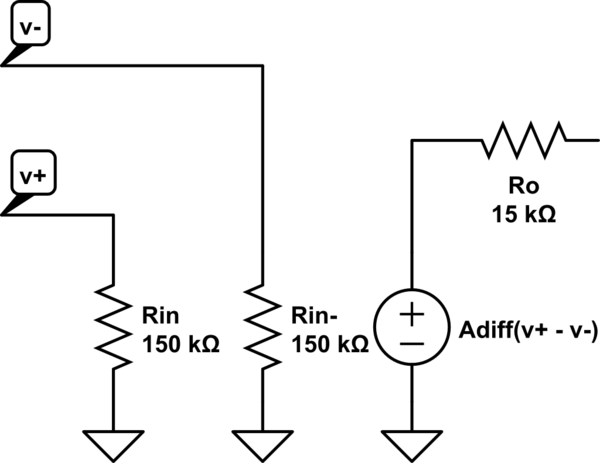 So what's the problem with this amplifier? It has a very high gain of about 1500, it has a pretty high input resistance of 150k. The problem is that its properties are very dependent on the transistors. A transistor with a β=200 when cold might have a β=50 when hot. A batch of transistors will have large variations in β. You wouldn't want, for example, your speakers to be four times louder on a hot day than on a cold day. 1500 (or 3000, or 750, depending on β) is also a lot of gain. Also the output resistance is kind of high at 15k.

Now that we have a simpler model, let's add the feedback loop back in. I'm going to assume that at the frequency we're interested in, C5 is an open circuit and C6 is a short circuit. 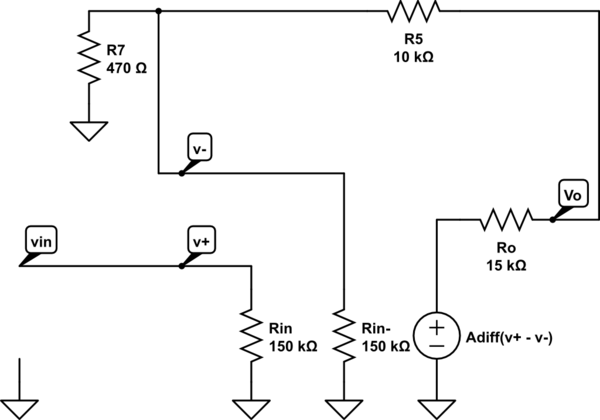 All we added here is a voltage divider. Since Rin=150k is so much larger than R7 that it is in parallel with, we can ignore it. So,

so finally we have

Then move Vo to the left side,

and solve for Vo

This doesn't contain Adiff at all! Remember Adiff was heavily dependent on beta, which would have caused the amplifier to have very inconsistent properties. So by introducing feedback we've made the gain dependent almost exclusively on the value of some resistors, which can be very consistent.

Now I only talked about gain here, but the same applies to distortion. Consider if the amplifier had an open-loop gain of 1000 for Vo=0V and 2000 for Vo=5V. A signal large enough to go through both points would be distorted as the parts above Vo=5V would be amplified only half as much. With the negative feedback, the closed-loop gain would change very little as Vo went above 5V, it would still be approximately 1+R5/R7.

The factor by which this is reduced is how much larger \$A_{diff}\frac{\mathit{R7}}{\mathit{R5}+\mathit{R7}}\$ was than 1 when we decided to ignore the 1 term (and the output resistance term though we can come back to that). This is the open loop gain divided by the closed loop gain.

Not the answer you're looking for? Browse other questions tagged bjt feedback diff-amp distortion or ask your own question.

0
Generating a high speed single-ended voltage output from differential currents
7
Would this JFET+op-amp circuit work?
0
Differential Amplifier with Global Negative Feedback
10
Another Failed Differential Amplifier
0
Distortion Elimination with Differential Transistor Pair
5
Phase shift near saturation mitigation in input stage amplifier — How does this work, why does this work?
3
What do these components of an AB amplifier do?
2
What “was” input resistance of this voltage-voltage topology amplifier before feedback?
0
Emitter Follower / Common Collector as Negative Feedback Amplifier