I'm designing my first PCB in Eagle. This PCB is for surface mount LEDs (Epistar 1-3W) and has 5 independent channels. There is an input from my driver circuit and an output for daisy-chaining more LED PCBs. I'll use this to provide different light treatments to plant cell cultures growing in bioreactors.

The traces are 1.27mm to accommodate a max current of ~2A (http://www.4pcb.com/trace-width-calculator.html)

Notice that I haven't included the driver circuit. Each channel of LEDs has its own driver (see 5 separate VCC and GND lines on the schematic). I've also omitted a bridge that will connect + to GND for each channel on the last PCB in the daisy chain (visible in the schematic but not the board).

Edit 2 Here's my updated design. Changes: (1) Adjusted the trace spacing to 20mil (TY Mishyoshi)(2) Added holes under each LED as heatsinks, if this is insufficient I'll move to a 3 layer board with a copper plane (3) increased the size of the pads for the LEDs (4) added 5mm length on each side of the board to facilitate mounting in our bioreactors

Thanks for your input!

This is not a complete review, but let's start with the obvious. In cyan, you have silk-to-solder issue. (It is silkscreen, isn't it?) If your silk to solder spacing is wrong, your silkscreen may not render correctly. Not a big issue, but hey...

In pink, your have traces that look shorted. Even if they are not, they probably don't have enough spacing. This is trace-to-trace spacing. While it is possible to go as low as 2 mils for very high-end PCBs, you probably will produce this with a cheap PCB manufacturer. As such, you should follow their DFM rules. Usually, they ask for 8 mils (source: iteadstudio). This is their maximum. If you can take larger, you will have better yield (less scraped board in large production). At work, we use 20 mils even will reputable manufacturer when we can. It is not always possible, but for your board it looks possible, so you should do it.

In yellow, you have trace-to-hole clearance issues. Again, check with your manufacturer; if you can afford it, take as much spacing as you can. 20 mils is not luxury if you can have that much spacing around your traces.

Your component-to-board clearance looks very tight. You should have a minimum of 50 mils so that V-groove or whatever tool you plan using for cutting those boards won't rip away your trace/pads.

From a current standpoint, it is ok to check for trace current, but that is not the only specification: * What is the temperature elevation you can tolerate? * What is the voltage drop that you can tolerate. A lot of current on a small trace will cause some voltage drop. You might adjust your circuit, but this is worth mentioning. * What is current that must pass through your vias? The vias must be able to pass all that current too.

Now some people talked about a ground plane. You might need one to reduce EMI if your LEDs are driven using a PWM (switching LED driver). A plane will also help balance cooper on your board for etching process and reduce costs when doing production (less etchant used, better yield, faster etching, etc.). That plane may also have another use, which is probably the most important for your design: dissipate heat. You have 25x 1-3W LEDs that must dissipate heat. If you have a plane, the cooper will dissipate the heat away. If you don't, your LEDs must dissipate that heat themselves using their junction to air interface. This may reduce you maximum light output or your LEDs' maximum lifetime if you don't care about this.

If you use a ground/power plane, make sure to have thermal relief on your pad to plane connections to ease soldering.

You have no mounting holes. Is this expected?

You seem to have no silkscreen designators on your LEDs or connectors. This is bad from a debugging and orientation point of view. What is top and what is bottom? What is left, what is right? Can you assemble this thing without even having to think about this?

For the past few years I've been working with the University of Florida's Horticulture Dept. helping them with their research projects where they use LEDs.

LEDs are all about thermal management. You have none.

Another issue you may have, that most LED designs do not have, is multiple colors at multiple adjustable currents. Using a different current for each channel is the biggest issue.

Five LEDs in a string is an odd number. You have to think about the power supply. What supply voltage will you use? You need at least 16V for these maybe 20V depending on the driver used.

More LEDs per sting running a a lower current are easier to thermally manage.

Unless you want to design your own driver you should consider using a Mean Well HLG-40H-54B and increase the number of LEDs to 16, or 21 for red. You will see that you will not get very much light from your board as is. The big problem being the lack of thermal management. The easiest way to remedy that is to use more LEDs driven with less current. You could use a HLG-40H-36B to drive 10 LEDs. I assume you need to adjust the output with some precision. The HLG type B gives you total control of the dimming with a resistor, potentiometer, PWM, or a DC voltage from 0-10V.

If quality of the dimming is an issue or you need more than 350mA (doubtful) the Infineon Technologies 1.5 Amp eval board EVALLED-ILD6150 is a very good driver at $17 each. The LDD modules do a very good job.

What ever you do, do NOT drive the strings in parallel without a balancing circuit (e.g. LM3466). Use one driver per string.

You could use a single power supply and a buck step down constant current regulator with a current adjustment (dimmer) to drive each string.

For the PCB. it is best to try and keep the tracks all on one side of the PCB minimizing the number of vias and gives you the option of MCPCBs. You could route the LED tracks along the sides of the board. Save the other side of the PCB for power, ground, and thermal management. Better yet do not put the daisy chain power tracks on the board.

I have a PCB I am currently working on that has 4 strings of 16 LEDs on a PCB that is 9mm wide. All LEDs tracks (15mil/.381mm) are on the bottom side. The footprint includes a via for anode and cathode. One footprint for each string. Footprints accommodate both Cree and OSRAM. The center pad is the thermal pad.

With four strings per strip I can mount two strips to a single heatsink and I can have up to 8 channels per strip. The heatsink double as the fixtures frame. If I need a lot of photons (e.g. cannabis) I can use copper water pipe as the heatsink and water cool them very inexpensively.

They can be routed on one side.

Use 2oz copper, it costs no more than 1 oz. unless you are going bare bones.

I used strips attached to a heatsink rather than a larger PCB. On a board like yours the inner LEDs are difficult to keep cool. And the spacing between the LEDs was wasted real estate. When I started with UF they had some larger boards (550mm x 100mm) with 6 channels of 3 LEDs with a separate driver for each channel.

This board could handle about 300mA with out the two fans running. At 300mA we could easily get 300 µmol/m²/s at a height of 400mm. This is a two sided FR4 where the bottom side is almost all copper used for free convection cooling. I think that is a lot of wasted real estate.

On my first LED strip I too put power tracks for daisy chaining. I do not do that any more. It's best left to wires to do that. Just wastes PCB real estate and the connectors got in the way. Never used them.

I used thermal vias on a FR4 rather than using a metal core PCB. I followed Cree and Lumiled's suggestions for PCB layout using copper to dissipate the heat without a heatsink. From the table of temperatures (below) you can see it did very little good.

The large pad is the thermal pad for the Rebel LEDs.

This is what 1 Amp with no thermal management looks like. I tried to skimp on the number of holes I had to drill in the heatsink. The board was not touching the heatsink under these two LEDs. 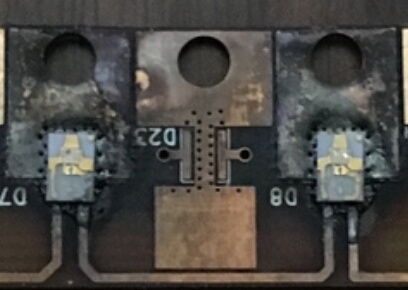 These cheap "Epistar" are usually not made by Epistar but other less reliable suppliers. The datasheets suck for these cheap Chinese LEDs. The datasheets I've seen specify a max temperature of 55°C where top tier LEDs are more like 150°C.

Below is a table of measured temperature and current for Lumiled Rebel ES LEDs. Without significant thermal management you may be able to run them with 200mA max before they over heat. See highlighted rows. The PPFD column is µmol/m²/s and this is for a strip of 16 Rebel White LEDs at a distance of 12-18 inches. The highest efficiency LEDs (e.g. Cree XP-G3 Royal Blue) have a max PFD of 2.77 µmol/s @ 350mA. 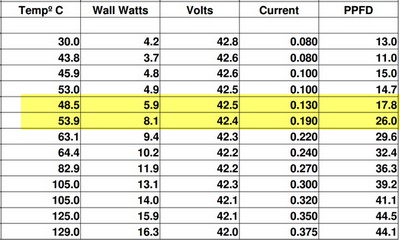 I do not know how many µmols you need, for tissues I assume no more than 150 µmol/m²/s. You might get that if the distance to this board was 50mm or so.

Do NOT use these cheap Chinese LEDs. They will be very problematic. You need uniformity and you will not get it from these LEDs.

If you are going to write a paper on your experiments it's possible no one will be able to validate your results becasue of the variance in the performance of these types of LEDs.

When evaluating LEDs thermal resistance of the package is very important.

The "Epiled" LEDs generate more watts of heat than light.

If using blue red or other color LEDs, I would suggest using OSRAM Olson SSL 150 LEDs spaced about 20-25mm between LEDs. If white Cree XP-G3. These get up to 700mW of photons for each watt of electricity.

3W LEDs need adequate cooling. I don't see any thermal management here. The LEDs will burn rather quickly. They could last a few seconds.

Considering the power density, this needs a metal core PCB (MCPCB) backed by a heat sink of adequate performance.

Not the answer you're looking for? Browse other questions tagged led pcb review or ask your own question.