I'm trying to design a common-emitter amplifier with a gain of 25. I seem to have gotten the correct gain by guessing with my resistor values. Can anyone tell me how to calculate resistor values and verify that I am indeed getting a gain of magnitude 25? 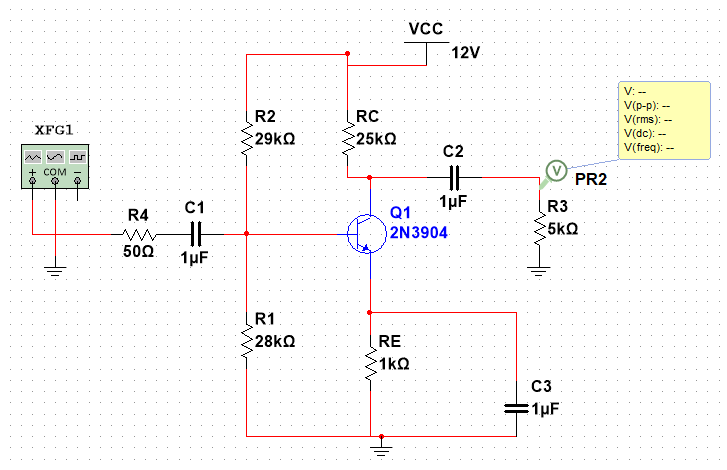 To get more accurate you should include the dynamic emitter impedance, which at room temperature is about 1/(40*IC) where IC is the collector bias current.

Over temperature re = VT/IC where VT=kTq K is Boltzmann's constant, q is the charge of an electron, T is temperature. Then your gain is Rc/(re+RE).

So making sure that your physical Re is >> re will make sure your gain is constant over temperature and shifts in bias due to signal. (Which can cause non-linear distortion.)

Of course if you bypass the emitter resistor then above the breakpoint your gain will increase to Rc/re in the limit, until other parasitics come into play.

The advantage of bypassing the emitter resistor is more gain, but with a more stable DC operating point.

You can remove the 1uF bypass capacitor to get a precise and temperature Independent and more stable gain.

Because in your case(with the 1uF cap) the gain is just Rc/re that's because the 1uf cap shorts the emitter resistor Re at the signal frequency.

Since re depends on many parameters like temperature and collector current(which can change by varying R1 and R2) it's difficult to get the exact gain you desire.

But with the 1uf removed the gain is Rc/(re + Re).And because of Re>>re(hundreds Of ohms compared to tens of ohms) the gain can be simplified to just Rc/Re.

Now as you can see the gain is much less dependent on temperature or collector current by a factor equals re/(re + Re).

Another problem that rises due to the bypassing of Re is the distortion of the output signal when large swings about the Quiescent point occur(The amplifier is not perfectly linear) and this can be solved by removing the bypass capacitor.

The transistor is biased wrongly. Its base voltage is much too high for the 25k to 1k ratio of the collector and emitter resistors. Therefore this transistor is saturated and is not amplifying.

Not the answer you're looking for? Browse other questions tagged transistors amplifier common-emitter or ask your own question.