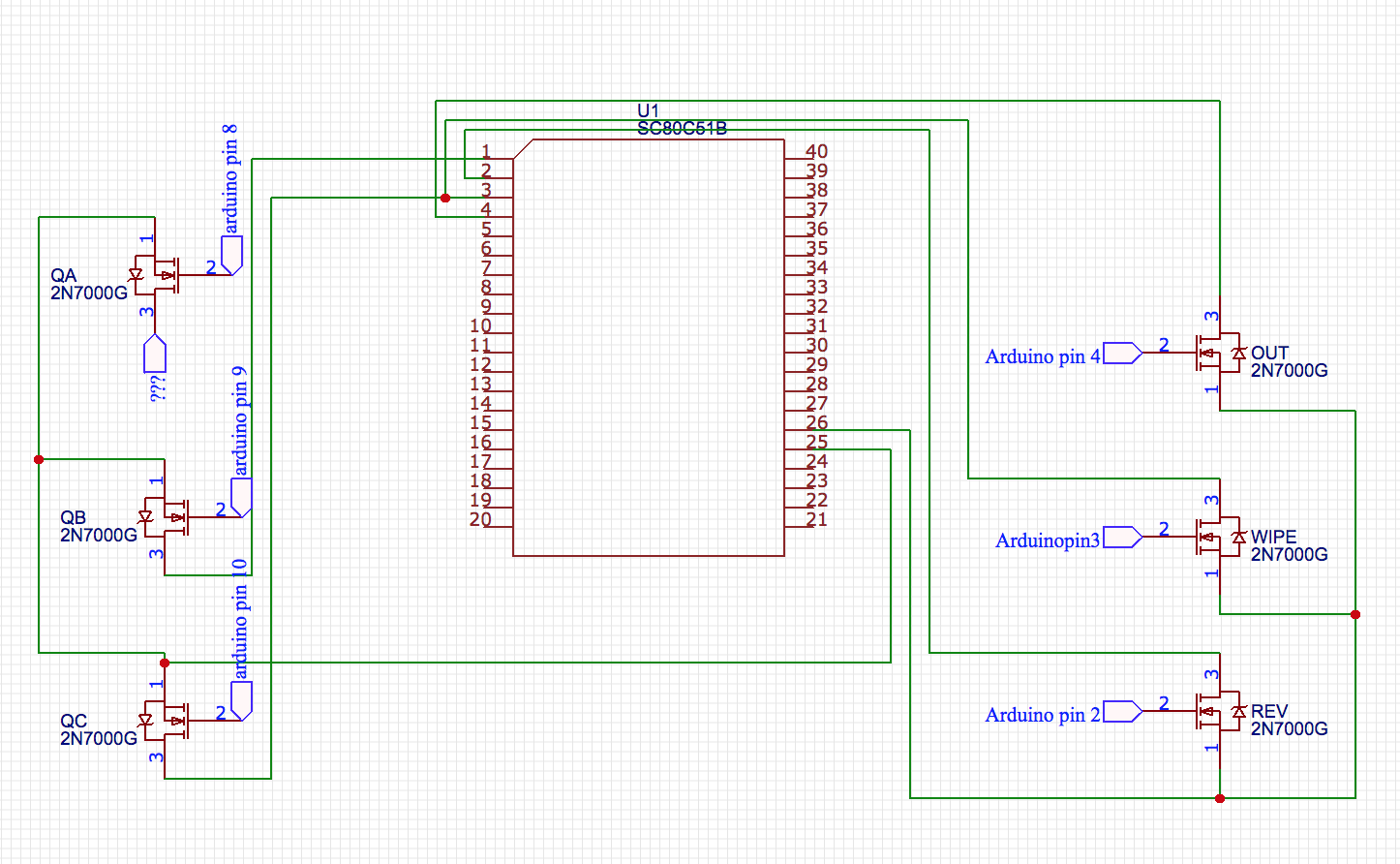 So I've found a basic composite video "synth" which I'm trying to manipulate with an arduino. The device was originally controlled by NO tact switches between pins on the CMOS MCU, a Signetics SC80C51B (datasheet below).

I've replaced some of the tact buttons with 2N7000G N-channel signal mosfets, which are driven directly from the pins of the arduino UNO (5v).

So far, I've had some success. The arduino can reliably emulate most of the buttons by sending a momentary (~10ms) HIGH to the gates of the fets. However, some of the buttons behave erratically, triggering other buttons, even those which have not been replaced by mosfets.

Unfortunately, I don't have a digital scope to capture any of the pulses and investigate further. I suppose I'm just hoping that someone can explain to me how I can better interface with the Signetics chip, or how to better emulate the button presses.

I've attatched a photo of the pins as they're hooked up. FETS A, B, C, and "OUT" all work correctly, "REV" and "WIPE" trigger other buttons as well as themselves. FET A's drain does not pass a continuity test between any of the pins on the MCU, but works correctly, don't know what to make of that.

So the buttons were multiplexed. I identified the multiplexing outputs, and discovered that these signals went from -5v pulses to -1v pulses whenever the arduino was connected to the gates of the MOSFETs, even if it wasn't powered on. While I didn't discover why this was the case or why it caused "random" button presses, I managed to solve the problem by putting 1N4148 Schottkey diodes between the digital pins of the arduino and the gates of the MOSFETs. Now the mosfets behave as individual "buttons" and do not trigger unwanted events. Thanks for all the help.

edit: if anyone finds this as they're trying to olve a similar issue, feel free to message me and I can give you a full schematic of my solution.

Not the answer you're looking for? Browse other questions tagged arduino mosfet cmos or ask your own question.

9
Debugging a 16x2 LCD Display on an Arduino
6
How to control Arduino frequency?
5
Choosing a MOSFET for solenoid control via Arduino
2
Multipurpose momentary button - microcontroller/arduino - Which mosfet to use?
0
Control one mosfet with 2 PWM signal sources
1
Switchover between two power supplies using FETs
4
2N7000 Mosfet destroyed during soldering?
0
Why would my mosfet driver output 1v when not triggered?
0
Trying to read the data from an ASK RF transmitter
2
AC MOSFET Switch