I have some past electronics education but have not used in over 30 years. I am trying to make a circuit which uses two normally open tact switches and a dpdt single coil latching relay. I have a circuit that one button is forward and the second reverses the motor. When I wired it up it would start in one direction and stop with the press of the second switch, which actually works great for my need. The problem is I cannot find the mistake I made when wiring it that allowed it to stop instead of reversing. I actually want to replicate the mistake (I have tried to trace the circuit and cannot find the problem, but it works just right for my device), or find a similar circuit that will allow me to push one button, the motor starts and continues until the second switch is pressed and then stops. Any suggestions would be helpful as my knowledge is very rusty and I thought the circuit I had would work. I am on a tight constraint as a client has decided on an electrical or electronic configuration for a project that originally was supposed to be manual. Greatly appreciate any help. 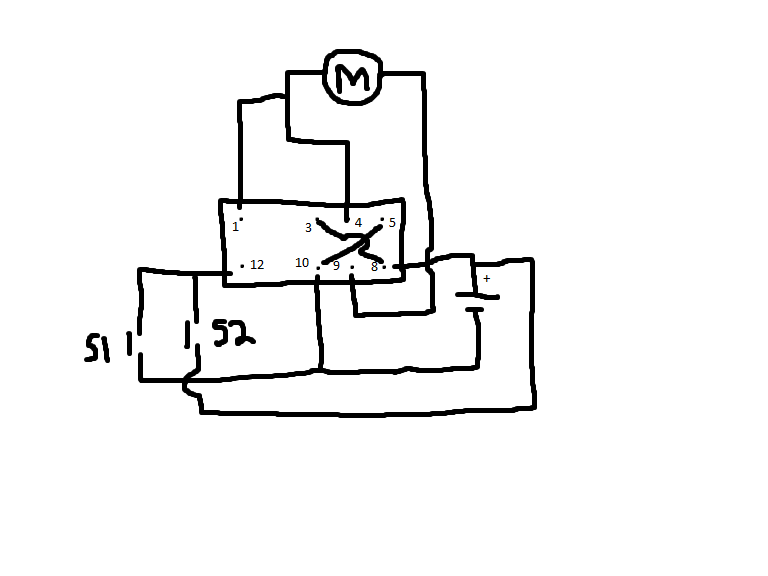 It looks like you are using the DPDT relay as a reversing switch. Wire the contacts to the motor and the power source. If you add a SPST toggle switch, that would be the main power ON-OFF switch.
Now you just have to control the relay. Relay ON for one direction, and relay OFF for the other direction. A second SPST switch could be the forward/reverse switch.
Or instead of 2 switches you can use a single center-OFF, DPDT toggle switch. One set of switch contacts turn on the motor circuit, while the other set of contacts determine if the relay is ON or OFF. Do you need a schematic for one option or the other.

1
limit switches to control motor direction
0
What kind of time delay switch to choose to reverse motor for just a couple of seconds
3
Change Direction of 12v DC Motor Rotation using Relay
2
Motor Speed Controller Causing Relay to Lose Voltage and Stop Working
1
Self Latching Relay
0
One pulse to ON/OFF bistable latching relay
2
How to wire a Rpi, a relay, a DPDT and a PWM module to a DC motor, allowing to control its direction and speed?
0
How can I get my latching relay to switch