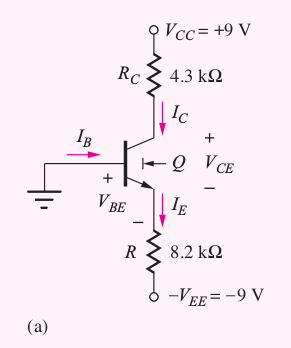 I don't agree with the discussion they make. 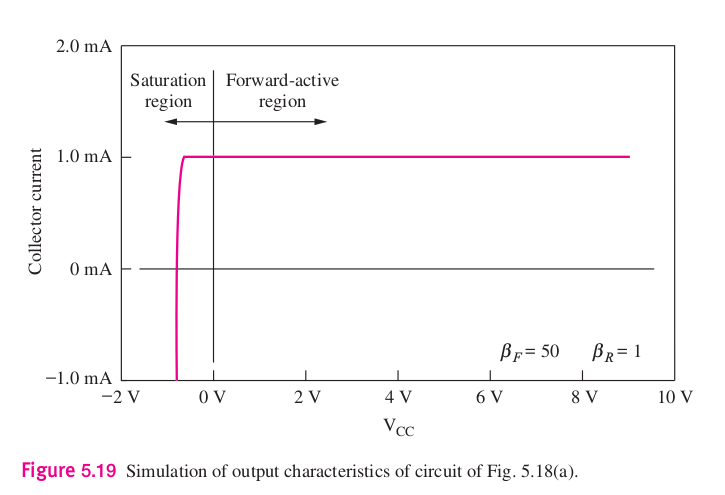 Figure 5.19 displays the results of simulation of the collector current of the transistor in Fig. 5.18 versus the supply voltage V CC . For V CC > 0, the collector-base junction will be reverse-biased, and the transistor will be in the forward-active region. In this region, the circuit behaves essentially as a 1-mA ideal current source in which the output current is independent of V CC . Note that the circuit actually behaves as a current source for V CC down to approximately −0.5 V. By the definitions in Table 5.2, the transistor enters saturation for V CC < 0, but the transistor does not actually enter heavy saturation until the base-collector junction begins to conduct for V BC ≥ +0.5 V

Why does the fact Vcc > 0 automatically implies reverse bias on collector base junction? What if Ic is sufficiently large to produce a voltage drop (on the resistor) bigger than Vcc? In this case the collector base junction will be forward biased, so that the saturation region starts at Vcc clearly different from 0...

In fact, it is essentially what happens if I try to reproduce in SPICE simulation the circuit.. the dark blue line represents Ic which strangely doesn't agree with Fig 5.19! 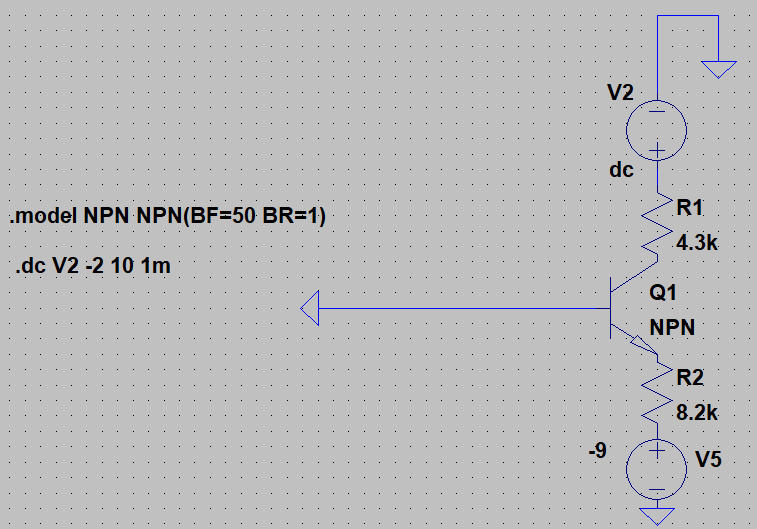 I'm a beginner in electronics and SPICE, so I'd like to know where I am wrong.

Actually you are right. The text in the book has an error. There is written Vcc instead of Vce. Vcc must be more than 3,8V to make the Vce > 0 and the transistor to be fully active.

I must admit that I also thought wrongly the working of the circuit in my previous answer version. I did a DC sweep simulation. I placed GND to the emitter to get Vce easily without math, Vce= V(NODE1) 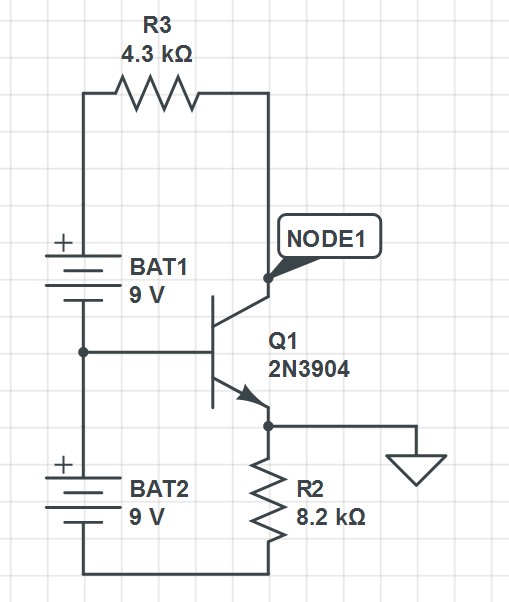 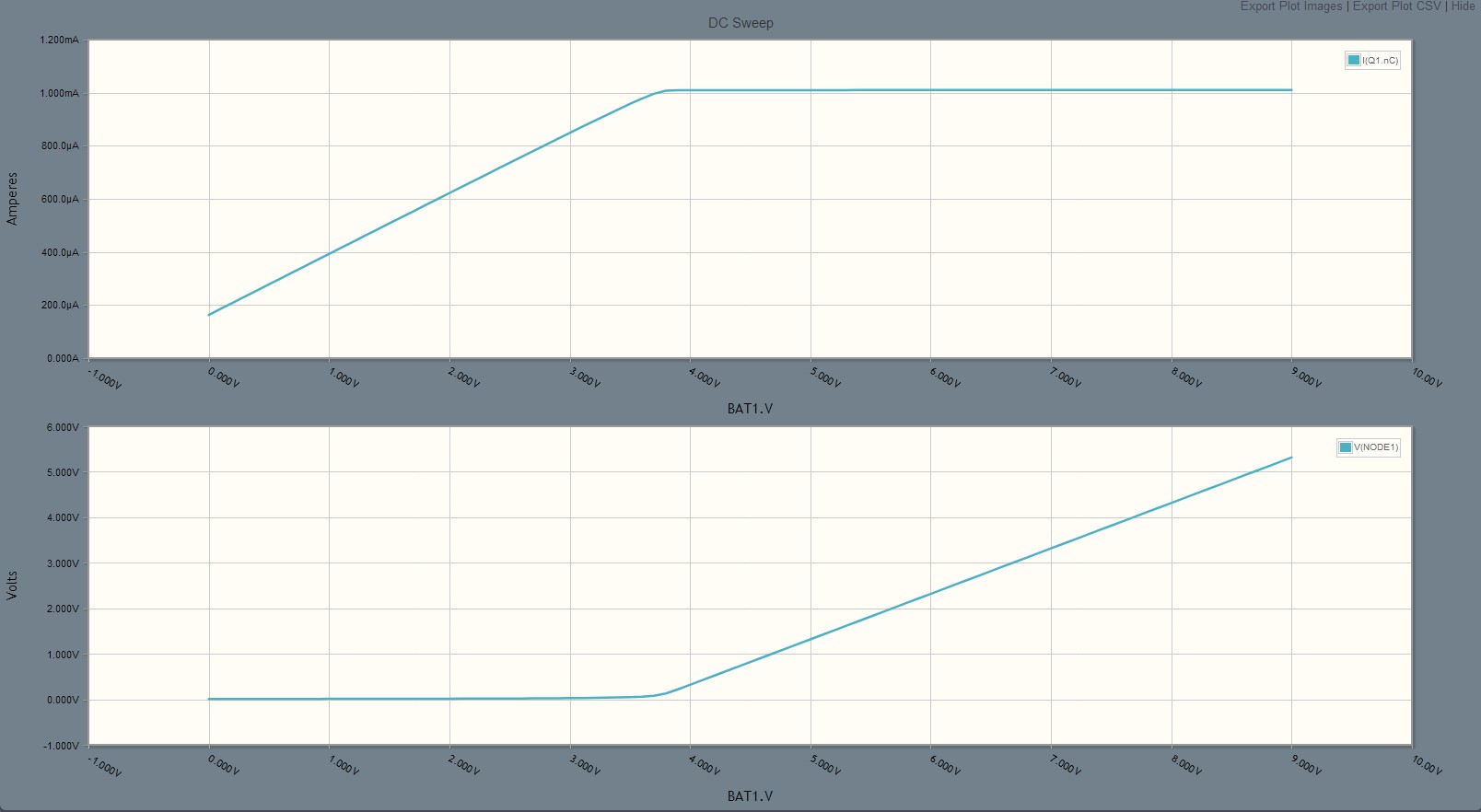 The voltage of BAT1 goes from 0 to +9V. Vce does not go negative at all. The proper function of the transistor needs Vce > the saturation limit which is about +200mV in this case.

Your question: "What if Ic is sufficiently large to produce a voltage drop (on the resistor) bigger than Vcc?"

This is impossible. Using the given DC supply values (+- 9V) a voltage drop larger than Vcc would make the emitter potential positiv. In this case, the B-E pn junction is not positively biased and the transistr would be off. Hence, no current. That means: Your primary assumption (large Ic) is obsolete.

You should (a) know the "secrets of negative feedback (caused by R2) and (b) realize that such a negative DC feedback allows an automatic Ic adjustment because there are two equations (rules) which must befulfilled:

(1) Ohms law for R2 and (2) Shockleys exponenrtial equation describing the Voltage-current relation across the B-E junctin.

Finally, for Vcc>0 one of the preconditions for using the BJT as an amplifier is met (C-B junction reverse-biased). The second condition (B-E junction forward-biased) is also met because the base potential (zero) is always larger than the negative collector potential.

For \$V_{CC} \gt 0\$, the collector-base junction will be reverse-biased, and the transistor will be in the forward-active region.

Let's start here. To understand this point, you need to see a few details.

Since the statement is talking only about the case where \$V_{CC} \gt 0\:\textrm{V}\$, this is also by definition more positive than the base. Not more negative.

Think of this as a simpler question:

I've intentionally left the base-emitter diode unconnected here, so that you will ignore it for now. Just look at the remaining circuit. If \$V_{CC} \le 0\:\textrm{V}\$ then the BC diode is forward biased to some degree and a current can flow through \$R_C\$. But if \$V_{CC} \gt 0\:\textrm{V}\$, then the BC diode must be reverse biased. So that part of the statement, the part saying "the collector-base junction will be reverse-biased," would appear to be on its face correct from this highly simplified perspective.

Of course, you now argue that, "Yes, I agree so far. But also, there is a collector current that cannot be explained by that simplistic schematic. And this collector current might appear to be any value at all. So this would mean that your example is useless."

Good point. My counter to that is that the collector current cannot be any current. That current is limited to a maximum determined roughly by \$I_{C_{MAX}}\approx \frac{V_{CC}}{R_C}\$. So let's see why.

We can change the current in the emitter by changing the value of \$R\$. The BJT is in a mode of being an emitter follower and so the emitter current will be determined by:

You'll note here that \$R_C\$ doesn't show up here. So it would appear that the emitter current can be set arbitrarily. "Doesn't this mean that we can make the collector current any value we want, then?" And the answer is "NO, you cannot do that."

"So where does the emitter current go to or come from, then?", you ask.

"The difference appears at the base," I reply.

As you lower the value of \$R\$, and while the BJT is in its active and not saturated mode, the collector current increases just as you'd expect. But at some point determined by your choice of values for \$R_C\$ the voltage drop across \$R_C\$ gets very close to the point of forward-biasing the BC junction. Right at the point where \$V_{BC}=0\:\textrm{V}\$, the BC diode remains reverse-biased, just as the text says it does. But if you now continue to increase the collector current by decreasing \$R\$ still further (or, alternately, try to increase the voltage drop across \$R_C\$ by increasing its value), you will just start the very, very early stages of forward-biasing the BC junction. The moment you do that, is the moment that the BC junction just begins to conduct some forward current from the base.

Think closely about that. As you increase the voltage drop across \$R_C\$ sufficiently to begin to forward-bias the BC junction, the base must now begin to supply an additional current for that newly forward-biased junction. This added base current does not increase the collector current but does become part of the emitter current.

Remember, every \$60\:\textrm{mV}\$ increase in the forward biasing of a BJT diode will increase the current through it by about a factor of 10. So even small changes in the forward-biased voltage of BC yield huge changes in the base current needed. Very, very quickly the BJT goes into deep saturation and the base starts pulling very large currents.

For your Spice simulations, just take note of the base currents as well as the other two currents. If you see the BC junction going into a forward-biased situation, then this also means you should start to see an increasing percentage of the emitter current as coming from the base and not the collector. Before that point, you should be a roughly constant relationship between base and collector currents. (Or, put another way, you should see \$\beta=\frac{I_C}{I_B}\$ declining as the BC junction becomes increasingly forward-biased.)

Not the answer you're looking for? Browse other questions tagged bjt spice saturation or ask your own question.

5
Current through the reverse biased junction in transistor
3
NPN transistor circuit connection, what determines which region it is at?
5
Why can current flow through the reverse biased base-collector junction (N-P junction) in a BJT with a forward biased base-emitter junction?
1
Common emitter characteristics in the saturation region
2
Bipolar transistor as a switch
1
How is this BJT in saturation?
1
Why does the collector current direction remain the same in saturation and active region?
0
Common base circuit with zero supply voltage
0
How is the Collector-Base region reverse biased in Common Collector configuration of BJT?