How to simulate analogue output sensor with MCP3008 ADC. Can I use a 10K potentiometer with Raspberry Pi 3.3v? 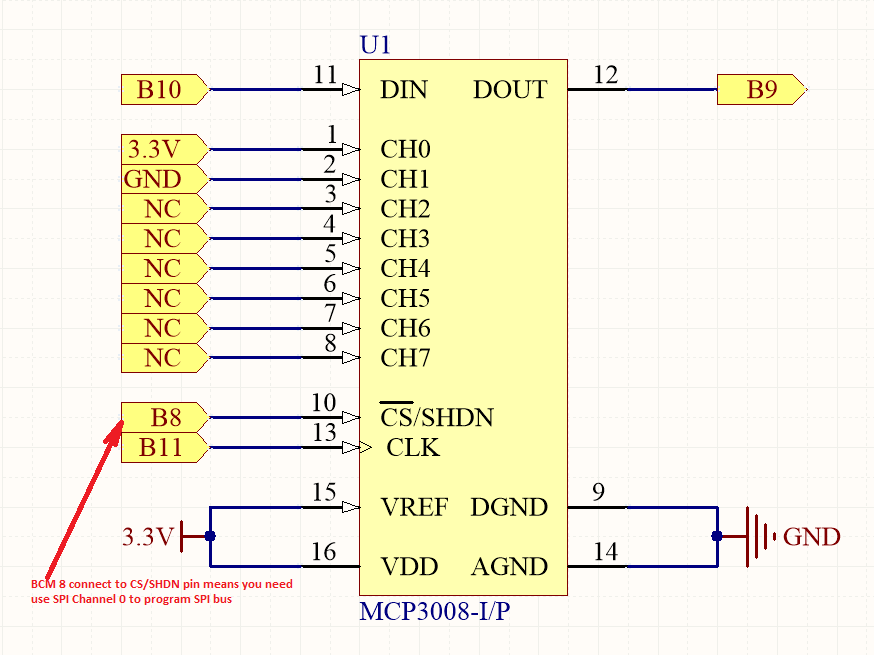 What I would like to do is to be able to vary the input to the MCP3008 ADC to simulate a sensor such as an analogue temperature sensor.

I was wondering if I could do this by adding a 10K ohm potentiometer in connection between the 3.3v rail and CH0 of the MCP3008 ADC?

After adding in the potentiometer, connecting the wiper output to CH2, and looking at the numbers change as I changed the knob setting, I then modified the circuit by adding an LED to GPIO #18, the hardware PWM pin.

So the modified application used a loop to query the relative voltage level, 0 to 1023, from the MCP3008 on the channel to which the potentiometer was connected, CH2. The value was then used to set the Duty Cycle of the GPIO #18 pin which was provisioned as Pulse Width Modulation (PWM) with the default range of 1024. Changing the Duty Cycle in turn changed the illumination level of the LED. So as the knob on the potentiometer was twisted to a new setting, the LED brightness level changed.

Addendum: Use photo-resistor with MCP3008 as alternative 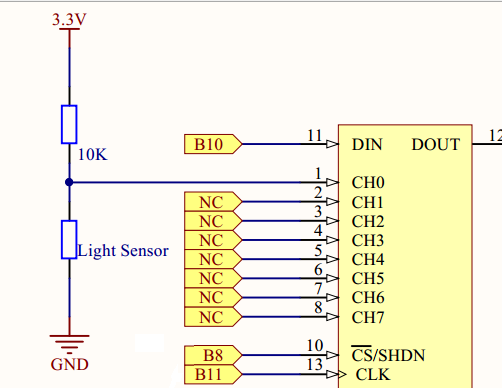 Here is a nice tutorial and explanation of the MCP3008 and how to interface to it with SPI. Interfacing an SPI ADC (MCP3008) chip to the Raspberry Pi using C++ (spidev).

Yes, you can use a pot to provide a variable input to the ADC.

Connect one end of the pot to +3.3V, the other end to Ground, and the wiper to the input of the ADC. As you turn the pot, the voltage at the wiper will vary between 0 and 3.3 V.

To be engineeringly accurate, there is one caveat. The MCP3008 is a plain successive-approximation ADC with naked sample-and-hold (S/H) unit on front end. The S/H unit has 1k series resistance and 20 pF hold capacitor, see Figure 4.1 of the datasheet. This is a fairly low input impedance, and it needs to be considered when sampling relatively high-impedance sources. The chip doesn't have any analog buffers that would allow a high-impedance source to drive this S/H circuit with good accuracy.

The issue is that the 10k source impedance is on the borderline. When the S/H switch engages, the source will try to charge the cap, and the voltage will have a dip. The resulting ADC code might be slightly less than the source voltage DC level. The error will depend on rate of conversion.

The bottom line is that if you want just to see your output code changing and test your software behavior, the 10k trimpot is fine. However, if you need some real accuracy in conversion, with a real sensor, you need to use low-impedance source, at most of about 1k or less, or use a buffer amplifier in front of this ADC. See Figure 4-2 for the relationship between conversion error and source impedance at different conversion rates.

Not the answer you're looking for? Browse other questions tagged adc raspberry-pi signal potentiometer or ask your own question.

5
Solar power monitoring with Raspberry Pi
0
Voltage divider not functioning correctly
0
Calculate base resistor of PNP transistor in switching circuit with variable resistance
7
Using a digital potentiometer in a voltage divider
0
Raspberry Pi driving a LED through a MOSFET
1
10K Potentiometer with Arduino Uno and 5v works but same pot with ESP32 and 3.3v floating values
0
Use LMT86 temperature sensor with MCP3008 ADC
0
SAR ADC of Nucleo board changes conversion result to a wrong one randomly