Can a thyristor be built from two transistors?

If that's the case..

When a circuit calls for a SCR/thyristor, and there isn't one available, can it be substituted by (i.e. crafted from) two BJTs (or other discrete components, for that matter)?

Here are a couple of examples I had in mind; anode = blue, gate = green, cathode = orange: 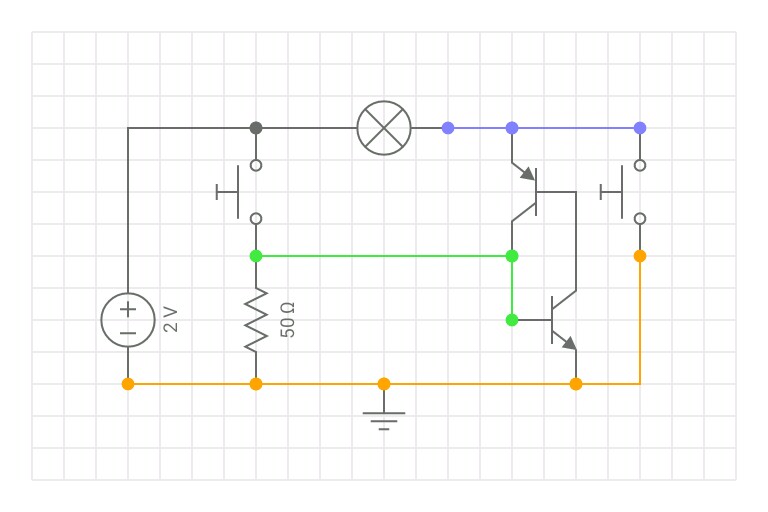 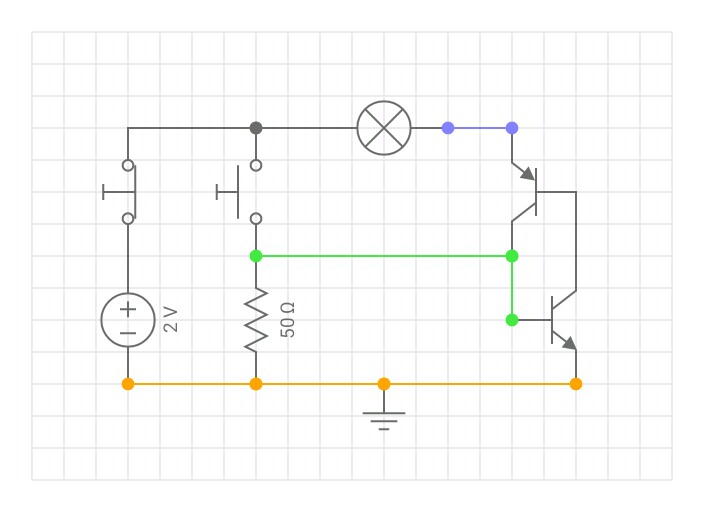 There are two easy kinds of thyristors made out of two BJTs. One is the SCR and the other is a PUJT. (The PUJT will use the base of \$Q_2\$ instead of the base of \$Q_1\$ as the gate -- see circuits below.) But the main problems I encountered in making one of these work out of discrete parts is that you need to hand-select BJTs to make this work. Otherwise, nothing good comes of it and it is very, very frustrating. So the left-side schematic shown below is mostly impractical. So don't even bother. 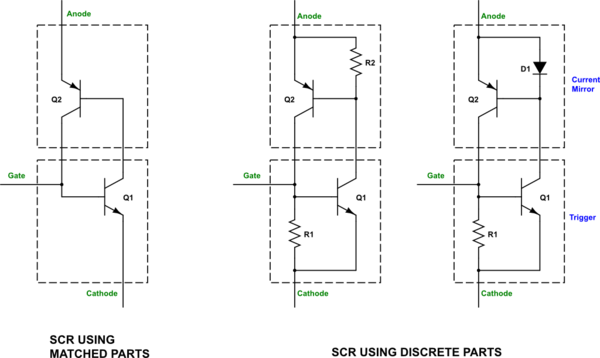 Some added components can make things work well. Spehro's circuit, I think, represents additions I'd made before to work with actual parts. (See the middle circuit.) The idea is that \$R_1\$ holds \$Q_1\$ off and \$R_2\$ also holds \$Q_2\$ off until something happens. By supplying some current via the gate input, more of this current passes through \$R_1\$ at first but as the current is increased it eventually reaches sufficient voltage drop across \$R_1\$ that \$Q_1\$'s collector manages to pull down enough on the base of \$Q_2\$ (also held off for a bit by \$R_2\$ at first) to turn \$Q_2\$ on. When \$Q_2\$ is on, it's collector supplies a lot more current and is quite able to pull up on the base of \$Q_1\$ without the gate current being supplied anymore. So the two BJTs now supply each other's base currents and the "SCR fires," so to speak.

The problem with this circuit is that the two BJTs become very, very highly saturated. So if you look at the entire SCR anode-to-cathode current and ask how it flows, you realize that the anode current goes through \$Q_2\$'s emitter and then splits in about half (\$\beta=1\$) so that half of it goes through the base-emitter junction of \$Q_2\$ and about half through its collector. Similar logic applies to \$Q_1\$'s emitter current, too. The upshot here is that the voltage drop across the device must be the sum of a very saturated \$V_{CE}\$ plus a super-high-current driven base-emitter diode junction whose voltage drop depends almost entirely on the amount of current you want to drive through the device. And since this can be quite high, you can easily wind up with voltage drops exceeding a volt and perhaps even 1.5 volts.

A response to this is to come up with a way to reduce the needed base currents so that the voltage drop across the BE junctions can be similarly reduced.

One fix to this problem is to redesign the upper section to allow a better division of the SCR current so that more of it flows through the collector of \$Q_1\$. Using a diode like a 1N4148 achieves this. (See the right-most circuit above.)

This diode is essentially just a diode-connected BJT -- with an important difference. The saturation current for typical diodes is much higher than it is for small signal BJTs. (And they can carry a fair current, too.) This means that they conduct a fair bit more current through them for the same voltage across them. In effect, this makes for a current mirror with a current gain that is very much less than 1. How much less, exactly, doesn't really matter because ANY improvement here helps to reduce the voltage drop across the entire circuit. So it's all to the good. Different diodes with some different saturation currents will yield different results. But pretty much any diode you can put hands on will have higher saturation currents than most BJTs you might apply. So it "just works," usually.

So what happens? Well, the same process applies to the trigger current. You need to supply some current into the gate. But now as the collector of \$Q_1\$ pulls current from the "current mirror" above it, most of that current will come by way of the diode. (But since this isn't a resistor, the developed voltage isn't linearly related to the current, so the voltage across the diode raises up by perhaps a hundred millivolts per decade change in current.) This will develop a voltage across the diode, which gets applied to the base-emitter junction of \$Q_2\$. However, \$Q_2\$'s collector current will be nothing nearly as much here as the diode current, so most of the total SCR current now diverts through the collector of \$Q_1\$ with only a much smaller (but still quite adequate) collector current in \$Q_2\$.

This collector current in \$Q_2\$ is still way more than enough to pull \$Q_1\$ fully on. But now it's only a small portion of the SCR current, most of which is passing through the diode and the collector of \$Q_1\$. This means that the \$V_{BE}\$ of each BJT is lower. And this means also that the total voltage drop across the entire circuit can be less (by some margin.) Depending on the exact resistor value for \$R_1\$ and the desired peak currents through the circuit, you can make a much better performing overall "device" this way.

By proper selection of the diode (not hard, actually), you can arrange things so that the BJTs operate at a somewhat higher saturated \$\beta\$, which improves the voltage drop while still performing the desired function.

You can also apply a small resistor in series with the diode to degrade the effective \$\beta\$ in \$Q_1\$. (But at some point you lose all benefits of the diode if the value is too large.) Or use a small resistor in parallel with the diode to raise the effective \$\beta\$ in \$Q_1\$. (But the entire thing will stop working if you make the parallel resistor too small.) Another diode in parallel can also be used, I suppose. I haven't tried that but the effect might be useful, as well, in reducing the total voltage drop a little.

I hadn't run a simulation before, but here's an example output illustrating a difference with a anode-cathode current of about \$50\:\textrm{mA}\$:

So there is a lower circuit voltage drop in the diode-based circuit (which is better) and lower power dissipation, as well (which is also better.)

Yes, it's easy. You would typically want to add base-emitter resistors to one or both transistors to control the trigger and holding current.

Here's a simulated SCR that triggers at about 400uA gate current. 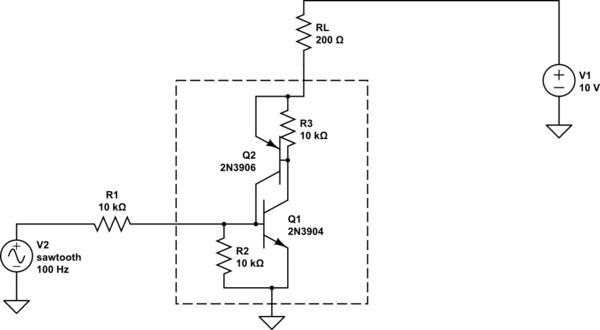 This construction gives you two 'gates'- the top one can be used to make the complement of a normal SCR such as 2N506x, which, if they even exist, are not common.

Note however that you cannot make a triac (also a thyristor) this way.

Note also that all the current flows through the B-E junctions, so observe ratings, and both transistors must be rated for the desired blocking voltage.

Not the answer you're looking for? Browse other questions tagged transistors semiconductors thyristor circuit-theory substitution or ask your own question.

0
Why the voltage suddenly reduces when thyristors change from forward blocking to conduction mode
0
Making LED flash from steady-state signal
1
What are the differences between the NTE102/103 and NTE102a/103a Germanium transistors?

1
Turning ON a Thyristor
0
Rectifier and thyristor
3
Capacitor commutation of thyristor and DC load
1
Thyristor as a traic
0
SCR (thyristor) - Practical Dimmer Circuit
10
What distinguishes an ordinary thyristor from a GTO thyristor?
1
Thyristor not pulling current away
0
Is this thyristor model or circuit wrong?