I need to find the inductor current for t > 0 and initial conditions as in example below. I think it's enough to divide V1 by 5*s and take the inverse Laplace Transform but my answer 3*e^-2*t - 7*e^-t + 4 is not the same as the book answer. It has +3 instead of my +4. It seems to be that book answer adds -1A initial current to my answer but I can't fully understand why it's so. It's clear that the original nodal equation was created with taking initial values of capacitor voltage and inductor current into account and it's not need to make any manipulations to current result, because the nodal difference V1 to ground already takes into account the existence of the inductor's initial current. 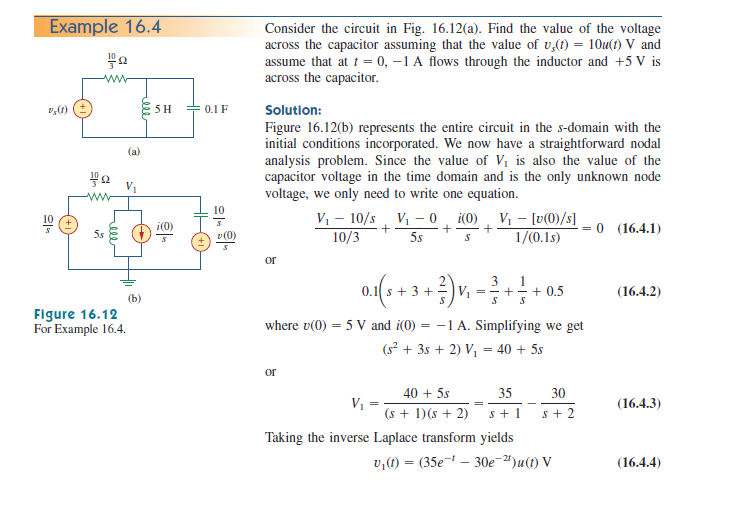 Multisim part of question is placed in another post: Multisim setup transient analysis with initial conditions

Your textbook is correct. The inductor is connected in between the Node V1 and ground. It is modeled as a constant current source i(0)/s in parallel with corresponding inductor reactance. Now, Look at the original circuit. The current through inductor = the current flowing between node V1 and ground. In the below laplace model, it is nothing but the sum of two currents: i(0)/s and V1/5s (Kirchoff's Current Law). V1/5s will give you only the transient part of current through the inductor, while their sum will be the total current through inductor at any time t > 0.

Not the answer you're looking for? Browse other questions tagged current laplace-transform transient or ask your own question.