I am powering a few op-amps from a split supply made from a 7805 and 7905. Before connecting the amps, I measured the outputs from both regulators and got 5V and -5V, respectively. However, after I soldered down the amps, I observe -0.9V at the 7805 output pin (the 7905 functions properly). The 7805 is not getting hot, and I am not measuring any shorts between 5V and -5V, 5V and GND, or -5V and GND. I am measuring 7.5V at the input to the 7805, as expected. I tried replacing the part as well, but this behavior persisted. When I remove the 7805 and connect a benchtop supply in its place, the circuit functions as expected and my supply reads a current draw of about 100mA. I am not sure what else to check. How can I go about solving this?

The schematic is as follows, duplicated 5 times:

Edit: Yes, I know the pinout for the 7905 is wrong. I have rerouted the pins to the correct traces on the board itself, and the 7905 functions properly. 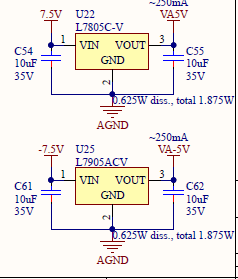 Seems @JohnBirckhead has hit the nail on the head.

You need to add a diode to the output of the LM7805 to ground. The datasheet suggests a 1N400x, but I would use something like a 1N5819 Schottky diode which will prevent almost all current from getting into the substrate diodes.

The effect you are seeing is likely caused by the output terminal being pulled below ground (something that can't happen easily when you don't have a negative supply). Likely that shuts the regulator output down by some internal sneak paths through the substrate isolation diodes.

I usually put diodes like the datasheet suggests into such supplies as a matter of course, even when they are sequenced up and down. Cheap insurance against strange happenings. Often you can use a small dual like BAT54S and protect both regulators.

Incidentally, this behavior may well vary from one supplier to another of the 7805 chip. It's outside the normal range of operation. In a quick test, I was unable to duplicate the behavior OP is seeing even with -200mA applied to the output (Motorola part). OP's part number is apparently ST, which has this warning about "latch-up problems" in the datasheet: 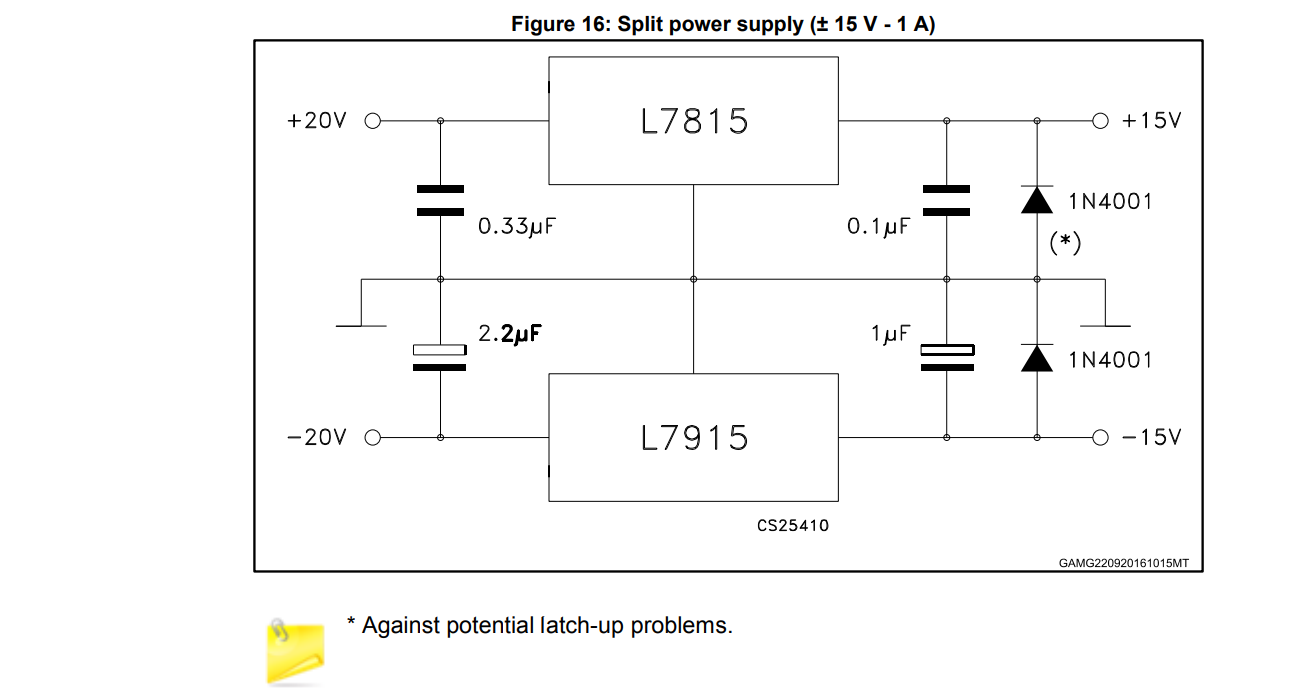 Your pinout is wrong; the 79xx and 78xx don't have input, output and ground on the same pins, but in your schematic, they do.

Not the answer you're looking for? Browse other questions tagged power-supply voltage-regulator debugging or ask your own question.