In my book there is a circuit like the one shown bellow. The author (G. Randy Slone) explains the operation and performance of it but there is still one thing that left me wondering. 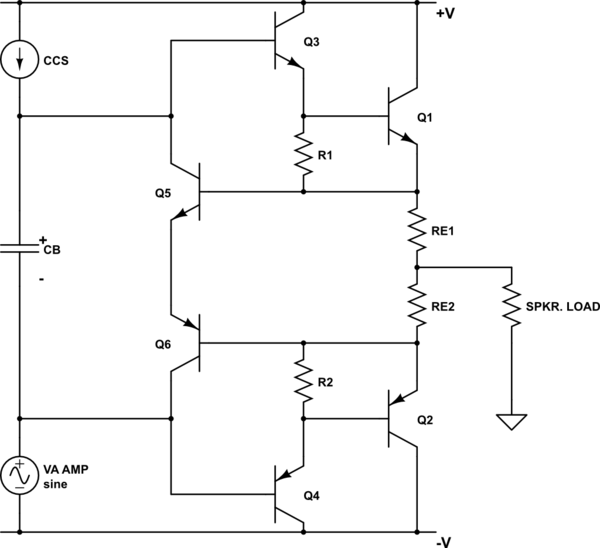 The (AC) signal from VA does directly end up at the base of both Q3 and Q4 through the capacitor CB.

The DC voltage at the base of Q3 and the base of Q4 cannot be the same so we cannot short Q3 and Q4's bases. If we did that then the whole DC biasing of the circuit would be influenced and it would not work anymore. So we cannot short the bases for DC. But we can still short them for AC (the signal), that's what capacitor CB does.

The capacitor CB and the rest of the circuit act like a DC voltage source (like a battery) so the signal at VA also appears at the base of Q3 but with an additional DC-voltage added.

How much is that DC voltage?

Sure but how much voltage will there be across RE1 and RE2?

Not the answer you're looking for? Browse other questions tagged amplifier current-source bias class-a or ask your own question.