Which color puts the least "strain" on an LCD pixel to avoid burn-in/ghosting?

I am developing a user interface on a cheap Kinco color LCD HMI unit. After leaving a test UI on the screen for about 3 days, there was a very decided "ghosting" effect.

I was able to eliminate the ghost outlines by alternating a solid black and white screen over the course of about 2 days. Now the screen is back to normal and the ghosted image does not appear.

Since this HMI will be in service for several years with basically the same screens always in use, I want to build a screen-saver which will prevent ghosting. Note that users will view/interact with the HMI very little, as it's in a remote location and may be visited a couple times per week.

In building a screen saver, should the display constantly alternate between solid black and white screens, or is there a specific color which places the least "strain" on an LCD pixel, which would avoid ghosting and ensure pixels remain as bright and color-accurate as possible? For example, is Black considered "full on" or "full off" by the LCD circuitry and pixels? Would a black or white pixel create more prominent ghost image, or is the issue going to appear for any pixel that does not change over a period of time?

I assume either black or white would be the default/resting state of a pixel (i.e. no driver current applied to the RGB subpixel elements) but I don't know which.

At this point I don't know whether alternating between colors is better or worse than filling the screen with a single, unchanging color. I'm looking to implement whichever scheme preserves the pixel brightness/dynamic response and eliminates ghosting.

Note that I did enable the auto backlight-off feature, but even when the backlight is off, the LCD is still displaying the image.

Your recommendations are appreciated.

I don't think any one color will be more "easy" on your display. The circuit and structure for a LCD monitor are the same for each color, they just have a color filter in front of them. There are other ways to do it with color changing backlights or color wheels, but that doesn't change the advice that the color doesn't matter. 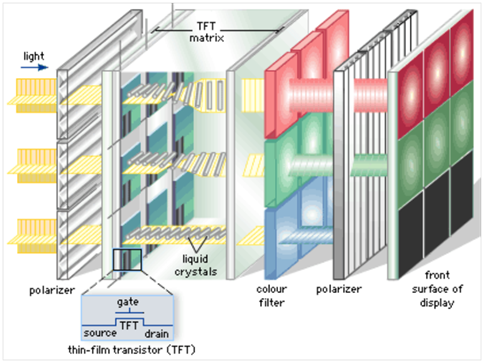 --Edit @Trevor made me look up what the dominant behavior of LCD screens is and I didn't find a definitive answer. "It depends on the resting state of the LCD as to whether they require energy to stop light or to allow light to pass through," was one quote I read on Scientific American's website. What I was trying to say before was it depends on the construction of your LCD as to whether the no power state is black or white. You'd want to consult your datasheet or the manufacturer to find that piece of information and then put it in the off state for your particular device.

It is usually not a big issue in LCDs, they don't really burn in the classic sense, unlike say AMOLED (Spit!).

However the LEDs in the backlight have a finite life, and these far more then the LCD itself tend to determine the life of the display. For this reason my usual screen saver is to just dim the backlight way down.

You seem to have a screen which you say is ghosting? It may be worth having a look at the control chip register map, as you may be getting some DC across the liquid (never a good thing), also is it very cold where this thing is being deployed? LCDs can get very slow to respond in the cold.

One thing I found is that you often get reversed logic between off and on when switching from a TFT to an IPS panel even when using the same controller, make of that what you will.

Something more dynamic like an alternating pixel checkerboard pattern may actually be more effective than a simple fixed pattern.

Moreover, if you can modulate the pattern to be a more sinusoidal transition between the two you may fine the net effect erases the residual faster.

Not the answer you're looking for? Browse other questions tagged lcd touchscreen hmi pixels or ask your own question.

5
How are DACs integrated in color LCD screens?
3
How does color LCD work on the Pokémon Pikachu 2 GS?
1
Is this ST7735 based LCD module broken? (Photo: random color pixels on the entire screen)
2
TFT RGB LCD construction and
1
In LCD technology what is the “duty cycle” of each pixel
1
OLED (or other) screens combined with e-ink