I have a simple constant current source driven by a DAC. Very low frequency, less than 100 Hz changes on the input.

I have had trouble once in a while when the transistor either fails or temporarily stops working correctly. I thought I had a bad batch of 2n2222a transistors, so I substituted that part with a 2n4401, and it seems better. It's very difficult to find the conditions where it fails. The load, in some cases, might be slightly inductive. 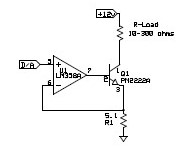 It struck me that perhaps I'm getting an oscillation sometimes, but I can't seem to see that, or a failure, when I have a scope connected.

Anybody have an idea of what might be going on? I'd love to find the problem and hopefully make a change with adding a component (board is pretty full, but I could fit one more on there). If it is an oscillation, would fitting a lower bandwidth op-amp help?

If the load is at the max (10 ohms) it's pushing the current limit of the transistor, but the issue doesn't appear to be happening near full load.

New input after first two responses: I appreciate your thoughts thus far. Actually, the load isn't as bad as it would seem. When the load is less than about 90 ohms, the power to the load is typically 5v, maybe a max of 8 volts, rather than 12 volts. The OpAmp power rails are 5v/gnd. The DAC can go up to about 2.6 v, so current won't exceed about 500 mA.

Sorry about the small graphic, I converted the schematic to a PDF, then copied the part of interest and converted it to a jpg - ended up with low resolution.

With 10 ohm load, and 5.1 ohms in emitter, the maximum current of 0.8 amps exceeds many small-signal device ratings, even when well heatsunk. (hard to extract heat from a plastic package).

At high currents, the Ftau drops and the delay thru the device increases, putting the loop-stability at risk. To avoid this, add 100 ohm resistor in base AND add capacitor from emitter to opamp Vout. Value? 1uF.

You didn't waste any pixels on that schematic. 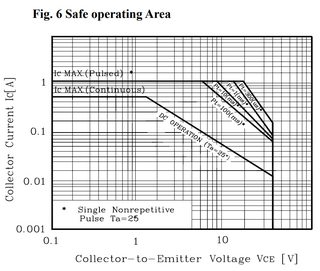 Power excess (causing excessive junction temperature) would seem to be a possibility, but you don't say what the maximum possible DAC output can be. You can protect the transistor against inductive loads with a zener. If the op-amp has a negative rail less than about -5V a diode between base and emitter would be a good idea.

Not the answer you're looking for? Browse other questions tagged operational-amplifier transistors constant-current oscillation or ask your own question.