Difficulties with Class B Amplifier Biasing

Here I am referring to class B output power amplifier. 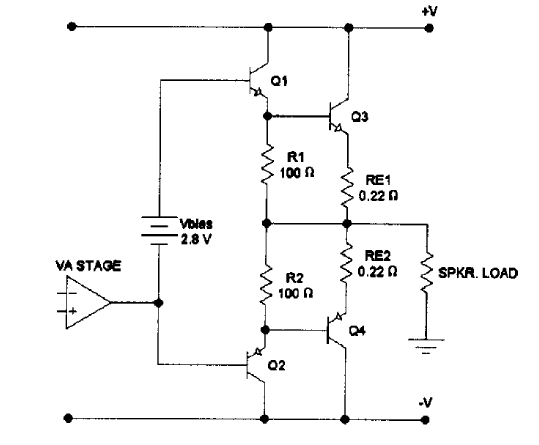 It seems that I only managed to properly bias class A amplifier, but not class B.

There is a simple known circuit which works as a 'programmable zener'. Below is the principle diagram: 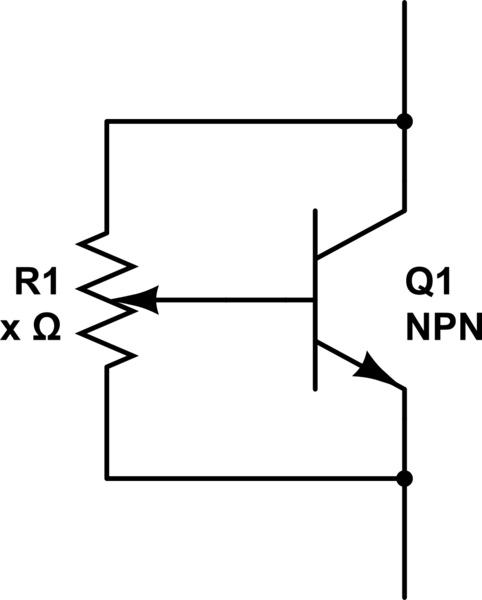 For a real application the variable resistor may be split in three parts to get more accurate control. By varying the resistor you can set the 'zener' voltage between the bases of the two transistors Q1 and Q2 and as such control the quiescent current.

Forgot: Just as a real zener it needs a resistor at the top.

In the good old days that transistor was physically mounted on the heatsink so you also had thermal compensation. Took me a while to find an image on the www but here is one: 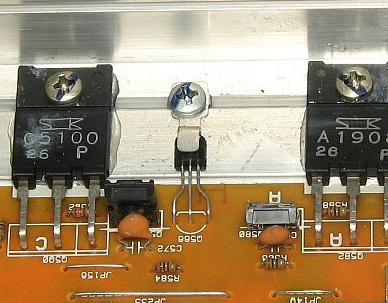 Post edit
As mentioned in the comment below you have to be careful with this circuit. Before first time use you must make sure the variable resistor set such that the base is at the collector voltage. Thus there is minimal voltage drop. Then you turn the resistor until the bias is 'correct' which normally means you no longer see (scope) hear (ears) the distortion in the output signal. You can turn it a bit further which will increase the quiescent current in output stage. (It will get more the characteristic of a class A amplifier.)

If each transistor has a gain of 50, for example, then the current the opamp has to source and sink is roughly 50 * 50 = 2,500 times less than what the load draws. For example, if the load is drawing 1 A, then the opamp only needs to source 400 µA.

You wouldn't want the opamp having to suddenly jump 2.8 V when the waveform switches between positive and negative. The opamp can't do that suddenly, so there would be a small dead time at the zero crossing, which would add distortion to the output signal.

The solution used by this circuit is to put a 2.8 V source between the inputs to the high and low side drivers. With 2.8 V difference in drive level, the two output drivers will be just at the edge of being on at 0 output. A little higher input and the top driver will start sourcing significant current. A little lower, and the bottom driver will start sinking significant current.

One problem is getting this offset just right to eliminate the input jump required at zero crossings, but not turn on both drivers so much that they end up driving each other. That would cause useless current to flow and dissipate power that isn't going to the load. Note that 700 mV is just a rough value for the B-E drop. It's reasonably constant, but it does change with current, and also with temperature. Even if you could adjust the 2.8 V source exactly, there isn't a single exact value to adjust it to.

This is what RE1 and RE2 are for. If the 2.8 V offset is a little too high and significant quiescent current starts flowing thru both the top and bottom drivers, then these resistors will have a voltage drop across them. Whatever voltage appears across RE1+RE2 directly subtracts from the 2.8 V offset from the point of view of the two drivers.

Even 100 mV can make a significant difference. That will be caused by 230 mA of quiescent current. Note also that 700 mV is probably on the low side, especially for the power transistors when they carry significant current.

All in all, the 2.8 V source is meant to keep each of the top and bottom drivers "ready", without turning them on enough so that they start fighting each other and dissipating a lot of power.

Of course, everything is a tradeoff. In this case you can trade off more quiescent current for a little less distortion.

Ideally, in class B one side shuts off completely when the other starts taking over. That almost never happens in practice, but this scheme is reasonably close to it.

The difference between class A and class B is the quiescent current through the last stage.

If you make the quiescent current zero then only Q3 or Q4 supplies current when a signal is present. This is class B.

If you make the quiescent current so large that for very large signals (even the largest) both Q3 and Q4 never have an Ic = 0 (are never off), we have class A.

There's also class AB which can be anywhere between class A and class B.

How to set this quiescent current?

That is done by Vbias.

Some examples how Vbias can be implemented: 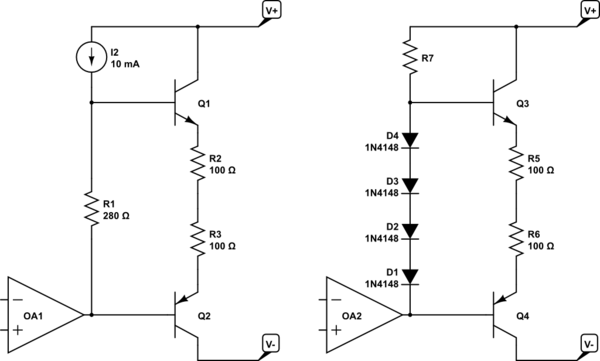 The current source can easily be made with a PNP current mirror and a biasinf resistor.

You have to understand the output topology well in order to know how to create the biasing for it.

Although someone did mention that your schematic example has the BJTs arranged in Darlington fashion (with added turn-off speed-up resistors), they didn't tell you that such an arrangement almost always has a better topology. So you'd almost never use that topology to begin with. Or, in short, there's no point struggling to understand it in order to bias it.

Why use a Darlington:

Why not to use a Darlington:

The last reason is the main reason about why not to use a Darlington here. If there were no alternatives, then you'd merely be stuck with the idea if you wanted its single advantage.

If you want the high current gain of the Darlington arrangement, then it is almost always better to use the Sziklai arrangement, instead. It looks like this:

This also provides similar high current gain and also cannot saturate below about one diode drop, but also includes the following:

You already have some comments about how to bias your circuit. Similar ideas may also be used with the Sziklai driver circuit shown above, but you won't require quite as much biasing voltage difference.

Also, none of the comments about biasing circuits here have addressed themselves to the impacts on your circuit due to temperature variations, while operating. And this may be fairly important to consider. An added collector resistor to the simpler \$V_{BE}\$ multiplier (and tapping off at the collector side of that added resistor, now) can provide a mechanism by which you can make adjustments to match up the behaviors of the multiplier with the variations on the output stage so that the quiescent current is relatively stable over temperature. (Assuming you thermally couple the multiplier BJT to the output BJTs.) And it also can add compensation for the Early Effect, as well. 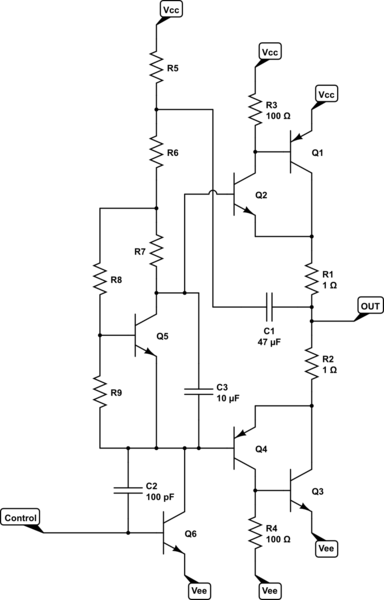 You'd adjust \$R_7\$ and \$R_8\$ and \$R_9\$ in order to set the biasing voltage difference required (arranged so that when quiescent the voltage drop across \$R_1\$ and \$R_2\$ would be about \$50\:\textrm{mV}\$ each -- after you decide on how to size them in the first place -- not discussed here, yet.) You'd also adjust \$R_7\$ itself (and, as a consequence of that, also perhaps \$R_8\$) in order to match up the thermal variation behavior to maintain that voltage drop across \$R_1\$ and \$R_2\$ when you use a hair-dryer or some other heat source on this entire output stage. (I've assumed that you've thermally coupled the BJTs together on a single heat sink.) \$C_1\$ provides some useful bootstrapping and \$C_3\$ provides an AC bypass across the \$V_{BE}\$ multiplier for the bases into the two output Sziklai quadrants.

The above assumes that you really do have bipolar supply rails and a grounded, DC coupled load. I've also not shown the negative feedback that is probably going to be required, eventually. Things would be somewhat different if the load is AC coupled and you have only a single supply rail to work with.

Actually the class B amplifier doesn't has a base bias. The bias occurs at AB class. But you can bias the base in many ways.

If you're using an op amp just like in the image, you could just use feedback. It makes the output equals to the input, just like a buffer but with a power stage. 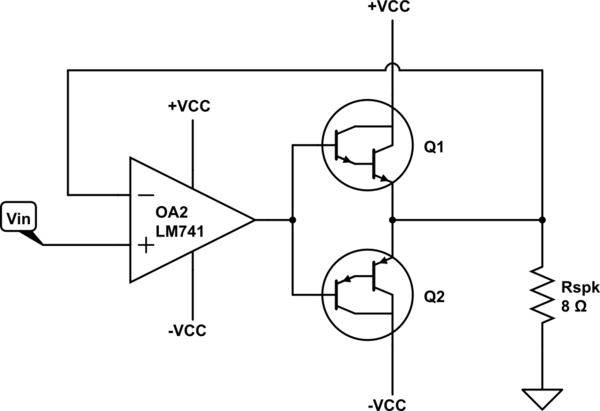 You could also use two voltages sources. 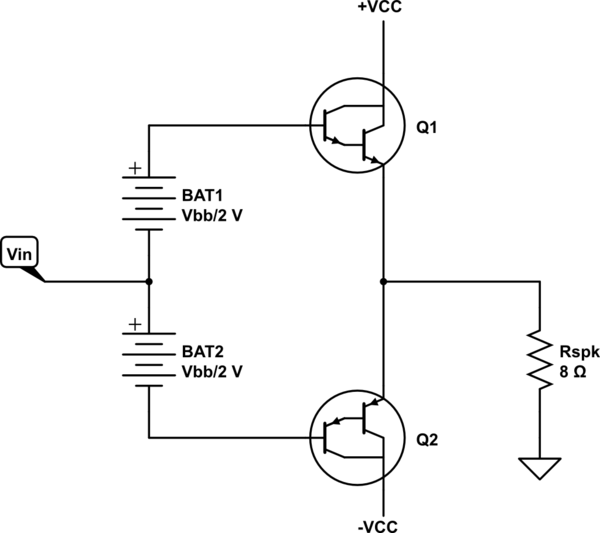 You could use diodes and a constant current source. 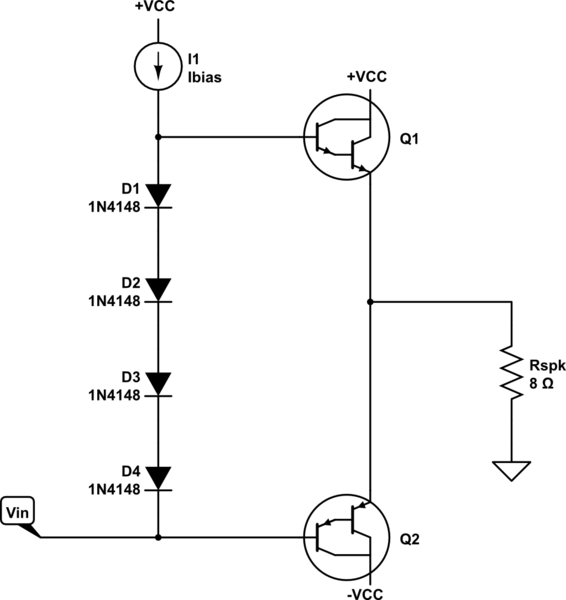 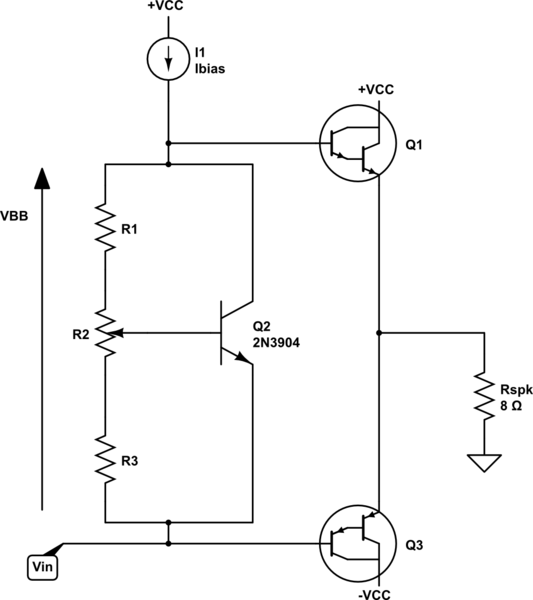 NOTE: The R2 resistor is for fine adjust.

class B is defined as 180 deg conduction angle - so class B is biased to the point of conduction - otherwise its really class C (especially for small signals). The emitter resistors are key to both biasing stability and to allowing each device to turn off during the opposite half cycle.

Not the answer you're looking for? Browse other questions tagged biasing class-b-amplifier power-output-stage or ask your own question.

0
Bias-setting on valve amplifier with dual negative bias supplies
2
Class B power amplifier using only Nch FETs
6
Push-pull power amplifier on complementary darlingtons
0
How to make amplifier (almost) Beta independent?
1
Difficulties in biasing MOSFET push-pull amplifier
5
Confusion between Class B and Class AB Amplifier
0
How to calculate cutoff frequency for a high pass filter in DC biasing circuit
1
In a class C amplifier, how does RB biases the base of transistor?
1
Where do input bias currents flow and what voltage drops do they create?