How to tell if a chip's heat sink can be grounded

I'm putting together a circuit for a TI LM3549. It's an LED driver, so I assume there will be some amount of heat to manage, though the word heat doesn't appear anywhere in the datasheet, nor does the heat tab (or whatever the appropriate term for the slug on its underside is) have a corresponding pin number or name. Given this lack of information, I just left it floating. However, looking at the sample schematic on TI's evaluation board for this guy, I see a pin named that doesn't exist on the schematic - HTAB, and it's tied to ground: 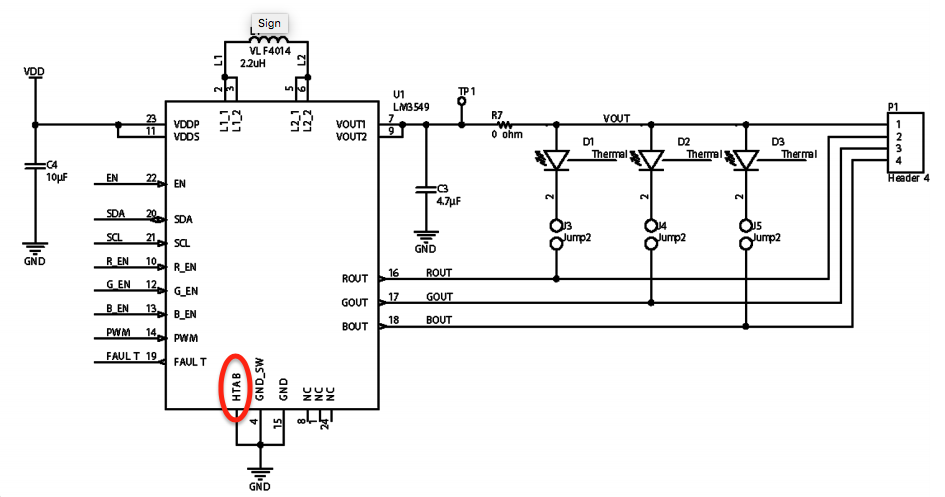 I'm making the assumption that it's that slug, and that they're grounding it to link it to a larger copper area for heat dissipation. So, two questions:

In general, the thermal pad is grounded. Your interpretation of the missing information is correct.
Apparently, you are supposed to read some application note that is not referenced from the datasheet.

Yes it is really unclear on the spec sheet and the app-note does not help either.

Without more information or calling the manufacturer you would need the part in hand to test it.

If you plan on going ahead before you get the parts, you really don't want to leave a big copper pad like that floating. Which is why it may be grounded on that schematic, but not shown on the part info, it may not be internally connected at all but just a thermal pad.

If in doubt it would be better to route it out through a small cap or resistor you can short out later when you have the parts in hand.

Adding the extra pin to the symbol will also make life a lot less confusing for the PCB designer later too.

Not the answer you're looking for? Browse other questions tagged datasheet or ask your own question.

4
Ground as Heat Sink
2
Reading datasheets and applying Ohm's Law
1
Transistor letting 12Volts through collector->emmiter withouit being damaged
0
Intel 8259A: why use A0 when there's nothing to address?
0
What are SD/SS, delay, and flag pins on LM2596?
0
How can I tell from a datasheet if a thermocouple amplifier IC will work with a grounded thermocouple?
0
BA3121: Ground loop supression is great however very thin audio quality
3
Additional V+ pin on ALD1106
1
Figuring out IC pinout from the datasheet