I am using an AGM deep cycle battery 130Ah 12V connected to 200W solar panels and a 500W inverter to power electrical devices such as fans, laptops and lamps. The inverter has an automatic cutoff feature at a nominated voltage. I understand that deep cycle batteries should not be discharged below 12V (approximately 50% SOC). I have noticed that when the inverter is in a state of providing charge that the measured battery voltage is considerably lower than that measured if I switch the inverter off. Sometimes the measured battery voltage can jump as high as 0.5 to 1V when the inverter is powered off while it is powering devices. On this basis, I have set the inverter's auto cut off setting to 11.5V. Sometimes the voltage drops to 11.5V or less and I lose power even though the battery's actual voltage is much higher.

If the battery should not be discharged to less than 12V, does this refer to the battery's resting voltage or the lower voltage that I am seeing while it is powering devices?

What is a safe level to set for the inverter's auto cutoff voltage so that I don't destroy the battery and also to prevent devices from cutting out while the battery still has a sufficient SOC?

I don't have the battery's datasheet handy. This information is available on the battery itself:

Battery aging is inevitable. It occurs during charge transfers and life cycles reduce 50% for every 10'C rise above room temp and to some extent by the minimum % DOD or cutoff voltage you choose.

As always, refer to your AGM datasheet.

This datasheet from Victron shows the the number of Charge cycle always increases by using a lower %Depth of Discharge (DoD). This implies a higher "resting" cutoff voltage gives longer life. But how much? When I multiply the # of cycles from the barchart by the amount of charge used (DoD) the total life cycle charge goes up from 300 effective total charges to 435. 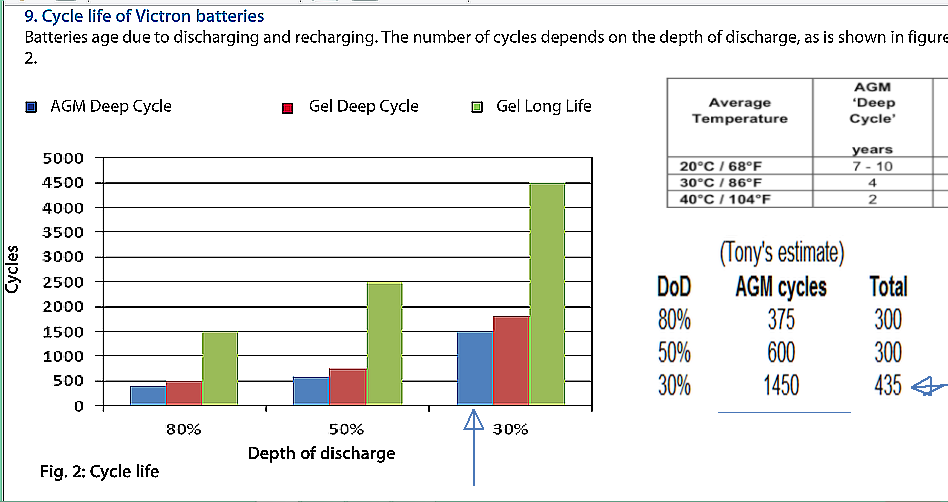 ( measurements taken from bargraph by counting pixels with I_view)

Conclusion: Reducing your cutoff will extend inverter runtime but also reduce battery number of days of charge life, so you lose time later.

If you need more capacity, use more batteries rather than lower the cutoff, but if desperate, you can reduce cutoff to 10.8V for the best short term capacity.

Essentially, what you are trying to do is cutoff before the state of charge (SOC) gets too low. The problem is that the correspondence between battery voltage and SOC depends on several variables, including details of the battery chemistry, temperature, load, etc.

If I were in your situation, I would just lower the cutoff a bit to get a bit deeper discharge. I think most likely you are not damaging your battery excessively. But for the record, here are some more systematic ways to approach this.

What you want to do, is somehow figure out what is the SOC when you cutoff at 11.5V with your current load. One way to do this would be to isolate the battery after the inverter cuts off. Let it sit at room temperature for 24 hours and measure the open circuit voltage at the end of that period. Then look at a chart for your battery or a very similar battery to determine SOC from voltage.

Because it is an AGM battery, you do not have access to the electrolyte and cannot measure density of the electrolyte as you could with a flooded lead acid battery. But for a flooded battery, that would be an option to determine true SOC. They sell tools for this (Battery Hydrometer).

Another idea is to actually measure and integrate net discharge while you are using the battery, from the time it is full to the time the inverter cuts off. This will tell you how many amp-hours have been removed from the battery, and you can use the battery capacity to compute state of charge. For example, 5A for 20 hours = 100 Amp-hours. Since the capacity is 130 Amp-hours, the SOC would be (130Ah - 100Ah) / 130Ah = 23%. Note that capacity depends on discharge rate. The listed capacity of 130Ah is based on a 20 hour discharge time (6.5A for 20 hours). So to be accurate, you would want to use the capacity based on actual discharge rate, if that information is available. So that could complicate matters.

The other idea is to estimate capacity during recharge. I have done this in the past with batteries that were recharged with no load on them. If the charger does constant current of 20A for 5 hours, then transitions to constant voltage, I would estimate that it was about 120 Ah of restored capacity (5 hours @ 20A + 20% to allow for the CV top-off phase). This is probably the least accurate way to do this. But sometimes it is the easiest way, because you don't need to get at the battery terminals. You just watch LED's on the charger, and assume that the charger's CC rating is relatively accurate.

Not the answer you're looking for? Browse other questions tagged voltage batteries battery-charging lead-acid soc or ask your own question.

14
how can I try to revive this AGM deep-cycle battery which started to perform dramatically below specifications?
3
Determine lead acid battery safe float charge level for a range of state-of-charge
0
Can a lead acid battery charger and the battery be used as a UPS?
0
How can I safely charge a 12V deep cycle battery with a wind generator?
0
Precautions when connecting both an inverter and solar panel to AGM deep cycle battery simultaneously
1
Advantages of chaining another battery to 130Ah AGM deep cycle 12V battery
0
What is the actual capacity & charging current of a given deep cycle lead acid battery?
0
Can a 12V AGM battery be damaged by too light a load and relying exclusively on a 10.5V low voltage cutoff?