Steps taken so far: I've read that using a resistor based system to step down from 12V to 5V leads to a lot of heat inefficiency so I purchased a SMAKN 12V to 5V 3A voltage regulator. I can simply solder the + & - terminals of a female USB port to this regulator but I thought it would be more efficient to split the 5V 3A output into 5V 1A and 5V 2A to charge a phone AND tablet at their desired wattages.

Confused part: Googling this leads to surprisingly few results, most of which discuss using PSUs where the answers generally revolve around picking a more specific PSU.. [Edit]: While other answers do discuss the underlying solution, they are specific to choosing a PSU and don't get into the details of how to construct a multi-device USB charging circuit.

Jump back on google to find a 5 ohm and 2.5 ohm resistor and...I see a number of results some of which say to operate at 1/4 Watt which is clearly way too low.

I called local electronic shops - they all seemed surprised that I needed such a low resistance resistor with such high wattage.

All of which adds up to me thinking I'm going about this incorrectly or am violating some basic principle? Are my resistors (R1 = 5 ohm, R2 = 2.5 ohm) correct? Are there such resistors for 5V circuits? Is this design going to lead to power loss if only of the two USB ports are in use?

You have a fundamental misunderstanding here, that is why there are so few results.

You do not need to split anything. No, it will not be more efficient to split it into a 5V 1A port and a 5V 2A port. Why would that be more efficient? And I don't understand what you think you're splitting. Loads (like a phone or tablet) draw varying amounts of current, and will have a maximum current draw rating. They will never draw more than this, but will draw much less (like when fully charged, for example). The device will draw however much current it needs, and beyond that, it needs 5V. You can't limit current using resistors because the loads aren't linear. Resistors limit current by reducing the voltage, but a phone or tablet will simply stop using the port if the voltage goes outside the USB spec.

When you see a USB port rated at 1A, that means it can provide UP TO 1A. You need an integrated circuit to shut off the port using a MOSFET switch in the event of over draw. You need active circuitry if you want to limit the current draw from the port, you cannot do it using resistors.

But, there is no reason to do this. You have one 5V power supply that can provide 3A. Specify the two ports as having a combined maximum current of 3A, and connect them in parallel. You're done.

Now, USB ports cannot provide more than 500mA of current unless you signal the device it can draw more. Any phone or tablet that conforms to the USB spec will refuse to draw more than 500mA from either of your ports, no matter what you do.

You have to use resistors to make voltage dividers that yield specific voltages across the D+ and D- USB pins, and depending on which you chose, will signal different devices a certain kind of charger port is available. Unfortunately, many tablets use 2.1A, not 2A, so to call a 2A port a tablet port is not really correct. It's insufficient for a great many tablets, while all smart phones expect a 1A charging port minimum. So you're 100mA shy of having the capacity for a true phone and tablet charging device. It might charge YOUR tablet, and if that is all you want, then no worries. But if you plan to have other people use this, you need a slightly beefier 5V regulator.

As for signaling the maximum capacity for each port... well, you can do that using resistors, but high resistance, low wattage ones. They create a voltage divider with the D+ and D- pins of the USB port connected in the middle. However, there is no standard voltage value you want on the D+ and D- pins, it's not part of the USB spec. So Apple generally has its own specific resistor values that are different from android devices, and Samsung has its own thing for its tablets... so its impossible to create a true universal charging port using resistors alone. You have to use a smart port IC, which will detect the type of device connected to a USB port and set the voltages on D+ and D- appropriately. The TPS2546 is one such IC.

If you only plan to use this for yourself, and only need it to work with your specific devices, then you can just use a resistor divider. There is one for 1A Apple devices, then that same divider but with the D+ and D- voltages swapped yields a port for charging 2A apple devices. There is one for sony devices, and one for samsung devices. Then European devices all need only a 200 ohm resistor shorting D+ and D-, by law.

Here is an example of what I mean: 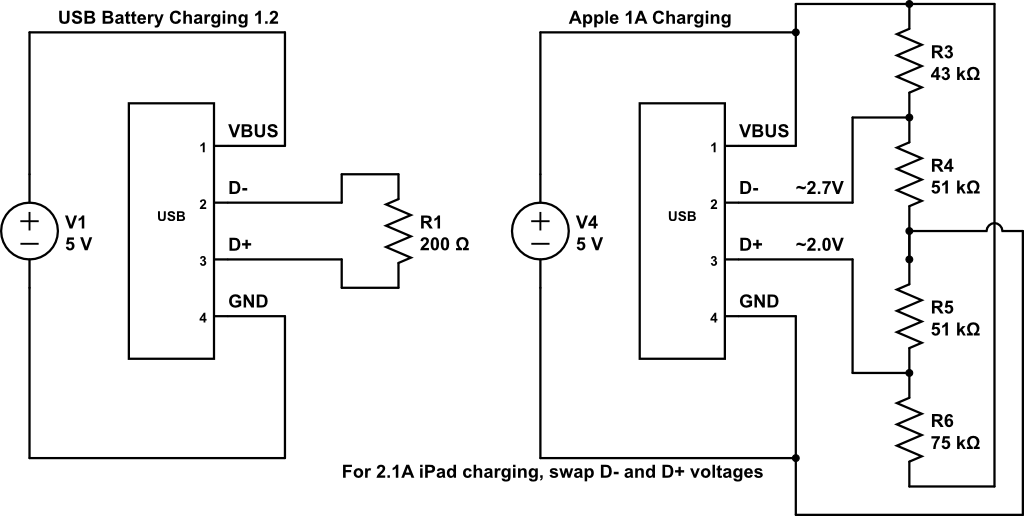 I don't know what device(s) you want the ports to work with, but if you simply google the voltages for a given device and current, you can find the information you need. I also highly recommend you read this app note, which is a nice quick and dirty crash course on all this.

Unfortunately, this is one of those situations where something that ought to be simple... is not. C'est la vie.

If the phone and tablet are designed to be charged from a 5 volt USB source, they will draw whatever current they need from your 5 volt source. There is no need for you to try to limit or split the current as you suggest.

The devices regulate charging power themselves, you can just connect them to the 5V rails directly. For the devices to "quick charge", you need to connect additional circuitry to the data lines of the USB port to allow the device to detect the maximum current it is allowed to use.

If you want to make the device safe to use, you need to detect the current, compare it to the maximum allowed on this port, and turn off the port if the device draws more than that. This is a fair bit more complex and expensive to build than buying a ready-made USB charger.

Your calculations based on Ohm's law are correct but not for the situation you imagined. If you put 5 Ω in series with your load the only way to get 1 A through it is to reduce the load resistance to zero and have no voltage available for your load.

Figure 1. The only way to get 1 A through 5 Ω on a 5 V supply is to connect it across the supply. Similarly the 2.5 Ω can only pass 2 A when directly across the 5 V supply. There will be no voltage left for the load.

When we use regulated supplies we try to eliminate the series resistance as this would otherwise cause the voltage to drop with increasing current. Instead we regulate the voltage to maintain the 5 V supply from zero to rated current.

As others have pointed out, the current drawn is determined by the charging circuitry in the phone and tablet - not by your external supply.

Be aware that with only USB +5 V and GND that most devices will only draw 0.5 A as this was the original USB specification. To draw more current signals have to be present on the D+ and D- wires to indicate the power rating of the supply.

You can buy three terminal DC-DC converters, (buck). Get one for each line. Maybe in parallel if you need more current for one line.

Look at the P7805 or V7805 DC to DC converters from CUI or Recom, they do 36 to 6V in and 5V out. Don't worry about the resistors, the voltage regulates, if you really built this circuit that you describe above then there would be a 5Ω*1A=5V drop across the resistor and the USB device would get little of that current. Or because it's a variable load it the resistor would get half of the voltage and the usb load would get half. Either way it would cause a voltage drop on the USB device, which is bad. Review Kirchoffs laws

Not the answer you're looking for? Browse other questions tagged power usb dc amperage 5v or ask your own question.

274
Choosing power supply, how to get the voltage and current ratings?
50
What is the ideal way to handle data pins D+ and D- on a USB power adapter to be compatible with fast charging on devices?

2
7805 Regulated DC Power for two devices
3
How can I use a greater USB charge current without device enumeration?
1
how can I current-limit a Raspberry Pi 2 USB host port so phones/tables do not try to charge
1
USB OTG with occasional charging
4
Is it generally safe to use any USB charger with any USB device? How does device know what current is charger able to provide?
1
Choosing an SMD Resettable fuse for a 2.5 Ampere USB charger port
1
Options to protect Mobile Phone from over charging which is causing battery failure